There are many uses for multiplexers. Wherever a number of signals, or logic states, need to be passed down a single communication channel such as a wire, a radio channel, or a telephone, some form of multiplexing is used. Sometimes the multiplexing and de-multiplexing can be very complex, much more so than the circuit in Figs 4.2.2 and 4.2.3. In some systems, data is transferred over very long distances, in others such as transferring data within computers, the distances may be very short. Fig. 4.2.4 shows a 4 to 1 line multiplexer, which enables a 4-bit binary number to be passed over 3 lines, one for data and two for control. 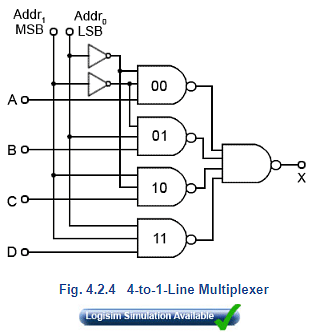 Larger multiplexers, such as 4, 8 or 16 bit types, which are readily available in IC form, use a method of ‘addressing’ a particular data gate using a binary code. Fig 4.2.4 shows a 4 to 1 multiplexer where, in order to output data from a particular input, one of the four 3−input NAND gates must be enabled by a logic 1 on two of its inputs, leaving the third input for data. To achieve this two address lines are used, giving four possible combinations of 1 and 0. Look carefully at the address lines. When both are at logic 0 the two inverters (NOT gates) produce logic 1s at two of the inputs to NAND gate 00. None of the other NAND gates addressed by these lines has both its address inputs at logic 1. If the least significant bit (lsb) of the address is 1 and the most significant bit (msb) is 0 then NAND gate 01 is enabled. Because two address lines can give four possible binary combinations, you should find that, counting from the top, gate 00 is enabled by the address inputs 002, gate 01 by address 012, gate 10 by 102 and gate 11 by 112.

There are many commercially available multiplexer ICs available with a variety of extra features. The following is a list of datasheets for some basic multiplexers similar to those described in this article.

74HC153  4To 1 multiplexer from Texas instruments

74HC352Dual 4 to 1 Multiplexer from Texas instruments