The document NCERT Exemplar - Anatomy of Flowering Plants Notes | EduRev is a part of the NEET Course Biology Class 11.
All you need of NEET at this link: NEET

Q.3. Match the following and choose the correct option from below 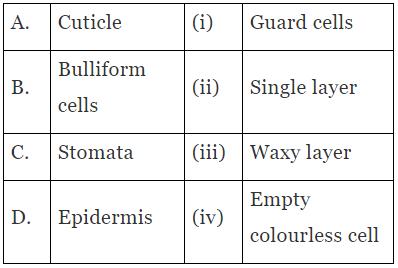 Q.1. Product of photosynthesis is transported from the leaves to various parts of the plants and stored in some cell before being utilised. What are the cells/ tissues that store them?Ans. ParenchymaQ.2. Protoxylem is the first formed xylem. If the protoxylem lies next to phloem what kind of arrangement of xylem would you call it?Ans. ExarchQ.3. What is the function of phloem parenchyma?Ans. The phloem parenchyma stores food material and other substances like resins, latex and mucilage.Q.4. What is present on the surface of the leaves which helps the plant prevent loss of water but is absent in roots?Ans. Cuticle is present on the surface of the leaves which helps the plant prevent loss of water but is absent in roots.Q.5. What is the epidermal cell modification in plants which prevents water loss?Ans. In grasses, certain adaxial epidermal cells along the veins modify themselves into large, empty, colourless cells. These are called bulliform cells or motor cells. Bulliform cells help in folding and unfolding of grass leaves.When the bulliform cells in the leaves have absorbed water and are turgid, the leaf surface is exposed. When they are flaccid due to water stress, they make the leaves curl inwards (inrolling) to minimise water loss (transpiration).Q.6. What part of the plant would show the following:(a) Radial vascular bundle(b) Polyarch xylem(c) Well developed pithAns.
(a) Radial vascular bundle: Root(b) Polyarch xylem: Monocot root(c) Well developed pith: Dicot stem and monocot rootQ.7. What are the cells that make the leaves curl in plants during water stress?Ans. Bulliform/motor cellsQ.8. What constitutes the cambial ring?Ans. Interfascicular cambium + intrafascicular cambium.Q.9. Give one basic functional difference between phellogen and phelloderm.Ans. Phellogen is a couple of layers thick. It is made of narrow, thin-walled and nearly rectangular cells. Phellogen cuts off cells on both sides. The outer cells differentiate into cork or phellem while the inner cells differentiate into secondary cortex or phelloderm.Q.10. Arrange the following in the sequence you would find them in a plant starting from the periphery—phellem, phellogen, phelloderm.Ans. Phellem → phellogen → phelloderm.Q.11. If one debarks a tree, what parts of the plant is being removed?Ans. On debarking a tree, all tissue exterior to vascular cambium gets removed (i.e., periderm and 2° phloem).Q.12. The cross-section of a plant material showed the following features when viewed under the microscope.(a) The vascular bundles were radially arranged.(b) Four xylem strands with exarch condition of protoxylem.To which organ should it be assigned?Ans. Dicot rootQ.13. What do hard wood and soft wood stand for?Ans. Gymnosperm wood is called softwood due to absence of vessels (therefore it is called non-porous wood). Dicot angiospermic wood is called hardwood because it possess abundant vessels.

Q.2. What is the commercial source of cork? How is it formed in the plant?
Ans. Commercial source of cork is oak (Quercus suber). As the stem continues to increase in girth due to the activity of vascular cambium, the outer cortical and epidermis layers get broken and need to be replaced to provide new protective cell layers. Hence, sooner or later, another meristematic tissue called cork cambium or phellogen develops, usually in the cortex region. Phellogen is a couple of layers thick. It is made of narrow, thin-walled and nearly rectangular cells. Phellogen cuts off cells on both sides. The outer cells differentiate into cork or phellem.

Q.4. What are the characteristic differences found in the vascular tissue of gymnosperms and angiosperms?
Ans.

Q.5. Epidermal cells are often modified to perform specialized functions in plants. Name some of them and the function they perform.
Ans.
(i) Root hairs: The root hairs are unicellular elongations of the epidermal cells and help absorb water and minerals from the soil.
(ii) Stem hairs or trichomes: On the stem the epidermal hairs are called trichomes. The trichomes in the shoot system are usually multicellular.
They may be branched or unbranched and soft or stiff. They may even be secretory. The trichomes help in preventing water loss due to transpiration.
(iii) Bulliform cells: In grasses, certain adaxial epidermal cells along the veins modify themselves into large, empty, colourless cells. These are called bulliform cells. When the bulliform cells in the leaves have absorbed water and are turgid, the leaf surface is exposed. When they are flaccid due to water stress, they make the leaves curl inwards to minimise water loss.

Q.6. The lawn grass (Cynodon dactylon) needs to be mowed frequently to prevent its overgrowth. Which tissue is responsible for its rapid growth?
Ans. Intercalary meristem: The meristem which occurs between mature tissues is known as intercalary meristem. They occur in grasses and regenerate parts removed by the grazing herbivores.

Q.7. Plants require water for their survival. But when watered excessively, plants die. Discuss.
Ans. Irrigation without proper drainage of water leads to waterlogging in the soil. Besides affecting the crops, waterlogging draws salt to the surface of the soil. The salt then is deposited as a thin crust on the land surface or starts collecting at the roots of the plants. This increased salt content is inimical to the growth of crops and is extremely damaging to agriculture and plants may die.

Q.8. A transverse section of the trunk of a tree shows concentric rings which are known as growth rings. How are these rings formed? What is the significance of these rings?
Ans. The activity of cambium is under the control of many physiological and environmental factors. In temperate regions, the climatic conditions are not uniform through the year. In the spring season, cambium is very active and produces a large number of xylary elements having vessels with wider cavities. The wood formed during this season is called spring wood or early wood. In winter, the cambium is less active and forms fewer xylary elements that have narrow vessels, and this wood is called autumn wood or late wood.
The spring wood is lighter in colour and has a lower density whereas the autumn wood is darker and has a higher density. The two kinds of woods that appear as alternate concentric rings, constitute an annual ring. Annual rings seen in a cut stem give an estimate of the age of the tree.

Q.10. What is the difference between lenticels and stomata?
Ans. At certain regions, the phellogen cuts off closely arranged parenchymatous cells on the outer side instead of cork cells. These parenchymatous cells soon rupture the epidermis, forming a lensshaped openings called lenticels. Q.14. Palm is a monocotyledonous plant, yet it increases in girth. Why and how?
Ans. A palm tree is a monocotyledonous plant and like all other monocots the stems do not have primary cambium in the vascular bundles. However, with age, the tree grows in diameter, though slowly, as a result of the growth of the ground tissue. A secondary cambium may be formed in the hypodermal region of the stem. The later forms the conjunctive tissue and patches of meristematic cell. The activity of the meristematic cells result in the formation of secondary vascular bundles. 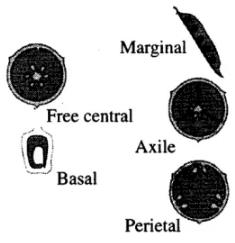 Q.2. Deciduous plants shed their leaves during summer or in autumn. This process of shedding of leaves is called abscission. Apart from physiological changes what anatomical mechanism is involved in the abscission of leaves.
Ans. Anatomical mechanism involved in the abscission of leaves:
(1) Structural: In deciduous trees, an abscission zone, also called a separation zone, is formed at the base of the petiole. It is composed of a top layer that has cells with weak walls, and a bottom layer that expands in the autumn, breaking the weak walls of the cells in the top layer. This allows the leaf to be shed.
(2) The loss of chlorophyll may also contribute to the abscission process.
(3) Hormonal: Abscisic acid to be the hormone that stimulates abscission (for which the hormone was named).

Q.3. Is Pinus an evergreen tree? Comment.
Ans. Yes, Pinus trees are evergreen, coniferous resinous trees. The leaves in gymnosperms are well-adapted to withstand extremes of temperature, humidity and wind. In conifers, the needle-like leaves reduce the surface area. Their thick cuticle and sunken stomata also help to reduce water loss. Unlike deciduous plants, Pinus do not shed their leaves so it is an evergreen tree.

Q.4. Assume that a pencil box held in your hand, represents a plant cell. In how many possible planes can it be cut? Indicate these cuts with the help of line drawings.
Ans. When any plane passing through the central axis of the plant cell divides the cell into two identical halves, it is called radial symmetry. If the plant cell can be divided into identical left and right halves in only one vertical plane, exhibit bilateral symmetry. Q.5. Each of the following terms has some anatomical significance.
What do these terms mean? Explain with the help of line diagrams.
(a) Plasmodesmata
(b) Middle lamella
(c) Secondary wall
Ans.
(a) Plasmodesmata are the protoplasmic strands between adjacent plant cells. Plasmodesmata connections help in movement of substances between cells.
(b) The middle lamella is a layer mainly of calcium pectate which holds or glues the different neighbouring cells together. Middle lamella is made up of calcium pectate (mainly) and magnesium pectate.During ripening a fruit becomes soft and pulpy due to dissolution of middle lamella.
(c) The cell wall of a young plant cell, the primary wall is capable of growth, which gradually diminishes as the cell matures and the secondary wall is formed on the inner (towards membrane) side of the cell. Secondary wall may have the deposition of lignin. Secondary wall help in the differentiation of the cell.