The document NCERT Exemplar - Arithmetic Progressions Class 10 Notes | EduRev is a part of the Class 10 Course Mathematics (Maths) Class 10.
All you need of Class 10 at this link: Class 10

Q.1. Find the sum of two middle most terms of the A.P. 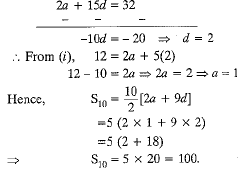 Multiplying equation (ii) by 6 and then subtracting from
(i), we have 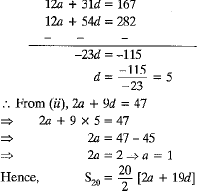 Q.6. The students of a school decided to beautify the school on the Annual Day by fixing colourful flags on the straight passage of the school. They have 27 flags to be fixed at intervals of every 2 m. The flags are stored at the position of the middle most flag. Ruchi was given the responsibility of placing the flags. Ruchi kept her books where the flags were stored. She could carry only one flag at a time. How much distance did she cover in completing this job and returning back to collect her books? What is the maximum distance she travelled carrying a flag?
Ans. n - 27
Middle most term = 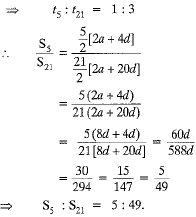 Q.8. Show that the sum of an AP whose first term is a, the second term b and the last term c, is equal to