The document NCERT Exemplar - Matter in Our Surroundings Class 9 Notes | EduRev is a part of the Class 9 Course Science Class 9.
All you need of Class 9 at this link: Class 9

Q.1. Which one of the following sets of phenomena would increase on raising the temperature?(a) Diffusion, evaporation, compression of gases(b) Evaporation, compression of gases, solubility(c) Evaporation, diffusion, expansion of gases(d) Evaporation, solubility, diffusion, compression of gasesAns. (c)Rate of evaporation, diffusion and expansion of gases increase with increase in temperature.Q.2. Seema visited a Natural Gas Compressing Unit and found that the gas can be liquefied under specific conditions of temperature and pressure. While sharing her experience with friends she got confused. Help her to identify the correct set of conditions.(a) Low temperature, low pressure(b) High temperature, low pressure(c) Low temperature, high pressure(d) High temperature, high pressureAns. (c)Gases can be compressed under low temperature and high pressure. Under these conditions the particles of gases come closer and liquefy.Q.3. The property to flow is unique to fluids. Which one of the following statements is correct?(a) Only gases behave like fluids.(b) Gases and solids behave like fluids.(c) Gases and liquids behave like fluids.(d) Only liquids are fluids.Ans. (c)Gases and liquids flow due to less intermolecular forces in the molecules. Gases and liquids take the shape of the container in which they are put.Q.4. During summer, water kept in an earthen pot becomes cool because of the phenomenon of(a) Diffusion(b) Transpiration(c) Osmosis(d) Evaporation.Ans. (d)
Earthen pot has small pores through which water keeps evaporating and evaporation causes cooling.Q.5. A few substances are arranged in the increasing order of ‘forces of attraction’ between their particles. Which one of the following represents a correct arrangement?(a) Water, air, wind(b) Air, sugar, oil(c) Oxygen, water, sugar(d) Salt, juice, airAns. (c)
Forces of attraction between the particles increase in the order of: Gases < Liquids < solids
Hence, the correct arrangement is oxygen, water, sugar.Q.6. On converting 25°C, 38°C and 66°C to Kelvin scale, the correct sequence of temperature will be(a) 298 K, 311 K and 339 K(b) 298 K, 300 K and 338 K(c) 273 K, 278 K and 543 K(d) 298 K, 310 K and 338 KAns. (a)K = 25°C + 273Hence 25°C = 273 + 25 = 298 K38°C = 273 + 38 = 311 K66°C = 273 + 66 = 339 KQ.7. Choose the correct statement of the following.(a) Conversion of solid into vapours without passing through the liquid state is called vapourisation.(b) Conversion of vapours into solid without passing through the liquid state is called sublimation.(c) Conversion of vapours into solid without passing through the liquid state is called freezing.(d) Conversion of solid into liquid is called sublimation.Ans. (b)
Conversion of vapours into solid without passing through the liquid state is called sublimation.Q.8. The boiling points of diethyl ether, acetone and n-butyl alcohol are 35°C, 56°C and 118°C respectively. Which one of the following correctly represents their boiling points in Kelvin scale?(a) 306 K, 329 K, 391 K(b) 308 K, 329 K, 392 K(c) 308 K, 329 K, 391 K(d) 329 K, 392 K, 308 KAns. (c)35°C = 273 + 35 = 308 K56°C = 273 + 56 = 329 K118°C = 273 + 118 = 391 KQ.9. Which condition out of the following will increase the evaporation of water?(a) Increase in temperature of water(b) Decrease in temperature of water(c) Less exposed surface area of water(d) Adding common salt to waterAns. (a)Rate of evaporation increases with increase in temperature of water.Q.10. In which of the following conditions, the distance between the molecules of hydrogen gas would increase?(i) Increasing pressure on hydrogen contained in a closed container.(ii) Some hydrogen gas leaking out of the container.(iii) Increasing the volume of the container of hydrogen gas.(iv) Adding more hydrogen gas to the container without increasing the volume of the container.(a) (i) and (iii)(b) (i) and (iv)(c) (ii) and (iii)(d) (ii) and (iv)Ans. (c)(ii) If some hydrogen gas is leaked from the container the remaining gas will occupy the whole space and the distance between the molecules will increase.(iii) If the volume of the container is increased, same number of molecules will occupy that space. Hence, the distance between the molecules will increase.

Q.11. A sample of water under study was found to boil at 102°C at normal temperature and pressure. Is the water pure? Will this water freeze at 0°C?Ans. Water is not pure as pure water boils at 100°C, it will not freeze at 0°C. It will freeze at a temperature below than 0°C.Q.12. A student heats a beaker containing ice and water. He measures the temperature of the content of the beaker as a function of time. Which of the following (figure) would correctly represent the result? Ans. Ice and water both are present at 0°C. The temperature will remain constant till the whole ice changes into water because ice will melt by taking latent heat of fusion. On further heating, the temperature of water will increase. So, the correct option is (d).Q.13. Match the physical quantities given in column A to their SI units given in column B:

(b) DiffusionReason: Microscopic viruses get diffused in air.

(c) OsmosisReason: Because of difference in concentration of water and solute. Water comes out of the earthworm body causing its cell to burst causing its death.

(d) OsmosisReason: Thick sugar syrup has more solutes in it than grapes. Hence water moves out of the grapes from higher concentration to lower concentration hence grapes swell.

(e) OsmosisReason: Salt helps to remove water from the cells and helps to preserve pickles. Pickling is intended to keep out oxygen. Pickling prevents oxidation of fruits and vegetables through the use of salt. Dry salt forms pickling brine(aqueous sodium chloride) and absorbs excess moisture from fruits and vegetables through the process of osmosis.

(f) DiffusionReason: Particles containing smell diffuse into air to spread it throughout the house

(g) DiffusionReason: When Aquatic animals breathe dissolved oxygen, oxygen diffuses directly into their blood without any membrane.Q.17. Water as ice has a cooling effect whereas water as steam may cause severe burns. Explain these observations.Ans. Water as ice has less energy and water molecules absorb energy from our body to give cooling effect whereas steam has high energy and transfers high energy into our body which transforms as heat to cause burns.Q.18. Alka was making tea in a kettle. Suddenly, she felt intense heat from the puff of steam gushing out of the spout of the kettle. She wondered whether the temperature of the steam was higher than that of the water boiling in the kettle.Ans. The temperature of steam was not higher than that of boiling water but it had more energy. Due to latent heat of vaporization, she felt intense heat.Q.19. A glass tumbler containing hot water is kept in the freezer compartment of a refrigerator (temperature < 0°C). If you could measure the temperature of the content of the tumbler, which of the following graphs would correctly represent the change in its temperature as a function of time? 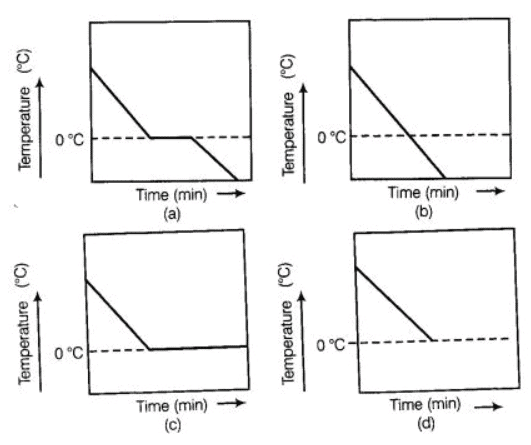 Ans. (a) is the correct graph.
The temperature of hot water decreases to 0°C and remains constant due to latent heat of fusion that is involved in formation of ice and then temperature decreases further.Q.20. Look at the figures and suggest in which of the vessels A, B, C or D the rate of evaporation will be the highest? Explain.

Ans. C is the correct figure. The rate of evaporation will be highest because it has a large open surface area and the wind of moving fan will also increase the rate of evaporation. Greater the surface area and more the wind speed, higher will be the rate of evaporation.Q.21. (a) Conversion of solid to vapour is called sublimation. Name the term used to denote the conversion of vapour to solid.(b) Conversion of solid-state to liquid state is called fusion. What is meant by latent heat of fusion?Ans. (a) It is also called sublimation.(b) The amount of heat energy released or absorbed when a solid changes to liquid at atmospheric pressure at its melting point is known as the latent heat of fusion.Q.22. Fill in the blanks:(a) Evaporation of a liquid at room temperature leads to a ______ effect.(b) At room temperature the forces of attraction between the particles of solid substances are ______ than those which exist in the gaseous state.(c) The arrangement of particles is less ordered in the ______ state. However, there is no order in the state.(d) ______ is the change of gaseous state directly to solid state without going through the ______ state.(e) The phenomenon of change of a liquid into the gaseous state at any temperature below its boiling point is called ______.Ans.(a) Cooling(b) Stronger(c) Liquid, gaseous(d) Sublimation, liquid(e) Evaporation

Q.24. It is a hot summer day. Priyanshi and Ali are wearing cotton and nylon clothes respectively. Who do you think would be more comfortable and why?Ans. Cotton is more comfortable because it can absorb water (sweat) more than nylon followed by evaporation which causes cooling. Secondly, cotton clothes have pores through which air can pass through. Therefore, Priyanshi is more comfortable.Q.25. You want to wear your favourite shirt to a party, but the problem is that it is still wet after a wash. What steps would you take to dry it faster?Ans. Conditions that can increase the rate of evaporation of water are:(i) Spread out the shirt so as to increase the surface area so that water can be evaporated faster.(ii) Increase the wind speed by switching on the fan.(iii) If wind speed is high outside and sunlight is present, dry it outside. It will dry faster due to higher temperature and higher wind speed. If sunlight is not available, use hot iron to dry it.Q.26. Comment on the following statements:(a) Evaporation produces cooling.(b) Rate of evaporation of an aqueous solution decreases with increase in humidity.Ans. (a) In evaporation, surface molecules take heat from surroundings and cause a cooling effect.(b) If humidity is high, then air already has lot of water vapours, it will not take more water vapours easily. Therefore, the rate of evaporation will be slow.Q.27. Why does the temperature of a substance remain constant during its melting point or boiling point?Ans. The temperature of a substance remains constant during melting and boiling points till the completion of melting and boiling because of latent heat of fusion used by the substances. Latent heat of fusion helps to overcome the force of attraction between particles of solid to change into liquid when they melt. Hence temperature remains constant. In the same way during formation of vapours latent heat helps solid substance to convert into gaseous state. Hence temperature of a substance remain constant at boiling point.