The document NCERT Exemplar: Principles of Inheritance & Variation - 2 Notes | Study Biology Class 12 - NEET is a part of the NEET Course Biology Class 12.
All you need of NEET at this link: NEET

Q1. In a Mendelian monohybrid cross, the F2 generation shows identical genotypic and phenotypic ratios. What does it tell us about the nature of alleles involved? Justify your answer.Ans: In a monohybrid cross, starting with parents which homozygous dominant and homozygous recessive, F1, would be heterozygous for the trait and would express the dominant allele. But in the case of incomplete dominance, a monohybrid cross shows the result as follows. 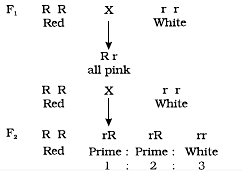 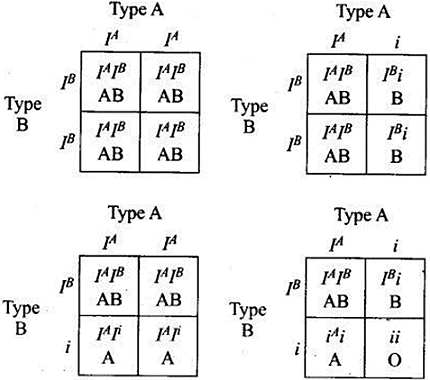 Q3. What is Down’s syndrome? Give its symptoms and cause. Why is it that the chances of having a child with Down’s syndrome increases if the age of the mother exceeds forty years?Ans: Down’s syndrome is a human genetic disorder caused due to trisomy of chromosome no. 21. Such individuals are aneuploid and have 47 chromosomes (2n + 1). The symptoms include mental retardation, growth abnormalities, constantly open mouth, dwarfness etc. The reason for the disorder is the non-disjunction (failure to separate) of the homologous chromosome of pair 21 during meiotic division in the ovum. The chances of having a child with Down’s syndrome increase with the age of the mother (+40) because ova are present in females. Since their birth and therefore older cells are more prone to chromosomal non-disjunction because of various physico-chemical exposures during the mother’s lifetime.Q4. How was it concluded that genes are located on chromosomes?Ans: Morgan confirmed Mendelian laws of inheritance and the hypothesis that genes are located on chromosomes. Morgan had discovered that eye colour in Drosophila expressed a sex-linked trait. All first-generation offspring of a mutant white-eyed male and a normal red-eyed female would have red eyes because every chromosome pair would contain at least one copy of the X chromosome with the dominant trait.Q5. A plant with red flowers was crossed with another plant with yellow flowers. If F1 showed all flowers orange in colour, explain the inheritance.Ans: This is due to the incomplete dominance as the F, do not resemble either of the two parents and is in between the two. 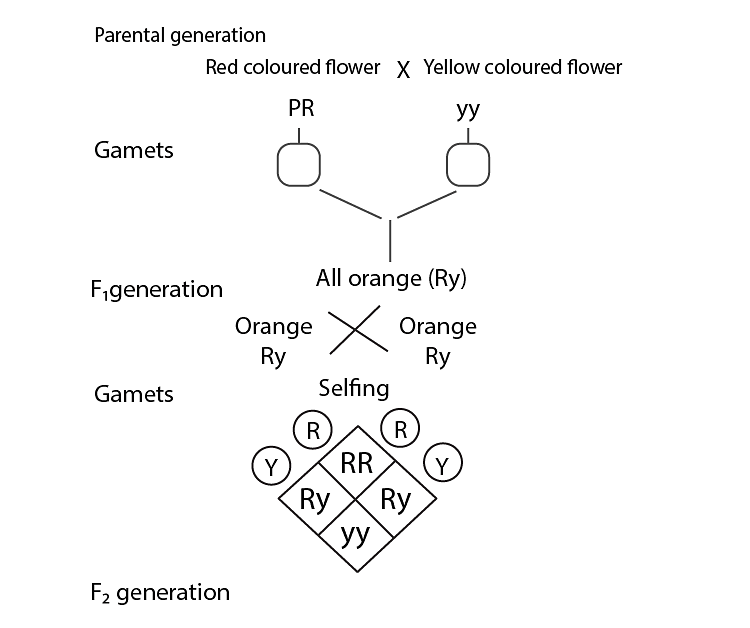 Q6. What are the characteristic features of a true-breeding line?Ans: A true-breeding line for a trait is one that, has undergone continuous self¬pollination or brother-sister mating, showing stability in the inheritance of the trait for several generations.Q7. In peas, tallness is dominant over dwarfness, and the red colour of flowers is dominant over the white colour. When a tall plant bearing red flowers was pollinated with a dwarf plant bearing white flowers, the different phenotypic groups were obtained in the progeny in numbers mentioned against them:Tall, Red = 138Tall, White = 132Dwarf, Red = 136Dwarf, White = 128Mention the genotypes of the two parents and of the four offspring types.Ans: The result shows that the four types of offspring are in a ratio of 1:1:1:1. Such a result is observed in a test-cross progeny of a dihybrid cross.The cross can be represented as:Tall & Red (Tt Rr) x Dwarf & White (ttrr)

Q8. Why is the frequency of red-green colour blindness is many times higher in males than that in females?Ans: For becoming colourblind, the female must have the allele for it in both her X-chromosomes; but males develop colourblindness when their sole X-chromosome has the allele for it.Q9. If a father and son are both defective in red-green colour vision, is it likely that the son inherited the trait from his father? Comment.Ans: Gene for colour blindness is X-chromosome linked, and sons receive their sole from their mother, not from their father. Male-to-male inheritances are not possible for X-linked traits in humans. In the given case the mother of the child must be a carrier (heterozygous) for the colour blindness gene.Q10. Discuss why Drosophila has been used extensively for genetical studies.Ans: Morgan worked with the tiny fruit flies, Drosophila melanogaster, which were found very suitable for such studies, as:

Q11. How do genes and chromosomes share similarity from the point of view of genetical studies?Ans: Similarities between Chromosomes and Genes:

Q12. What is recombination? Discuss the applications of recombination from the point of view of genetic engineering.Ans: The formation of new combinations of genes, either by crossing over or independent assortment is called recombination. Alfred Sturtevant used the frequency of recombination between gene pairs on the same chromosome as a measure of the distance between genes and ‘mapped’ their position on the chromosome. Today genetic maps are extensively used as a starting point in the sequencing of whole genomes as was done in the case of the Human Genome Sequencing Project.Q13. What is artificial selection? Do you think it affects the process of natural selection? How?Ans:  A process in the breeding of organisms by which the scientist chooses to only those forms having certain desirable characteristics is called artificial selection.

Q14. With the help of an example differentiate between incomplete dominance and co-dominance.Ans:

Q1. In a plant, tallness is dominant over dwarfness and red flower is dominant over white. Starting with the parents work out a dihybrid cross. What is the standard dihybrid ratio? Do you think the values would deviate if the two genes in question are interacting with each other?Ans:

Yes, the ratio will deviate if the two genes are interacting with each other. In this condition, the genes do not independently assort with each other. So, the ratio will be changed from 9:3:3: 1.Q2. a. In humans, males are heterogametic and females are homogametic. Explain. Are there any examples where males are homogametic and females heterogametic?b. Also describe as to, who determines the sex of an unborn child? Mention whether the temperature has a role in sex determination.Ans:

(a) The term homogametic and heterogametic refer to the organism depending upon whether all the gametes contain one type of sex chromosome (Homo = same) or two different types of sex chromosomes (Hetero = different). Humans show XX/XY type of sex determination, i.e. Females contain two copies of the X chromosome and males contain one X and one Y chromosome. Therefore, ova produced by females contain the same sex chromosome, i.e. X. On the other hand, the sperms contain two different types of chromosomes, i. e. 50% of sperms have X and 50% have Y chromosomes open from half the autosomes (Meiosis). Therefore, the sperms are different with respect to the composition of the sex chromosome. In the case of humans, females are considered to be homogametic while males are heterogametic. Yes, there are examples where males are homogametic and females are heterogametic. In some birds, the mode of sex determination is denoted by ZZ (males) and ZW (females),(b) As a rule the heterogametic organism determines the sex of the unborn child. In the case of humans, since males are heterogametic it is the father and not the mother who decides the sex of the child. In some animals like crocodiles, lower temperatures favour the hatching of female offspring and higher temperatures lead to the hatching of male offspring. 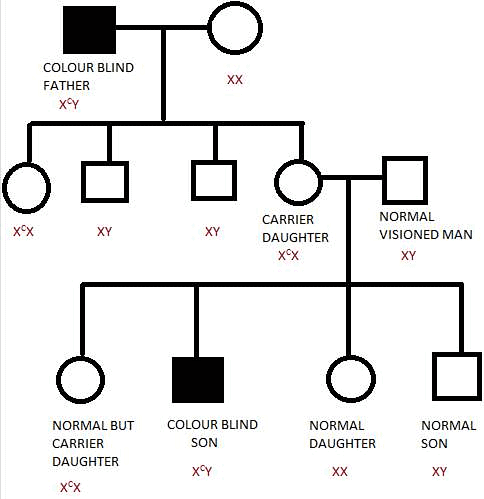 All daughters are normal visioned; 50% of sons are likely to be colour blind.Q4. Discuss in detail the contributions of Morgan and Sturvant in the area of genetics.Ans Experimental verification of the chromosomal theory of inheritance by Thomas Hunt Morgan (Father of experimental genetics) and his colleagues, led to discovering the basis for the variation that sexual reproduction produced. Morgan worked with the tiny fruit flies, Drosophila melanogaster, which were found very suitable for such studies.

(iii) Turner’s SyndromeSuch a disorder is caused due to the absence of one of the X chromosomes, i.e., 45 with XO. Such females are sterile as ovaries are rudimentary besides other features including lack of other secondary sexual characters.

The document NCERT Exemplar: Principles of Inheritance & Variation - 2 Notes | Study Biology Class 12 - NEET is a part of the NEET Course Biology Class 12.
All you need of NEET at this link: NEET