Q.9. From the statements given below choose the option that are true for a typical female gametophyte of a flowering plant:i. It is 8-nucleate and 7-celled at maturityii. It is free-nuclear during the developmentiii. It is situated inside the integument but outside the nucellusiv. It has an egg apparatus situated at the chalazal end(a) i and iv,(b) ii and iii(c) i and ii(d) ii and ivAns. (c)Solution.A typical female gametophyte of a flowering plant is 8-nucleate and 7-celled at maturity and free-nuclear during the development.Q.10. Autogamy can occur in a chasmogamous flower if:(a) Pollen matures before maturity of ovule(b) Ovules mature before maturity of pollen(c) Both pollen and ovules mature simultaneously(d) Both anther and stigma are of equal lengthsAns. (c)Solution.In a normal flower which opens and exposes the anthers and stigma complete autogamy is rather rare. Autogamy in such flowers requires synchrony in pollen release and stigma receptivity and also, the anthers and the stigma should lie close to each other so that self-pollination can occur.Q.11. Choose the correct statement from the following:(a) Cleistogamous flowers always exhibit autogamy(b) Chasmogamous flowers always exhibit geitonogamy(c) Cleistogamous flowers exhibit both autogamy and geitonogamy(d) Chasmogamous flowers never exhibit autogamyAns. (a)Solution.
Cleistogamous flowers are invariably autogamous as there is no chance of cross-pollen landing on the stigma. Cleistogamous flowers produce assured seed-set even in absence of pollinators.
Example of cleistogamous flowers are Viola (common pansy), Oxalis, Commelina, Arachis hypogea and Oryza sativa.Q.12. A particular species of plant produces light, non-sticky pollen in large numbers and its stigmas are long and feathery. These modifications facilitate pollination by:(a) Insects(b) Water(c) Wind(d) AnimalsAns. (c)Solution.Pollination by wind is called anemophily. Anemophilous flowers are small, in conspicuous non-scented without bright colours, nectar and fragrance. Wind pollination also requires that the pollen grains are light and non-sticky which is in large numbers and its stigmas are long and feathery.Q.13. From among the situations given below, choose the one that prevents both autogamy and geitonogamy.(a) Monoecious plant bearing unisexual flowers(b) Dioecious plant bearing only male or female flowers(c) Monoecious plant with bisexual flowers(d) Dioecious plant with bisexual flowersAns. (b)Solution.

Q.16. While planning for an artificial hybridization programme involving dioecious plants, which of the following steps would not be relevant:(a) Bagging of female flower(b) Dusting of pollen on stigma(c) Emasculation(d) Collection of pollenAns. (c)Solution.

Q.17. In the embryos of a typical dicot and a grass, true homologous structures are:
(a) Coleorhiza and coleoptile(b) Coleoptile and scutellum(c) Cotyledons and scutellum(d) Hypocotyl and radicleAns. (c)Solution.Cotyledons of the typical dicot embryo are simple structures generally thick and swollen due to storage of food reserves (as in legumes) and embryo of monocots consists of one large and shield shaped cotyledon known as scutellum situated towards one side (lateral) of the embryonal axis. E.g.: Grass family, Sorghum.Q.18. The phenomenon observed in some plants wherein parts of the sexual apparatus is used for forming embryos without fertilisation is called:(a) Parthenocarpy(b) Apomixis(c) Vegetative propagation(d) Sexual reproductionAns. (b)Solution.

Q.5. Indicate the stages where meiosis and mitosis occur (1, 2 or 3) in the flow chart.

Q.6. In the diagram given below, show the path of a pollen tube from the pollen on the stigma into the embryo sac. Name the components of egg apparatus. 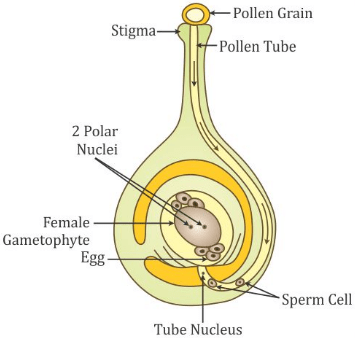 Q.9. Can an unfertilised, apomictic embryo sac give rise to a diploid embryo? If yes, then how?
Ans. Yes, if the embryo develops from the cells of nucellus or integument it will be diploid.

Q.10. Which are the three cells found in a pollen grain when it is shed at the three celled stage?
Ans. One vegetative cell and two male gametes Q.15. Are pollination and fertilisation necessary in apomixis? Give reasons.
Ans. No, they are not necessary. Apomixis is actually an alternative to sexual

reproduction although the female sexual apparatus is used in the process. In apomicts, embryos can develop directly from the nucellus or synergid or egg. Therefore, there is no need for either pollination or fertilisation.

Q.16. Identify the type of carpel with the help of diagrams given below: 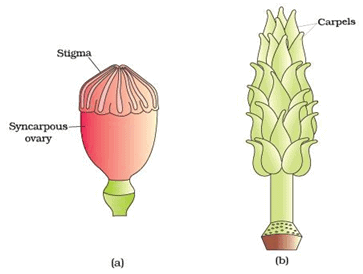 Q.17. How is pollination carried out in water plants?
Ans. Pollination by water is called hydrophily. Some examples of water pollinated plants are Vallisneria and Hydrilla (both are angiospermic hydrophytes) which grow in fresh water and several marine sea-grasses such as Zostera. Not all aquatic plants use water for pollination. In a majority of aquatic plants such as water hyacinth and water lily, the flowers emerge above the level of water and pollinated by insects or wind as in most of the land plants.

Q.18. What is the function of the two male gametes produced by each pollen grain in angiosperms.
Ans. After entering one of the synergids, the pollen tube releases the two male gametes into the cytoplasm of the synergid. One of the male gametes moves towards the egg cell or oosphere and fuses with its nucleus, thus completing the syngamy. This results in the formation of a diploid cell, the zygote. The other male gamete moves towards the two polar nuclei located in the central cell and fuses with them to produce a triploid primary endosperm nucleus (PEN).