The document NCERT Exemplar Solutions: Physical & Chemical Changes Notes | Study Science Class 7 - Class 7 is a part of the Class 7 Course Science Class 7.
All you need of Class 7 at this link: Class 7

Q.1. Which of the following is a physical change?(a) Rusting of iron(b) Combustion of magnesium ribbon(c) Burning of candle(d) Melting of waxAns: dExplanation:Rusting of iron, combustion and burning of the candle are chemical changes where produced cannot be converted into reactants.

Q.4. Which of the following is/are true when milk changes into curd?

Q.5. A man painted his main gate made up of iron, to

Q.6. Iron pillar near the Qutub Minar in Delhi is famous for the following facts. Which of these facts is responsible for its long stability?(a) It is more than 7 metres high.(b) It weighs about 6000 kg.(c) It was built more than 1600 years ago.(d) It has not rusted after such a long period.Ans: d

Q.1. State whether the following statements are true or false:(a) When a candle burns, both physical and chemical changes take place.(b) Anaerobic bacteria digest animal waste and produce biogas.(c) Ships suffer a lot of damage though they are painted.(d) Stretching of the rubber band is not a physical change.Ans:(a) True(b) True(c) True(d) False- Stretching of the rubber band is a physical change

Q.2. Melting of wax is a change where a solid changes to a liquid state. Give one more such change which you observe in your surroundings.Ans: Melting of ice is another example where solid turns to liquid.

Q.3. What kind of change is shown by tearing of paper?Ans: This is a physical change that cannot be reversed. 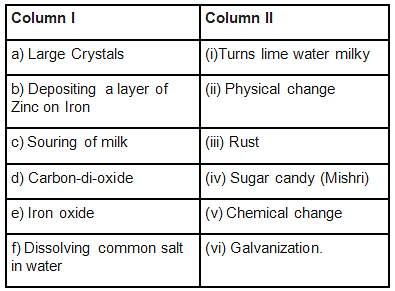 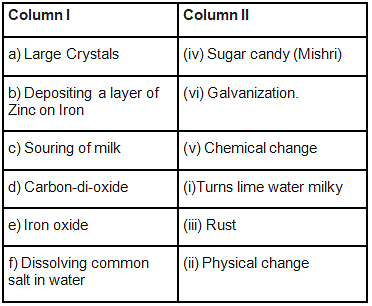 Q.2. Fill in the blanks in the following statements using the words given in the box.

Q.4. Write word equations for two chemical reactions with the help of materials given in the box.

Q.2. Give an example of a chemical reaction for each of the following situations:

Q.3. If you leave a piece of iron in the open for a few days, it acquires a film of brownish substance, called rust.(a) Do you think rust is different from iron?(b) Can you change rust back into iron by some simple method?(c) Do you think the formation of rust from iron is a chemical change?(d) Give two other examples of a similar type of changeAns:a) Rust is iron oxide and it’s different from ironb) Formation of rust is irreversible hence it cannot be reversed by any method.c) When iron reacts with water and atmospheric oxygen iron oxide is formed which is called rust. This is a chemical change as a new compound is formed.(d)

Q.4. A student took a solution of copper sulphate in a beaker and put a clean iron nail into it and left it for about an hour.(a) What changes do you expect?(b) Are these changes chemical in nature?(c) Write a word equation for the chemical change, if any.Ans:(a)

b) These changes are chemical changes as the new substances are formed in the form of iron sulphate and copper.

The document NCERT Exemplar Solutions: Physical & Chemical Changes Notes | Study Science Class 7 - Class 7 is a part of the Class 7 Course Science Class 7.
All you need of Class 7 at this link: Class 7