The document NCERT Exemplar Solutions: Respiration in Organisms Notes | Study Science Class 7 - Class 7 is a part of the Class 7 Course Science Class 7.
All you need of Class 7 at this link: Class 7

Q.4. Breathing is a process that(i) provides O2 to the body.(ii) breaks down food to release energy.(iii) helps the body to get rid of CO2.(iv) produces water in the cells.Which of the following gives the correct combination of functions of breathing?

Explanation:Breathing is a process oxygen-rich air is taken inside the body and carbon-di-oxide rich air is expelled from the body with the help of respiratory organs.

Q.5. Fish breathe with the help of gills which are richly supplied with blood vessels. The gills help the fish to(a) take in oxygen from the air.(b) take in oxygen dissolved in water.(c) absorb nutrients present in water.(d) release waste substances in water.Ans: bExplanation:Fishes use gills for the exchange of gases. As the water enters through mouth it flows through gills. Capillaries in the gills absorb oxygen dissolved in water and also help in expelling out CO2 from the body.

Q.1. Mark the following statements as True or False. Correct the false statements.(a) Oxygen breaks down glucose outside the cells of organisms.(b) Frogs can breathe through their skin as well as lungs.(c) Insects have spiracles on the lower surface of the body.(d) Exhaled air has more percentage of CO2 than inhaled air.Ans:a) False- Oxygen breaks down glucose inside the cells of organisms.b)Truec) False- Insects have spiracles on the sides of the body.d) True

Q.1. Pick the odd-one-out from each of the groups given below on the basis of respiratory organs. Give a reason for your answer.

a) Snail- Because snail does not breathe by trachea whereas cockroach, grasshopper and ants breathe by the trachea

b) Earthworm-because it breathes through its skin and it does not have lungs.

c) Fish- because fish don’t have lungs and they breathe by their gills.

d) Tadpoles- because tadpoles don’t have lungs and they breathe by their gills.

Q.3. On average, an adult human being at rest breathes 15–18 times per minute. The breathing rate, however, may differ under different conditions. Arrange the following activities given in the box in order of increasing breathing rates and give a reason for your answer.sleeping, cycling, brisk walk, watching T.V.

Ans:sleeping > watching T.V. > brisk walk > cyclingWhen a person performs a physical activity, breathing becomes faster. Because of which more oxygen is required by the cells to get more energy.

Q.3. On a very cold morning, Boojho and Paheli were talking with each other as they walked down to their school. They observed that the air coming out of their mouth looked like smoke. They were amused and wondered how it happened. Help them find the answer.

Ans: When the climate is cold warm and moist air exhaled by us condenses into mist when it comes in contact with the cold air of the atmosphere. This looks like smoke coming out of our mouth.

Q.4. Whenever we feel drowsy or sleepy, we start yawning. Does yawning help us in any way?Ans: When we feel the sleepy rate of respiration slows down. Because of this lungs will not get enough oxygen and we yawn. Yawning bring extra oxygen to the lungs and helps us in being awake.

Q.5. Insects and leaves of a plant have pores through which they exchange gases with the atmosphere. Can you write two points of differences between these pores with respect to their position, number and extension into the body?Ans:

Q.6. Paheli participated in a 400 m race competition held at her school and won the race. When she came home she had mixed feelings of joy and pain as she had cramps in her leg muscles. After a massage, she was relieved of the pain. Answer the following questions related to the situation. 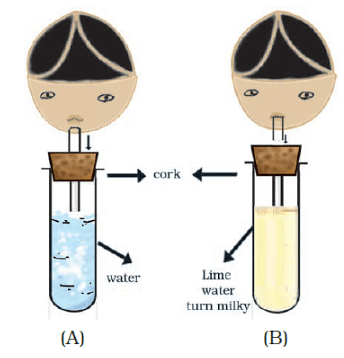 Q.9. A food stall owner was preparing dough for making bhaturas. He added a pinch of yeast and sugar to the dough and left it in a warm place. After few hours, the dough had risen. There was a sour smell too.(a) Why did the dough rise?(b) Why did the dough smell sour?(c) Why was sugar added to the dough?(d) What would have happened if the dough was kept in the refrigerator, soon after it was prepared?Ans:a) CO2 produced by yeast during respiration makes the dough riseb) During anaerobic respiration yeast produces alcohol. This gives sour smell to the dough.c) Sugar acts as food for yeastd) If kept in the refrigerator, yeast will not respire and multiply and the dough will not rise and will not produce a sour smell.

Q.10. Observe the figures given in Figure (A) and (B) and answer the following. 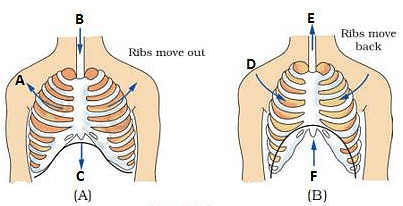 Ans:a) Fig. (A) indicates inhalation, and Fig. (B) indicates exhalation. 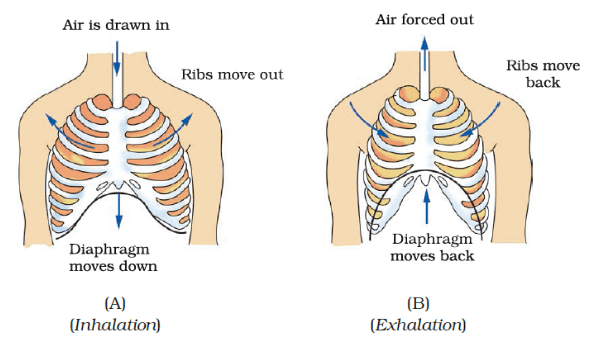 Q.11. Match the names of organisms in Column I with their organs of breathing given in Column II. 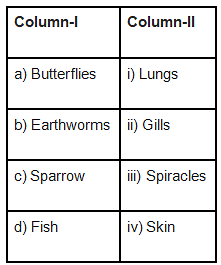 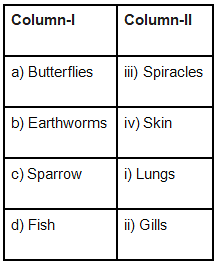 The document NCERT Exemplar Solutions: Respiration in Organisms Notes | Study Science Class 7 - Class 7 is a part of the Class 7 Course Science Class 7.
All you need of Class 7 at this link: Class 7