The document NCERT Exemplar Solutions: Triangles Notes | EduRev is a part of the Class 10 Course Mathematics (Maths) Class 10.
All you need of Class 10 at this link: Class 10

Q.2. If the lengths of the diagonals of rhombus are 16 cm and 12 cm. Then, the length of the sides of the rhombus is

(d) 20 cmAns: bExplanation:We know that,A rhombus is a simple quadrilateral whose four sides are of same length and diagonals are perpendicular bisector of each other.

According to the question, we get, Q.3. If ΔABC ~ ΔEDF and ΔABC is not similar to ΔDEF, then which of the following is not true?

Ans: cExplanation:We know that,If sides of one triangle are proportional to the side of the other triangle, and the corresponding angles are also equal, then the triangles are similar by SSS similarity. From ∆ABC and ∆PQR, we have,AB/QR = BC/PR = CA/PQIf sides of one triangle are proportional to the side of the other triangle, and their corresponding angles are also equal, then both the triangles are similar by SSS similarity.Therefore, we have,Δ PQR~Δ CAB

Q.1. Is the triangle with sides 25 cm, 5 cm and 24 cm a right triangle? Give reason for your answer.Ans: FalseExplanation:According to the question,Let us assume that,A = 25 cm

Ans: TrueExplanation: According to the question, Q.6. Is the following statement true? Why?“Two quadrilaterals are similar, if their corresponding angles are equal”.

Explanation:Two quadrilaterals cannot be similar, if only their corresponding angles are equal. Q.2. Find the value of x for which DE||AB in given figure. 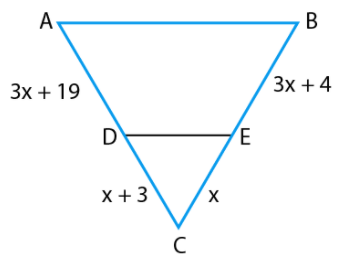 Ans:According to the question,DE || ABUsing basic proportionality theorem,CD/AD = CE/BE∴ If a line is drawn parallel to one side of a triangle such that it intersects the other sides at distinct points, then, the other two sides are divided in the same ratio.Hence, we can conclude that, the line drawn is equal to the third side of the triangle. 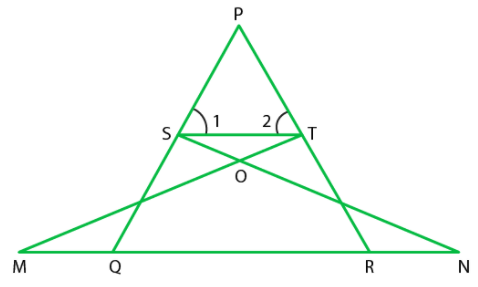 Q.4. Diagonals of a trapezium PQRS intersect each other at the point 0, PQ || RS and PQ = 3 RS. Find the ratio of the areas of Δ POQ and Δ ROS.Ans: 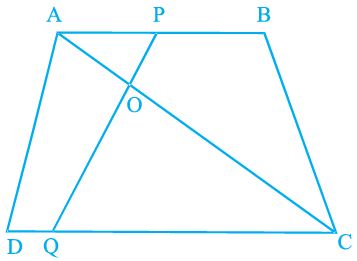 Thus, the perimeter of the triangle is 18 cm. Q.3. Prove that if a line is drawn parallel to one side of a triangle to intersect the other two sides, then the two sides are divided in the same ratio.Ans:Let a ∆ABC in which a line DE parallel to BC intersects AB at D and AC at E.

To prove DE divides the two sides in the same ratio.AD/DB = AE/EC Q.4. In the given Figure, if PQRS is a parallelogram and AB||PS, then prove that OC||SR. [PS ≅ QR Since, PQRS is a parallelogram,]From Equation (i) and (ii), Q.5. A 5 m long ladder is placed leaning towards a vertical wall such that it reaches the wall at a point 4 m high. If the foot of the ladder is moved 1.6 m towards the wall, then find the distance by which the top of the ladder would slide upwards on the wall.Ans:

Let the height of the wall on which ladder is placed = BC = 4m. Q.6. For going to a city B from city A, there is a route via city C such that AC⊥CB, AC = 2 x km and CB = 2 (x + 7) km. It is proposed to construct a 26 km highway which directly connects the two cities A and B. Find how much distance will be saved in reaching city B from city A after the construction of the highway.