Page No. 128Ques 1: Give reasons for the following:(a) Woodblock print only came to Europe after 1295.Ans. (i) Silk and spices from China reached Europe through the silk route.(ii) In the eleventh century, Chinese paper reached Europe through the same route.(iii) From ad 594 onwards, books in China were printed by rubbing paper - also invented there - against the inked surface of woodblocks.(iv) Marco Polo, a great explorer, had gone to China for exploration.(v) In 1295 he returned to Italy and brought this knowledge with him.(vi) From Italy, this technology spread to other parts of Europe.(vii) By the early fifteenth century, woodblocks were being widely used in Europe to print textiles, playing cards and religious pictures with simple brief texts.(b) Martin Luther was in favour of print and spoke out in praise of it.Ans. (i) In 1517 Martin Luther wrote Ninety Five Theses criticising many of the practices and rituals of the Roman Catholic Church.(ii) Luther’s writings were immediately reproduced in vast numbers and read widely.(iii) This led to the beginning of the Protestant Reformation.(iv) Luther’s translation of the New Testament sold 5,000 copies within a few weeks. All this became possible due to printing technology.(v) Deeply grateful to print, Luther said, ‘Printing is the ultimate gift of God and the greatest one.’(vi) Several scholars think that print brought about a new intellectual atmosphere and helped spread the new ideas that led to the Reformation. 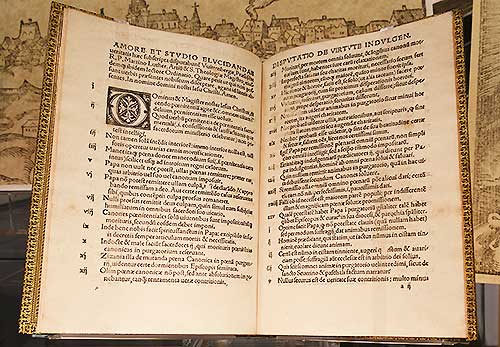 (c) The Roman Catholic Church began keeping an Index of Prohibited Books from the mid-sixteenth century.Ans. (i) The print and popular religious literature encouraged many distinctive individual interpretations of faith even among little-educated working people.(ii) Manocchio, a miller in Italy, after reading some books available in his locality, reinterpreted the message of the Bible and formulated a view of God and Creation that enraged the Roman Catholic Church.(iii) Various types of questions were raised against the faith and the Church.(iv) Manocchio was hauled up twice and ultimately executed.(v) As the Roman Catholic Church was troubled by such writings, it imposed severe controls over publishers and began to maintain an Index of Prohibited Books from 1558.(d) Gandhi said the fight for Swaraj is a fight for the liberty of speech, liberty of the press, and freedom of association.Ans: (i) Gandhi made the statement during the Non-Cooperation Movement.(ii) He considered these freedoms as powerful vehicles of forming and expressing public opinion.(iii) He was of the opinion that these freedoms were pre-requisites for attaining swaraj which meant self-rule.(iv) Gandhi criticised the British government to crush these freedoms by passing acts - Vernacular Press Act in 1878, which were a sign of oppressive policy. The denial of these freedoms was not compatible with the idea of self-rule and independence.Ques 2: Write short notes to show what you know about:(a) The Gutenberg Press(b) Erasmus’s idea of the printed book(c) The Vernacular Press ActAns: (a) The Gutenberg Press: (i) It was invented by Gutenberg by adapting existing technology to design his innovation.(ii) He used the olive press as a model for the printing press and moulds were used for casting the metal types for the letters of the alphabet.(iii) By 1448, he perfected his system. Gutenberg developed metal types for each of the 26 characters of the Roman alphabet.(iv) He devised a way of moving them around so as to compose different words of the text. This came to be known as the moveable type printing machine.(v) It remained the basic print technology over the next 300 years.(vi) The Gutenberg press could print 250 sheets on one side per hour.

(b) Erasmus’s idea of the printed book: (i) Erasmus was a Latin scholar and a Catholic reformer.(ii) He expressed deep anxiety about printing.(iii) He wrote in Adages (1508) that most of the printed books were hurtful to scholarship.(iv) He was afraid that printing would lead to the circulation of books with rebellious ideas.(v) He felt that although a few books can give useful information, the majority of books may be useless or give scandalous and irreligious ideas. Their number is so large that even valuable books lose their value.(c) The Vernacular Press Act: (i) Causes: After the revolt of 1857, the vernacular newspapers became assertively nationalist. This enraged the Englishmen and there was a demand to put restrictions on the vernacular press.(ii) In 1878, the Vernacular Press Act was passed.(1) It was modelled on the Irish Press Laws.(2) It provided the government with extensive rights to censor reports and editorials in the vernacular press.(3) This Act was against the freedom of press and the vernacular press was kept under stringent control.(4) For example, when a newspaper report was judged as seditious, the newspaper was warned. If the warning was ignored, the press was liable to be seized and the printing machinery confiscated.

Ques 3: What did the spread of print culture in nineteenth-century India mean to:(a) Women(b) The poor(c) ReformersAns: (a) Women:-(i) Lives and feelings of women began to be written in clear and intense ways. Issues like women’s education, widowhood, widow remarriage began to be highlighted.(ii) Women’s reading increased enormously in middle-class homes.(iii) Liberal husbands and fathers started educating women at home. When women’s schools were opened after the mid-nineteenth century, they sent them to schools for education.(iv) Articles were written in journals about the need for education for women. Sometimes syllabus and suitable reading material were published which could be used for home-based schooling.(v) Some women wrote books and autobiographies. Rashsundari Debi wrote her autobiography. Kailashbashini Debi wrote books highlighting the experiences of women and how they were treated unjustly In the 1880s, in present-day Maharashtra, Tarabai Shinde and Pandita Ramabai wrote about the miserable lives of upper-caste Hindu women, especially widows.(vi) In Hindi too, a large segment of it was devoted to the education of women. (b) The poor:-(i) Very cheap small books were brought to the markets in nineteenth-century Madras towns and sold at cross-roads, allowing poor people travelling to markets to buy them.(ii) Public libraries were set up from the early twentieth century, expanding the access to books. These libraries were located mostly in cities and towns, and at times in prosperous villages. For rich local patrons, setting up a library was a way of acquiring prestige.(iii) From the late nineteenth-century, cases of caste discrimination were published. For example, Jyotiba Phule wrote about the injustices of the caste system in his Gulamgiri (1871).(iv) Social reformers tried to restrict excessive drinking among them to bring literacy and sometimes, to propagate the message of nationalism.(v) Workers in factories like Kashibaba wrote Chhote Aur Bade Ka Sawal. Similarly, the poems of another mill worker were published in a collection called Sacchi Kavitayan.(c) Reformers: (i) The coming of print culture meant that the reformers could now spread their ideas more quickly among the masses.(ii) The debates on existing practices were printed in newspapers and journals.(iii) A large number of people could now participate in debates relating to religious and social reforms.(iv) New ideas emerged through these debates about widow immolation, monotheism, Brahmanical priesthood and idolatry.(v) Different ideas were printed in the everyday spoken language of ordinary people. For example, Raja Rammohun Roy published the Sambad Kaumudi to spread his ideas to reach the masses.(vi) Social reformers used the print culture to restrict excessive drinking among workers to spread literacy.(vii) Jyotiba Phule wrote about the injustices of the caste system in his book Gulamgiri.Ques 4: Why did some people in eighteenth-century Europe think that print culture would bring enlightenment and end despotism?Ans: (i) People in Europe during the 18th century thought that print culture would bring enlightenment and would led to end of despotism.(ii) Print culture led to easily and cheaply available literature and therefore could not be restricted to the upper classes.(iii) This caused fear among the clergy and the monarch as they felt that it would mark an end to the blind devotion to the ruler.(iv) Rousseau and Voltaire’s ideas of freedom, equality and brotherhood were reaching the common people and this created a new culture of dialogue and debate among the working class.Ques 5: Why did some people fear the effect of easily available printed books? Choose one example from Europe and one from India.Ans:  Their main cause of fear due to the easy availability of printed books was because the common people would challenge the higher authorities. Another reason could be the spread of rebellions and irregular ideas and thoughts.1. The Roman Catholic Church in Europe tried to restrict the printed books through the Index of Prohibited Books.2. Whereas, in India, the Vernacular was imposed on people, which mainly restricted the Indian presses and local newspaper to write against their colonisers.Ques 6: What were the effects of the spread of print culture for poor people in nineteenth-century India?Ans:  In India, the poor people benefitted from the print culture, due to the availability of low-price books and public libraries.1. Enlightening essays were written against caste discrimination and injustices. These were read by the common people across the country.2. Because of the support and encouragement of the social reformer, over-worked factory workers set up libraries for self-education, and some also published their own works like Kashibaba and Chhote Aur Bade Sawal,Ques 7: Explain how print culture assisted the growth of nationalism in India.Ans: 1. It assisted by providing easy access to nationalist ideals and ideas of quality and freedom.2. It became easier for the social reformers to spread their opinions through newspapers, which sparked off public debates.3. The common people began questioning the authority due to the power of reasoning.4. The nationalist newspaper reported on colonial misrule and encouraged people to participate in nationalist activities.