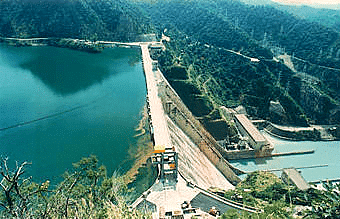 (a) Multiplying urban centres with large and dense populations and urban lifestyles have caused over-exploitation of water resources.(b) Regulating and damming of rivers affect their natural flow causing poor sediment flow and excessive sedimentation at the bottom of the reservoir.(c) In Gujarat, the Sabarmati basin farmers were agitated and almost caused a riot over higher priority given to water supply in urban areas, particularly during droughts.(d) Today in Western Rajasthan, sadly the practice of rooftop rainwater harvesting is on the decline as plenty of water is available due to the perennial Indira Gandhi Canal.Q2. Answer the following questions in about 30 words.(i) Explain how water becomes a renewable resource.(ii) What is water scarcity and what are its main causes?(iii) Compare the advantages and disadvantages of multi-purpose river projects.Ans:

(ii) In many parts of rural and urban India, rooftop rainwater harvesting is being successfully adapted to store and conserve water.