The document NCERT Solution - Motion & Time Class 7 Notes | EduRev is a part of the UPSC Course NCERT Hindi Textbooks (Class 6 to Class 12).
All you need of UPSC at this link: UPSC

Question: 1. Classify the following as motion along a straight line, circular or oscillatory motion:

(i) Motion of your hands while running.

(ii) Motion of a horse pulling a cart on a straight road.

(iii) Motion of a child in a merry-go-round.

(v) Motion of the hammer of an electric bell.

(vi) Motion of a train on a straight bridge.

(i) Periodic motion or Oscillatory motion

Question: 2. Which of the following are not correct?

(i) The basic unit of time is second.

(ii) Every object moves with a constant speed.

(iii) Distances between two cities are measured in kilometres.

(iv) The time period of a given pendulum is not constant.

(v) The speed of a train is expressed in m/h.

Question: 3. A simple pendulum takes 32 s to complete 20 oscillations. What is the time period of the pendulum?

Given, Number of oscillation = 20

Question: 4. The distance between two stations is 240 km. A train takes 4 hours to cover this distance. Calculate the speed of the train.

Question: 6. Salma takes 15 minutes from her house to reach her school on a bicycle. If the bicycle has a speed of 2 m/s, calculate the distance between her house and the school.

Question: 7. Show the shape of the distance-time graph for the motion in the following cases:

(i) A car moving with a constant speed. Question: 8. Which of the following relations is correct? 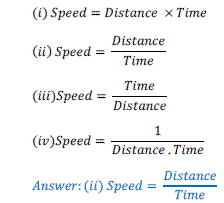 Question: 9. The basic unit of speed is:

Question: 11. Suppose the two photographs, shown in Fig. 13.1 and Fig. 13.2 had been taken at an interval of 10 seconds. If a distance of 100 metres is shown by 1 cm in these photographs, calculate the speed of the blue car.

Figure in question is given from text book.

Do the following steps to calculate the speed:

Divide th distance in meter by 10 second (time given in question).

Result will be the speed of car in meter/second.

Suppose the distance of car is 3.5 cm.

Question: 12. Figure given here shows the distance-time graph for the motion of two vehicles A and B. Which one of them is moving faster? 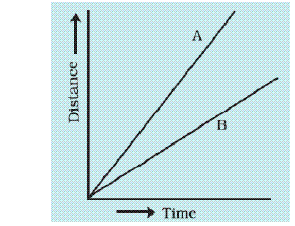 Answer: Vehicle A is moving faster which is evident from higher slope for distance time graph of this vehicle; compared to that of the other vehicle.

Question: 13. Which of the following distance-time graphs shows a truck moving with speed which is not constant?

Answer: (iii) The slope of the graph in this option is not a straight line and hence it does not show a uniform motion.