7. Examine how and why rulers tried to establish connections with the traditions of the Nayanars and the sufis.

Ans. Nayanars were the worshippers of Lord Shiva. It gained a shape of powerful Bhakti movement in South India in 6th Century onwards. Apart from being popular with the people, the movement got support and patronage of the rulers of the time. This is manifested by the following facts:1. A major part of South India was ruled by Chola Kings during the period 9th to 13th Century. They gave great patronage to the Bhakti movement saints including Nayanars. Thus, they did by making grants of land and constructing temples of Shiva and Vishnu for the saints of Bhakti movement.2. The most beautiful temples of Shiva of South India, namely, at Chidambaram, Tanjavur and Gangaikondacholpuram were constructed under the patronage of Chola rulers.3. During the same period some of the most spectacular representation of Shiva in bronze sculpture were produced. All this was possible because the rulers patronised the Nayanars.4. Nayanars had considerable following among farmers.The rulers tried to establish connections with the Nayanars and this is explained by the aforesaid description. The reason why they did is not far to seek. One reason could be to bring sanctity to the their rule. By giving alms to the temple and the preachers of Nayanar sect the rulers also announced their wealth and might. Next such acts might have endeared the rulers to the masses.Sufi Tradition and the rulers of Delhi Sultnate and Mughals:In the 12th Century, Delhi and a considerable part of India fell to the rule of Muslim rulers. This rule is known as the period of Delhi Sultanate. The rulers of Delhi Sultanate claimed themselves under Khalifate of Kabul and tried to legitimize their rule. The next step could have been establishing the rule of Shari‘a laws. However, the rulers realised for the very beginning that it was impractical. Under the Delhi Sultanate most of the people were not Muslim. Shari’a laws were not feasible also because lacked flexibity which a ruler needed to govern. The rulers of Delhi Sultanate wanted to take a practical path of governance without renouncing Islam. Sufi tradition gave them this opportunity. The same idea prevailed during the rule of the great Mughals too. Hence the rulers of Delhi Sultanate and the Mughal empire adopted the tradition of sufism.

8. Analyses, illustrations, why bhakti and sufi thinkers adopted a variety of languages in which to express their opinions.

Ans. In medieval India, though Sanskrit and Persian may be the language of the educated people or at the court, the vast number of people living in villages conversed in the local languages. It was, therefore, needed that the Bhakti and Sufi saints preached in the languages of the common people. This was in fact essential in order to make these movement truly popular.This is manifested in the following examples:1. The traditional Bhakti saints composed the hymns in Sanskrit. Such hymns were sung on special occasions often within temples.2. The Nayanars and the Alvars were wandering saints. They travelled far andwide, often walking on foot. They met people in different villages. These saints would sing the verses in praise of God all in the language of the local people only. The language was Tamil only. These travelling saints established temples where prayers took place in Tamil and the devotional songs were composed by the Bhakti Saints.3. In North India the language was different. Here too the saints took to the language of the common people. Guru Nanak created Shabad all in Punjabi. Baba Farid and Swami Raidas (Ravidas) all composed in Punjabi and Hindustani.4. Kabirdas who lived in Benaras, wrote in local language which was closer to Hindustani. He used words there part of local dialect.5. The Sufi tradition of singing on tombs carried on in the language of the local people only. The shrines were the place of Sama sung in Hindustani or Hindavi. Another Sufi Saint Baba Farid composed in Punjabi too that even became part of Guru Granth Sahib.6. Some other saints wrote in Kannada, Tamil and other languages too.Thus, we are inclined to agree with the view that the Saints of Bhakti and Sufi Movement composed in many languages and the languages of the common people to connect with them.

9. Read any five of the sources included in this chapter and discuss the social and religious ideas that are expressed in them.

Ans. The period of the Bhakti Movement and Sufi Movement also has many sources that contribute to the history of those days. Some of the major social and religious ideas expressed in the various sources of history are as follows:1. The first is the architecture. The different types of stupas, temple, monasteries all symbolise different types of religious belief system and practices. Some of them exist as it is and enable us to look into the annals of history of those days. Some of them are in the form of ruins but they also throw light on the, religion and society of those days alike.2. The next important source of history is the composition of the saints both Bhaktiand Sufi. In terms of content they are religious but they are not the divine textbooks of religion that are sacrosanct. The compilation throws light on the life of common men and village lifestyle. They also impact the music and art of those days.3. Another very important source of the history of those days is the biographies of the Saints. The biographies include the description of the society and prevalent beliefs and practices. It is notable that such biographies may not be in the written form still they can give insight into the life of those days. It is the story prevalent that I when Kabirdas died, both Hindus and Muslims fought for his dead body later on his body turned into flowers. Some were taken by Muslims and others by Hindus.This represents that there conflict and collaboration between both Hindus and Muslims of those days.4. This was also the period of rise of religious leaders who were intermediaries between common men and God. Earlier it was only the Brahmins who got this role. Now many people from other background also joined in. To some extent it acted as the the force that idolised equality and fraternity.5. The other source is the folklore. They are described in our art forms. It may be dance, paintings, and sculpture and so on. They all talk about the universal brotherhood of mankind and love for one and all.

10. On an outline map of India, plot three major sufi shrines and three places associated with temples (one each of a form of Vishnu, Shiva and the goddess.) 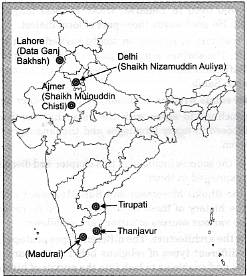 11. Choose any two of the religious teachers/thinkers/saints mentioned in this chapter, and find out more about their lives and teachings. Prepare a report about the area and the times in which they lived, their major ideas, how do we know about them, and why you think they are important?

Ans. Following are the two saints of the Bhakti movement who are described as follows:Guru Nanak:Guru Nanak, the founder of Sikhism and the first of the ten Gurus of the Sikhs, was born in the village of Talwandi on 15th April, 1469. The village now is known as Nankana Sahib. He belonged to a Khatri caste. Before Guru Nanak departed for his heavenly abode on 22nd Sept., 1539, his name had travelled not only throughout India’s north, south, east and west, but also far beyond into Arabia, Mesopotamia (Iraq), Ceylon (Sri Lanka), Afghanistan, Turkey, Burma and Tibet.His teachings included:Equality of humans: Guru Nanak preached against discrimination and prejudices due to race, caste, status, etc. He said: “See the brotherhood of all mankind as the highest order of Yogis; conquer your own mind, and conquer the world.”Universal message for all people: Normally preachers confined their preachings to the men of their own religion. But Nanak reached out. He spoke to hindus and muslims both and said to all “To take what rightfully belongs to another is like a muslim eating pork, or a hindu eating beef.”Equality of women: Nanak promoted women’s rights and equality—a first for the 15th century! He asked:“From woman, man is born; within woman, man is conceived; to woman he is engaged and married. Woman becomes his friend; through woman, the future generations come. When his woman dies, he seeks another woman; to woman he is bound. So should why we call her bad?NamdeoSaint Namdeo was born in the year 1270 in the village of Narasi-Bamani, now located in the Hingoli District in Maharashtra. He is a great Saint Poet of Maharashtra. He was one of the earliest writers who wrote in the Marathi language. He is the foremost proponent of the Bhagwad-Dharma who reached beyond Maharashtra, right into Punjab. He also wrote some hymns in Hindi and Punjabi, Namdev travelled through many parts of India, reciting his religious poems. In difficult times, he played the difficult role of uniting the pendle of Maharashtra spiritually, He is said to have lived for more than twenty years in the village of Ghuman in the Gurdaspur district of Punjab. The Sikh brethren in Punjab consider him one.