Q1. Why is Mrs Pumphrey worried about Tricki?Ans: Mrs Pumphrey was worried and upset about Tricki’s health as he was not eating anything. He refused to eat his favourite dishes and had bouts of vomiting. He spent all his time lying on a rug, panting and didn’t show any interest in going for daily walks too. 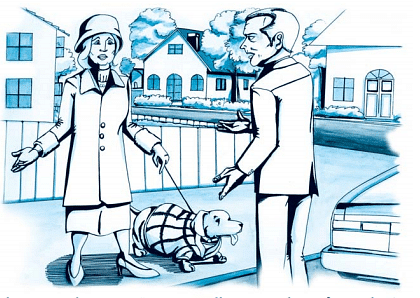 Q2. What does she do to help him? Is she wise in this?Ans: Initially, Mrs Pumphrey thought that Tricki had become listless(lacking energy or enthusiasm) as he seemed to have no energy. She assumed that he must be suffering from malnutrition(lack of proper nutrition), so she started giving him some little extras between meals to build him up, some malt and cod-liver oil and a bowl of Horlicks at night to make him sleep. She would also indulge him in cream cakes and chocolates unnecessarily(needlessly) and did not give him enough exercise. With all this pampering and indulgence, Tricki became hugely fat, like a bloated(excessive in size) sausage with a leg at each corner. It was absolutely not a wise decision on the part of his mistress to overfeed him that worsened his condition and made him more lazy and bulky(large). However, seeing his plight(dangerous or unfortunate situation) Mrs Pumphrey was distraught(worried and upset) and consulted a veterinary (relating to the treatment of animals) surgeon(medical practitioner qualified to practice surgery), Dr. Herriot to help improve Tricki’s health condition.Q3. Who does ‘I’ refer to in this story?Ans: In this story, ‘I’ refers to the veterinary (relating to the treatment of animals) surgeon (medical practitioner qualified to practice surgery), Mr Herriot.

All these instances point to the fact that Mrs Pumphrey lived a luxurious (extremely comfortable) life.

Q2. How does he (the doctor) treat the dog?Ans: The doctor treats the dog as follows: 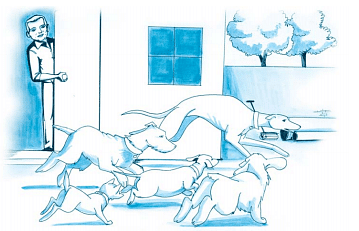 Q1. What kind of a person do you think the narrator, a veterinary surgeon, is? Would you say he is tactful as well as full of common sense?Ans: The narrator, a veterinary surgeon, was a very wise and tactful doctor. He handled Tricki properly with compassion as he understood that the dog was not suffering from any illness. From the dog’s lazy condition, he could make out that he had become bulky due to overfeeding by his mistress. Thus, he did not perform any surgery on him, rather cured him by altering his diet and engaging him in physical activities. Under the doctor’s supervision, Tricki recovered from his illness within a span of two weeks.Yes, Dr. Herriot was a tactful person as he could convince Mrs Pumphrey to hospitalise Tricki for a surgery. He knew exactly how to treat her pet effectively and make him a lively animal. Upon the dog’s recovery, he informed Mrs Pumphrey to come and collect Tricki even though he was tempted to keep her pet as a permanent guest for the luxurious inflow of expensive food items sent by his mistress from time to time.Q2. Do you think Tricki was happy to go home? What do you think will happen now?Ans:

Q3. Do you think this is a real-life episode or mere fiction? Or is it a mixture of both?Ans: This story could be a mixture of both: real-life episode and mere fiction (literature in the form of prose). Mrs Pumphrey is a rich lady and has a pet dog. It is because of her pampering (kindness and too much attention and care) that she overfeeds her dog which results in its illness. Although she has good intentions in her mind, excess of everything is bad. This episode can be treated as fiction who do not take it seriously. It can be called real life for those parents who take excessive (extreme) care of their child.

Q1. This episode describes the silly behaviour of a rich woman who is foolishly indulgent (kind and caring), Perhaps because she is lonely. Do you think such people are merely (simply) silly, or Can their actions cause harm to others?Ans: This episode describes the silly (irresponsible) behaviour of a rich woman who is foolish. This may be because of her loneliness (lack of friends). They are ignorant about the results of their actions. They show their excessive lone (distinct) and affection for someone without knowing the consequences (result). There is no doubt that their intentions (aim/purpose) are good, and don’t have any sort of ill-will (hatred), but they are not aware their action can cause harm to others.  Q2. Do you think there are also parents like Mrs. Pumphrey?Ans: Yes, there are parents who are too possessive (overprotective) about their kids. The sense of overindulgence (the action of having too much of something) can go in either way. There are examples of parents spoiling their child by meeting each and every demand of the child. There are also examples of strict parents who put unnecessary pressure on their child for study and particular behaviour patterns.

Q4. What would you have done if you were in the narrator’s place?Ans: If I were in the narrator’s place, I would have treated Tricki with a similar amount of compassion and love. I would have been equally caring as Mr James Herriot towards Tricki. I would have just been a little more stern(strict) while advising Mrs Pumphrey to put Tricki on a strict diet knowing her love for the pet. I would have also not consumed Tricki’s share of eggs, wine and brandy sent by Mrs Pumphrey and resisted the temptation of keeping Tricki as my permanent guest in my hospital.