The document NCERT Solutions: Biotechnology: Principles & Processes Notes | Study Biology Class 12 - NEET is a part of the NEET Course Biology Class 12.
All you need of NEET at this link: NEET

This technology involves the transfer of specific genes from an organism into another organism using vectors and restriction enzymes as molecular tools.

Ques 2: Make a chart (with diagrammatic representation) showing a restriction enzyme, the substrate DNA on which it acts, the site at which it cuts DNA and the product it produces.Ans: The name of the restriction enzyme is Bam H 1. 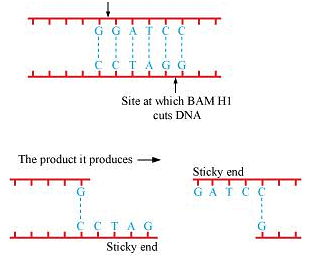 Ques 3: From what you have learnt, can you tell whether enzymes are bigger or DNA is bigger in molecular size? How did you know?Ans: Enzymes are smaller in size than DNA molecules. This is because DNA contains genetic information for the development and functioning of all living organisms. It contains instructions for the synthesis of proteins and DNA molecules. On the other hand, enzymes are proteins which are synthesized from a small stretch of DNA known as ‘genes’, which are involved in the production of the polypeptide chain.Ques 4: What would be the molar concentration of human DNA in a human cell? Consult your teacher.Ans: The molar concentration of human DNA in a human diploid cell is as follows:⇒ Total number of chromosomes × 6.023 × 1023⇒ 46 × 6.023 × 10­­­23⇒ 2.77 ×1018 MolesHence, the molar concentration of DNA in each diploid cell in humans is 2.77 × 10 23 moles.Ques 5: Do eukaryotic cells have restriction endonucleases? Justify your answer.Ans: No, eukaryotic cells do not have restriction endonucleases. This is because the DNA of eukaryotes is highly methylated by a modification enzyme, called methylase. Methylation protects the DNA from the activity of restriction enzymes .These enzymes are present in prokaryotic cells where they help prevent the invasion of DNA by virus. 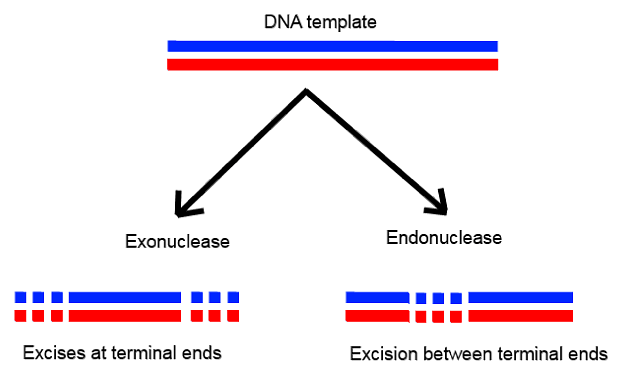 (1) Small volumes of culture can be taken out from the reactor for sampling or testing.(2) It has a foam breaker for regulating the foam.(3) It has a control system that regulates the temperature and pH. 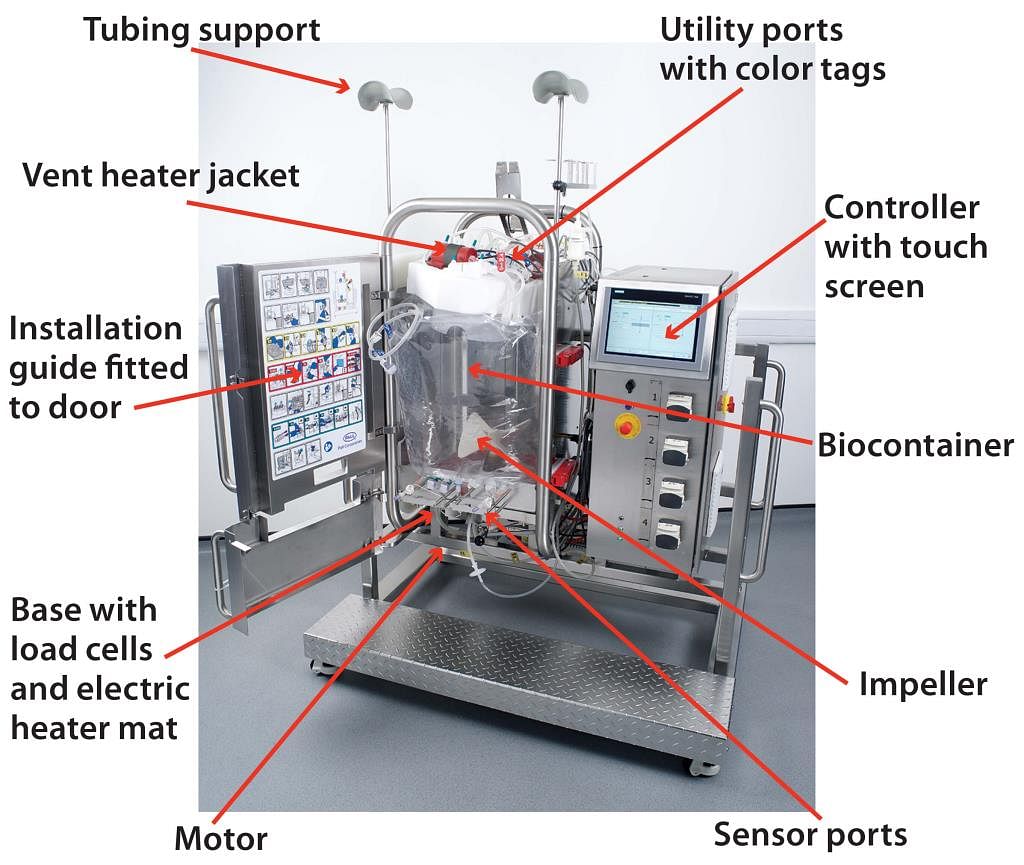 Five examples of palindromic sequences are: 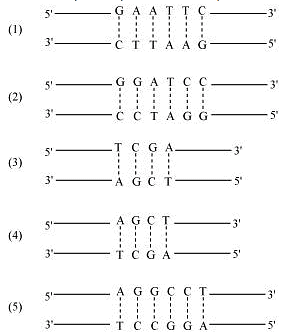 Ques 8: Can you recall meiosis and indicate at what stage a recombinant DNA is made?Ans: Meiosis is a process that involves the reduction in the amount of genetic material. It is two types, namely meiosis I and meiosis II. During the pachytene stage of prophase I, crossing over of chromosomes takes place where the exchange of segments between non-sister chromatids of homlogous chromosomes takes place. This results in the formation of recombinant DNA.Ques 9: Can you think and answer how a reporter enzyme can be used to monitor transformation of host cells by foreign DNA in addition to a selectable marker?Ans: A reporter gene can be used to monitor the transformation of host cells by foreign DNA. They act as a selectable marker to determine whether the host cell has taken up the foreign DNA or the foreign gene gets expressed in the cell. 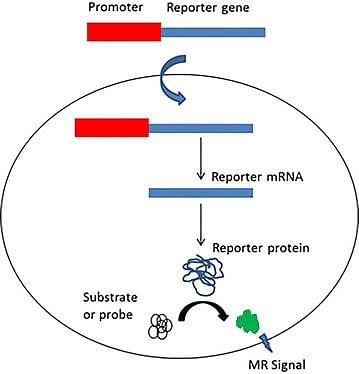 The researchers place the reporter gene and the foreign gene in the same DNA construct. Then, this combined DNA construct is inserted in the cell. 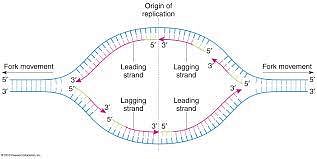 (c) Downstream processing− Downstream processing is a method of separation and purification of foreign gene products after the completion of the bio-synthetic stage. The product is subjected to various processes in order to separate and purify the product. After downstream processing, the product is formulated and is passed through various clinical trials for quality control and other tests.Ques 11: Explain briefly(a) PCR(b) Restriction enzymes and DNA(c) ChitinaseAns: (a) PCR: Polymerase chain reaction (PCR) is a technique in molecular biology to amplify a gene or a piece of DNA to obtain its several copies. It is extensively used in the process of gene manipulation. 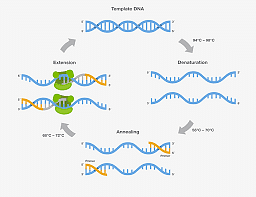 Then, this ssDNA molecule is used as a template strand for the synthesis of a new strand by the DNA polymerase enzyme and this process is called annealing, which results in the duplication of the original DNA molecule.

This process is repeated over several cycles to obtain multiple copies of the rDNA fragment. 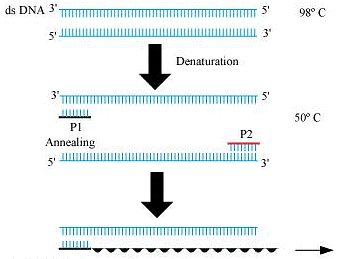 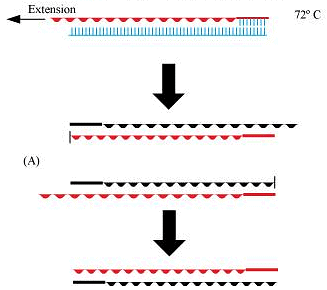 Restriction enzyme are categorized into two types−(i) Exonuclease− It is a type of restriction enzyme that removes the nucleotide from either 5’ or 3’ ends of the DNA molecule.(ii) Endonuclease− It is a type of restriction enzyme that makes a cut within the DNA at a specific site. This enzyme acts as an important tool in genetic engineering. It is commonly used to make a cut in the sequence to obtain DNA fragments with sticky ends, which are later joined by enzyme DNA ligase.(c) Chitinase− Chitinase is a class of enzymes used for the degradation of chitin, which forms a major component of the fungal cell wall. Therefore, to isolate the DNA enclosed within the cell membrane of the fungus, enzyme chitinase is used to break the cell for releasing its genetic material.Ques 12: Discuss with your teacher and find out how to distinguish between(a) Plasmid DNA and chromosomal DNA(b) RNA and DNA(c) Exonuclease and EndonucleaseAns: (a) Plasmid DNA and chromosomal DNA

The document NCERT Solutions: Biotechnology: Principles & Processes Notes | Study Biology Class 12 - NEET is a part of the NEET Course Biology Class 12.
All you need of NEET at this link: NEET