The document NCERT Solutions: Transport in Plants Notes | Study Biology Class 11 - NEET is a part of the NEET Course Biology Class 11.
All you need of NEET at this link: NEET

Q.1. What are the factors affecting the rate of diffusion? 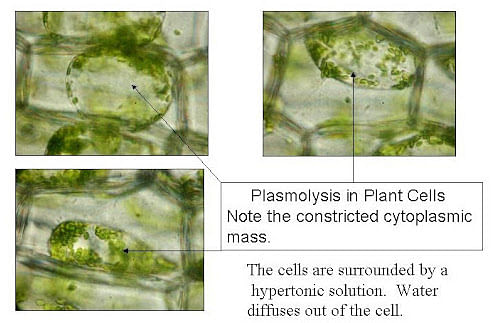 Diffusion takes place as long as there is a difference between the concentrations of a substance across a barrier. However, diffusion stops, when the concentrations of the substance on either side of the barrier become equal. The permeability of a membrane affects the rate of diffusion. Diffusion rate increases as membrane permeability increases. Changes in temperature and pressure values also affect the diffusion of substances. Pressure plays an important role in the diffusion of gases as gases diffuse from a region of higher partial pressure to a region of lower partial pressure.

Q.2. What are porins? What role do they play in diffusion?

Ans: Porins are types of proteins which form pores of large sizes in the outer membranes of plastids such as chloroplast, mitochondria and the membranes in bacteria. They help in facilitating the passive transport of small-sized protein molecules. 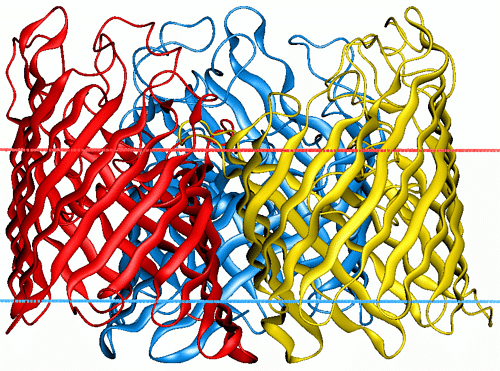 Q.3. Describe the role played by protein pumps during active transport in plants.

Ans: In plant cells, active transport occurs against the concentration gradient, i.e., from a region of lower concentration to a region of higher concentration. The process of active transport involves specific protein pumps. The protein pumps are made up of specific proteins called trans-membrane proteins. These pumps first make a complex with the substance to be transported across the membrane, using the energy derived from ATP. The substance finally gets liberated into the cytoplasm as a result of the dissociation of the protein–substance complex.

Q.4. Explain why pure water has the maximum water potential.

Ans: Water potential quantifies the tendency of water to move from one part to the other during various cellular processes. It is denoted by the Greek letter Psi or Ψ. The water potential of pure water is always taken as zero at standard temperature and pressure. It can be explained in terms of the kinetic energy possessed by water molecules. When water is in liquid form, the movement of its molecules is rapid and constant. Pure water has the highest concentration of water molecules. Therefore, it has the highest water potential. When some solute is dissolved in water, the water potential of pure water decreases.

Ans: (a) Diffusion and osmosis

(b) Transpiration and evaporation

(e) Apoplast and symplast pathways of movement of water in plants

Q.6. Briefly describe water potential. What are the factors affecting it? 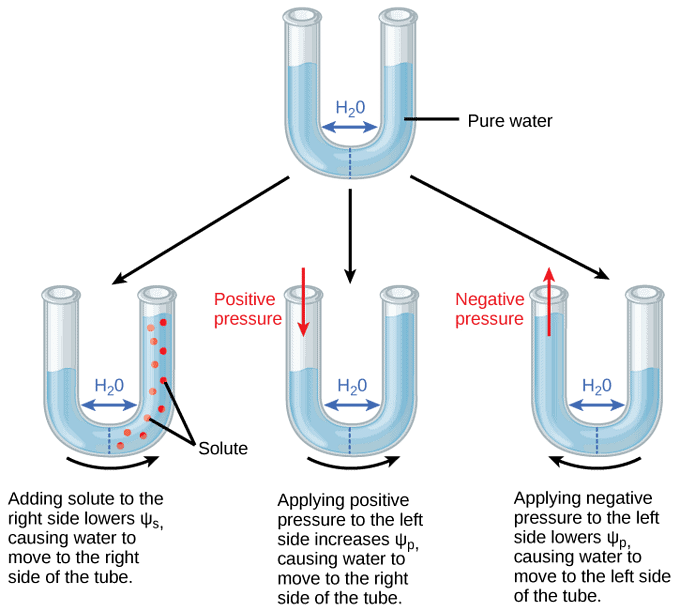 Q.7. What happens when a pressure greater than the atmospheric pressure is applied to pure water or a solution?

Ans: The water potential of pure water or a solution increases on the application of pressure values more than atmospheric pressure. For example: when water diffuses into a plant cell, it causes pressure to build up against the cell wall. This makes the cell wall turgid. This pressure is termed as pressure potential and has a positive value. 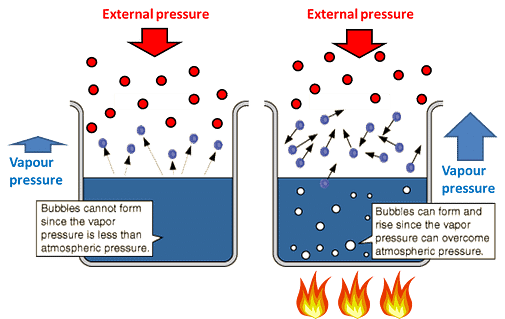 Q.8. (a) With the help of well-labelled diagrams, describe the process of plasmolysis inplants, giving appropriate examples.(b)Explain what will happen to a plant cell if it is kept in a solution having higherwater potential.

Ans: (a) Plasmolysis can be defined as the shrinkage of the cytoplasm of a plant cell, awayfrom its cell wall and toward the centre. It occurs because of the movement of water from the intracellular space to the outer-cellular space. This happens when the plant cell is placed in a hypertonic solution (i.e., a solution having more solute concentration than the cell cytoplasm). This causes the water to move out of the cell and toward the solution. The cytoplasm of the cell shrinks and the cell is said to be plasmolysed. This process can be observed in an onion peel kept in a highly concentrated salt solution.

(b) When a plant cell is placed in a hypertonic solution or a solution having higherwater potential, the water diffuses into the cell (i.e., movement is observed from higher to lower water pressure region). The entry of water in the plant cell exerts pressure on the rigid cell wall. This is called turgor pressure. As a result of its rigid cell wall, the plant cell does not burst.

Q.9. How is the mycorrhizal association helpful in absorption of water and minerals in plants?

Ans: Mycorrhiza is a symbiotic association of fungi with the root systems of some plants. The fungal hyphae either form a dense network around the young roots or they penetrate the cells of the roots. The large surface area of the fungal hyphae is helpful in increasing the absorption of water and minerals from the soil. In return, they get sugar and nitrogenous compounds from the host plants. The mycorrhizal association is obligate in some plants. For example, Pinus seeds do not germinate and establish in the absence of mycorrhizal.

Q.10. What role does root pressure play in water movement in plants?

Ans: Root pressure is the positive pressure that develops in the roots of plants by the active absorption of nutrients from the soil. When the nutrients are actively absorbed by root hairs, water (along with minerals) increases the pressure in the xylem. This pressure pushes the water up to small heights. Root pressure can be observed experimentally by cutting the stem of a well-watered plant on a humid day. When the stem is cut, the solution oozes from the cut end. 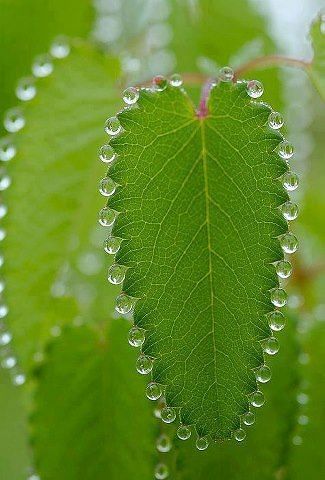 Root pressure is also linked to the phenomenon of guttation, i.e., the loss of water in the form of liquid droplets from the vein endings of certain herbaceous plants.

Root pressure is only able to transport water up to small heights. However, it helps in re-establishing the continuous chains of water molecules in the xylem.Transpirational pull maintains the flow of water molecules from the roots to the shoots.

Q.11. Describe transpiration pull model of water transport in plants. What are the factors influencing transpiration? How is it useful to plants?

Ans: (i) In tall trees, water rises with the help of the transpirational pull generated by transpiration or loss of water from the stomatal pores of leaves. This is called the cohesion-tension model of water transport.

(ii) During daytime, the water lost through transpiration (by the leaves to the surroundings) causes the guard cells and other epidermal cells to become flaccid. They in turn take water from the xylem. This creates a negative pressure or tension in the xylem vessels, from the surfaces of the leaves to the tips of the roots, through the stem. As a result, the water present in the xylem is pulled as a single column from the stem. The cohesion and adhesion forces of the water molecules and the cell walls of the xylem vessels prevent the water column from splitting.

Q.12. Discuss the factors responsible for ascent of xylem sap in plants.

Ans: Transpirational pull is responsible for the ascent of water in the xylem. 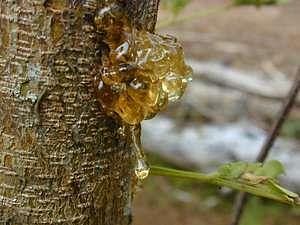 Q.13. What essential role does the root endodermis play during mineral absorption in plants?

Ans: In plants, nutrients are absorbed through the active and passive transports. The endodermal cells of the roots containing suberin allow only selected minerals to pass through them. The transport proteins present in the membranes of these cells act as check points for the various solutes reaching the xylem.

Ans: During the growth of a plant, its leaves act as the source of food as they carry out photosynthesis. The phloem conducts the food from the source to the sink (the part of the plant requiring or storing food). During spring, this process is reversed as the food stored in the sink is mobilised toward the growing buds of the plant, through the phloem. 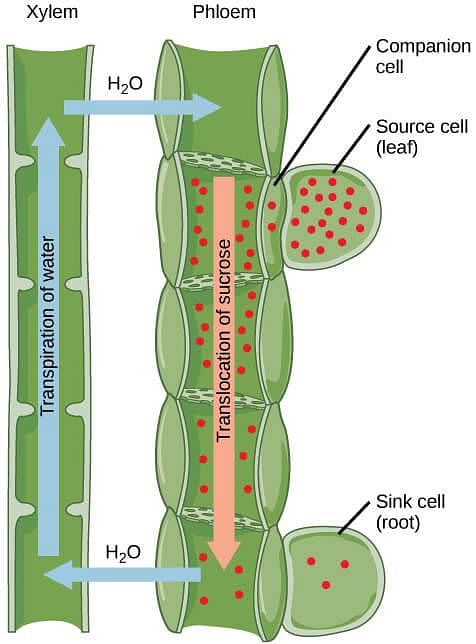 Ans: According to the pressure flow hypothesis, food is prepared in the plant leaves in the form of glucose. Before moving into the source cells present in the phloem, the prepared food is converted into sucrose. Water moves from the xylem vessels into the adjacent phloem, thereby increasing the hydrostatic pressure in the phloem. Consequently, the sucrose moves through the sieve cells of the phloem.

Q.16. What causes the opening and closing of guard cells of stomata during transpiration?

Ans: The tiny pores present on the surfaces of leaves, called stomata, help in the exchange of gases. Each stoma consists of bean-shaped or dumbbell-shaped guard cells. The epidermal cells surrounding the guard cells are modified to form subsidiary cells. 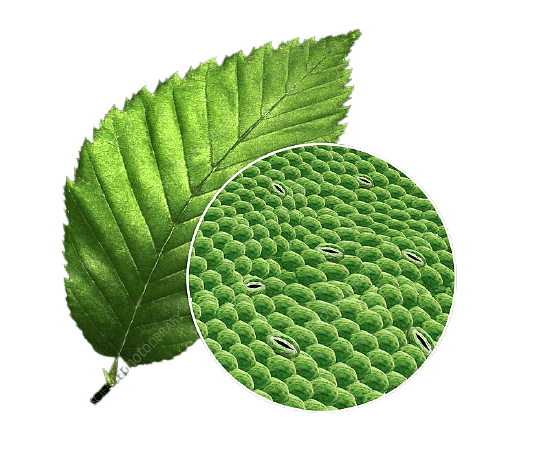 At the time of the opening of the stomata, the turgidity of the guard cells increases. As a result, the outer walls bulge and the inner walls become crescent-shaped. The stomatal opening is facilitated by the radial arrangement of the microfibrils.

At the time of the closing of the stomata, the guard cells lose their turgidity, the outer and inner walls retain their original shapes, and the microfibrils get arranged longitudinally.

The document NCERT Solutions: Transport in Plants Notes | Study Biology Class 11 - NEET is a part of the NEET Course Biology Class 11.
All you need of NEET at this link: NEET