The document NCERT Solutions - Employment: Growth, Informalisation and Other Issues Commerce Notes | EduRev is a part of the Commerce Course Economics Class 11.
All you need of Commerce at this link: Commerce

Question 1: Who is a worker?Answer: People work for earning their livelihood. A person who is involved in production activity contributing to the flow of goods and services in the economy is called a worker. In other words, a worker is regarded as an economic agent who contributes to the production of goods and services, thereby, to the GDP during a particular year. A worker renders services to others and receives rewards in the form of wages, salaries or in kind. Hence, we can say that when an individual is engaged in a production activity or self employed and contributes to the generation of GDP, then, that person is referred to as a worker. For example, a doctor, an engineer working in a factory, etc.Question 2: Define worker-population ratio.Answer: Worker-Population ratio is defined as the proportion of population that is actively contributing to the production of goods and services. It is measured by the ratio between the country’s workforce and its total population. This ratio acts as an indicator for assessing the employment level in a particular country at any point of time. Higher the worker-population ratio higher is the engagement of people in the productive activities and vice-versa. Worker-population ratio is estimated by dividing the total work force by the total population and multiplying by 100. Algebraically,

Question 4: Find the odd man out (i) owner of a saloon (ii) a cobbler (iii) a cashier in Mother Dairy (iv) a tuition master (v) transport operator (vi) construction worker.Answer: Tuition master and the owner of a saloon are the odd man out. This is because all others are hired while these two are self employed. Tuition master and the owner of a saloon are engaged in their own business and own profession, whereas, the cobbler, the construction worker, the transport operator and the cashier in the Mother Dairy are hired and render their services to others in exchange of rewards in the form of salaries or wages.Question 5: The newly emerging jobs are found mostly in the ____________sector(service/manufacturing).Answer: The newly emerging jobs are found mostly in the ­­ service sector.The service sector is taking a lead over the manufacturing sector as a source of employment. It includes trade, commerce, banking, insurance, health and other services. These services are developing at a faster pace than the manufacturing and other allied production activities. This is because of the globalisation of the economy.Question 6: An establishment with four hired workers is known as __________ (formal/informal) sector establishment. Answer: An establishment with four hired workers is known as informal sector establishment.An informal sector is an unorganised sector of the economy. It includes all enterprises that hire less than 10 workers, except farming and self employment ventures. Therefore, an establishment with four hired workers is known as informal sector establishment.Question 7: Raj is going to school. When he is not in school, you will find him working in his farm. Can you consider him as a worker? Why?Answer: Yes, Raj can be considered as a worker. This is because his work is contributing to the total output of the farm. Further, as implied by the definition of worker, a person who is engaged in an economic activity or is assisting anyone in an economic activity and, thereby, contributing to the GDP of the country is regarded as worker, so, Raj is a worker.Question 8: Compared to urban women, more rural women are found working. Why?Answer: The percentage of female workforce in the rural areas is nearly 30 % while it is only 14 % in the urban areas. This depicts that as compared to the urban women more rural women accounts for higher share in the female workforce. While on the one hand, the rural women are less educated, unskilled and low productive, on the other hand, urban women being more educated and more skilled and productive have higher probability to get employment. Ironically, the urban female accounts for lesser share in the female workforce as compared to their rural counterparts. The following are the reasons for low share of urban females in the total female workforce:As in the agricultural and allied activities, high degree of skills and specialisations is not required, so, rural women engage themselves to support their family on farms.As poverty in the rural areas is more widespread than in the urban areas, so, the rural women engage themselves in low productive jobs just to support the livelihood of their families.As the urban families usually earn comparatively higher income than the rural families and, further, poverty in the urban areas is not as widespread as that of in the rural areas, so, there is lesser need for female members to get themselves employed.The decision to take up jobs by the female members rests on the family’s decision rather than her individual decision.Although female literacy in India is improving, yet it has to get much better before urban female accounts for higher share in the total female workforce.Question 9: Meena is a housewife. Besides taking care of household chores, she works in the cloth shop which is owned and operated by her husband. Can she be considered as a worker? Why?Answer: A person who is involved in the production activity and contributes to the generation of GDP is referred to as worker. As here Meena works in the cloth shop to support her husband and contributes to GDP by rendering her services, so, she can be considered as a worker.Question 10: Find the odd man out (i) rickshaw puller who works under a rick- shaw owner (ii) mason (iii) mechanic shop worker (iv) shoeshine boy.Answer: Shoe shine boy is a odd man out. All others (a rickshaw puller, a mason, and mechanic shop worker) are hired workers. They render their services to their employers and receive rewards in the form of salaries or wages in return. On the other hand, shoe shine boy is a self-employed worker and carries out his occupation himself. In other words, he is engaged in his own profession.Question 11: The following table shows distribution of workforce in India for the year 1972-73. Analyse it and give reasons for the nature of workforce distribution. You will notice that the data is pertaining to the situation in India 30 years ago!

Answer: (i) The total workforce in India in the year 1972-73 was 234 million that includes 195 million workforce of rural and 39 million of the urban population. This indicates a greater involvement of rural workforce comprising of 83 % of the total workforce as compared to 17% of the urban workforce. This is because a majority of rural population was engaged in agricultural and allied sectors.(ii) The rural workforce comprises of 64% of the male workforce and 36% of female workforce. On the contrast, the urban workforce comprises of about 82% of male workforce and 18% of female workforce. The participation of males in both rural as well as in the urban areas is higher than the females because of the lack of opportunities available to women for acquiring education. Also, families often discouraged female members to take up job and, consequently, women were confined to household works only.(iii) Comparing urban female work force with that of the rural female workforce, we can conclude that the females in the rural areas formed 36 % of the workforce, whereas, the females in the urban areas formed only 18% of the workforce. In the rural areas, despite a majority of the population was engaged in farming and allied activities, agricultural sector had low productivity. Consequent to the low productivity, rural people had low earnings that further led to widespread poverty in the rural areas.Thus, it can be concluded by analysing the above data that Indian economy suffered from low productivity, acute unemployment and widespread poverty, disguised unemployment in agricultural sector and low female participation rate in the workforce 30 years ago.Question 12: The following table shows the population and worker population ratio for India in 1999-2000. Can you estimate the workforce (urban and total) for India? 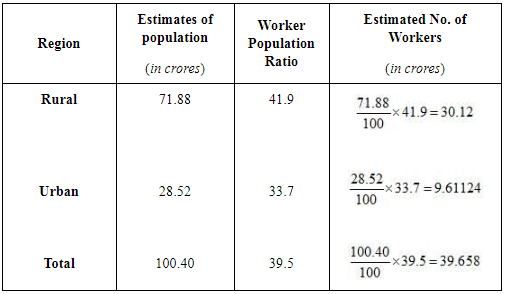