The document NCERT Solutions - Chapter 6: Colonialism and the City, SST, Class 8 | EduRev Notes is a part of the UPSC Course NCERT Hindi Textbooks (Class 6 to Class 12).
All you need of UPSC at this link: UPSC

Q 1. State whether true or false:

(a) In the Western world, modern cities grew with industrialisation.

(b) Surat and Machlipatnam developed in the nineteenth century.

(c) In the twentieth century, the majority of Indians lived in cities.

(d) After 1857 no worship was allowed in the Jama Masjid for five years.

(a)The first structure to successfully use the dome was called the This question is not clear. 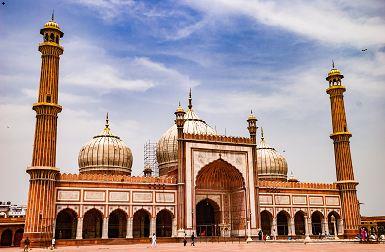 Fig: Jama Masjid.Note that Jama Masjid was the first mosque in India with minarets and full domes.

• This question is not clear. Note that Edward Lutyens and Herbert Bake rwere the two architects who designed New Delhi and its buildings.

(c)The British saw overcrowded spaces as unhygienic and unhealthy, the source of disease.

Q 4. Who lived in the "white" areas in cities such as Madras?

Answer The British were lived in the "white" areas.

Q 5. What is meant by de-urbanisation?

Answer For the sake of convenience of trade the British developed new centers of trade like Calcutta, Madras and Bombay on eastern and Western coastal areas respectively. In late 18th century these places became as Presidency cities under the British rule.These cities which were very important right from the ancient as well as during the Mughal period gradually lost their importance. Simultaneously many towns manufacturing specialized goods declined due to a drop in the demand for what they produced.Old trading centers and ports could not survive when the flow of trade moved to the new centers. Trades and exports via the earlier important ports like Surat, Masulipatnam etc. failed dramatically.At the same time, the earlier centers of regional power collapsed when local rulers were defeated by the British and new centers of administration emerged.As a result of all these happenings more and more people began to shift from these places which used to be important cities in the past. This process is often described as de-urbanization.

Q 6. Why did the British choose to hold a grand Durbar in Delhi although it was not the capital?

Answer Though Calcutta was the capital of the British, they were aware of the symbolic importance of Delhi. It was the city where the Mughals had ruled.

It was the same city that had become the rebel stronghold in the rebellion of 1857, a rebellion that had momentarily threatened the collapse of the British rule in India. It was therefore important to celebrate British power with pomp and show at this very place.

It was at this Durbar that the decision to shift the capital of India from Calcutta to Delhi was announced. What these displays did was to show to the people of India the ultimate power and supremacy of the British.

Q 7. How did the Old City of Delhi change under the British rule?

Answer The Old City of Delhi was constructed as a walled city with 14 gates, adjoining a fort-palace complex, with the river Jamuna flowing near it. The city was characterised by mosques, havelis, crowded mohallas, narrow and winding lanes and bylanes and water channels. The British gained control of Delhi in 1803.

Before the revolt of 1857, the British adjusted themselves to the Mughal culture of the Old City by living in the Walled City, enjoying Urdu/Persian culture and poetry, and participating in local festivals. The Delhi College was established in 1792, which led to a great intellectual flowering in the sciences as well as the humanities.

However, after the revolt, they embarked on a mission to rid the city of its Mughal past. They razed several palaces, closed down gardens and built barracks for troops in their place. For security reasons, the area around the Red Fort was completely cleared of gardens, pavilions and mosques.

Mosques in particular were either destroyed or put to other uses. No worship was allowed in the Jama Masjid for five years. One-third of the city was demolished, and its canals were filled up. In the 1870s, the Western walls of Shahjahanabad were broken to establish the railway and to allow the city to expand beyond the walls.

The sprawling Civil Lines area came up in the North of the city. This was the place where the British began living. The Delhi College was turned into a school, and shut down in 1877. The British constructed a new city, known as New Delhi, South of the Old City.

Built as a complete contrast to the Old City, New Delhi became the centre of power. The Old City, meanwhile, was pushed into neglect.

Q 8. How did the Partition affect life in Delhi?AnswerThe partition of India in 1947 led to a massive transfer of people on both sides of the new border. As a result, the population of Delhi swelled (nearly 500,000 people were added to Delhi's population). Delhi became a city of refugees, with people living in camps, schools, military barracks and gardens.

The riots accompanying the Partition led to the killing of thousands of people, and the looting and burning of their houses. Over two-third of the Delhi Muslims migrated, and almost 44,000 homes were abandoned.

Their places were taken over by Sikh and Hindu refugees from Pakistan. These refugees were mostly rural landlords, lawyers, teachers, traders and shopkeepers. After Partition, their lives changed as they took up new jobs as hawkers, vendors, carpenters and iron smiths.

The influx of Sikh and Hindu refugee population and the outflow of the Muslim population changed the social milieu of Delhi. An urban culture largely based on Urdu was overshadowed by new tastes and sensibilities, in food, dress and the arts.