Q1.Explain the following terms
Answer
(a) RAM: Random access Memory refers to memory that can be selected and used randomly. The information stored here disappears the very moment the machine is turned off. It is also referred to as volatile memory.

(b) Nibble: A nibble is a four-bit aggregation.

(c) Digital Computers:These computers deal with data in the form of numbers. They mainly operate by counting and performing arithmetic & logical operations on numeric data. Such computers are ‘many problems’ oriented.

(d) Ethernet Port: An Ethernet port is an opening on computer network equipment that Ethernet cables plug into.

Q2. Name any two utility softwares.
Answer
Text Editor facilitate the creation of flawless text documents. WordPad and Notepad are the commonly used text editors.Compression utilities are used to compress the selected files. It helps to save the space on the disk and to transfer heavy files on a network.

Q3. Why there is a need of Auxiliary Memory?
Answer
The content on the RAM is erased when electric power is switched off. So, it becomes necessary to store this data for future use, somewhere else. Since, primary storage is expensive too; we need a relatively cheaper form of backup storage which can store vast quantities of information. Thus, Auxiliary Memory devices become an important part of the computer.

Q4. Differentiate the following
(a) Hardware vs Software
Answer
Hardware is any part of the computer that has a physical structure that can be seen and touched, though some may be so tiny that they are invisible to the naked eye.
Software is the instruction set that tells the computer how to perform tasks. Software is intangible i.e., that cannot be seen and touched, but its effect is clearly defined.

(b) RAM vs ROM
Answer
Random access Memory refers to memory that can be selected and used randomly. The information stored here disappears the very moment the machine is turned off. It is also referred to as volatile memory.

Read only Memory is permanently built into the computer at the time of production.
The information from this memory can only be read and it is not possible to write fresh information into it. It permanently stores a set of instructions which instructs the computer how to work.

(c) Application Software vs System Software
Answer
Application Software includes programs that direct the computer to carry out specific tasks. Often, multiple programs are integrated to create an application. For example: To write error free documents, Word Processors are used such as OpenOffice.org Writer, MS Word etc. For calculations, Spreadsheets are used such as OpenOffice.org Spreadsheet, Ms Excel etc.System software includes the programs that enable the computer’s hardware to work with and run the application software. System software is the interface between user and the other programs and the computer’s hardware. It includes operating System and Utility software.

(d) Digital vs Analog
Answer
Computers in which continuously variable physical quantities, such as electrical potential, fluid pressure, or mechanical motion, are used to represent (analogously) the quantities in the problem to be solved are called analog computers.Digital computers deal with data in the form of numbers. They mainly operate by counting and performing arithmetic & logical operations on numeric data. Such computers are ‘many problems’ oriented.

Q6. Explain in brief all the generations of computer .
Answer
1.I Generation (1945 – 55): Bulky, vacuum based and costly, used assembly language which was translated to machine level language for execution. These computers were used mainly for scientific calculations. Examples: ENIAC, EDSAC, EDVAC, UNIVAC.

2. II Generation (1955 – 65) Smaller than vacuum based computers, but better performance-wise, used transistors instead of vacuum tubes. High level languages such as FORTRAN and COBOL were used. Examples: IBM 7030, Honeywell 400.

4. IV Generation (1975 – 89) Microprocessors were introduced where complete processors and large section of main memory could be implemented in a single chip. CRT screen, laser & ink jet printers, scanners etc. were developed and so were LAN and WANS. C and UNIX were used. Examples: Intel’s 8088,80286,80386,80486 etc.

Q7. Draw and explain IPO cycle
Answer
Input-Process-Output cycle or IPO refers to the stages that a set of instructions undergo
to achieve the desired result. The information, through various input devices, is fed into the system to be processed by the CPU. The information is then received as output in the desired format and presented in human readable form. 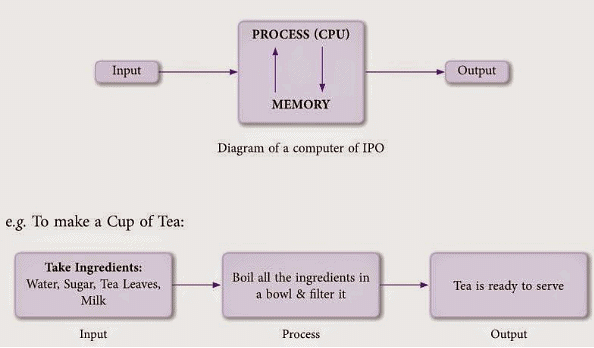 Q9. How the computers are classified according to their processing capabilities.
Answer
1. Super Computer: It is the fastest type of computer. These computers are used to solve problems involving quantum mechanical physics, weather forecasting, climate research, molecular modelling such as computing the structures and properties of chemical compounds, simulations, cryptanalysis, and many others.
2. Mainframe computers can also process data at very high speeds, but less than that of super computers. Normally, they are used in banking, airlines and railways etc. for their applications.

Q10. Differentiate between Ethernet Port and USB.
Answer
USB: Universal Serial Bus, a protocol for transferring data to and from digital devices. Many digital cameras and memory card readers connect to the USB port on a computer.
Ethernet Port: There is a built in Ethernet port on most computers to connect it to a wired network. Ethernet ports are also found on all popular broadband routers.