Q1.1. Define the term ‘amorphous’. Give a few examples of amorphous solids.

Ans: Amorphous solids are solids without a regular/ definitive arrangement of its constituent particles (ions, atoms or molecules) and they possess something called the short-range order i.e., a regular and periodically repeating arrangement is seen only over short distances, e.g., rubber, glass.Q1.2. What makes a glass different from a solid such as quartz? Under what conditions could quartz be converted into glass?

Now, density of the unit cell

From equation (i), we have:

If the edge lengths are different (say a, b and c), then equation (ii) becomes: 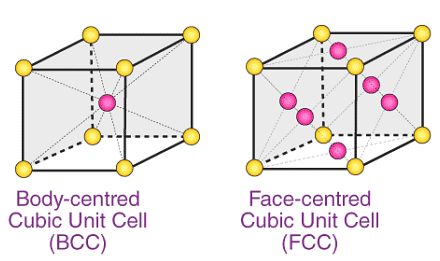 (ii) The constituent particles of ionic crystals are ions. These ions are held together in three-dimensional arrangements by the electrostatic force of attraction. Since the electrostatic force of attraction is very strong, the charged ions are held in fixed positions. This is the reason why ionic crystals are hard and brittle.

It is also given that the atoms of P are present at the body centre.Therefore, number of atoms of P in one unit cell = 1This means that the ratio of the number of P atoms to the number of Q atoms, P:Q = 1:1Hence, the formula of the compound is PQ.The coordination number of both P and Q is 8.Q.1.13. Niobium crystallizes in a body-centred cubic structure. If density is 8.55 g cm−3, calculate atomic radius of niobium using its atomic mass 93 u.Ans:  It is given that the density of niobium, d = 8.55 g cm−3Atomic mass, M = 93 gmol−1As the lattice is bcc type, the number of atoms per unit cell, z = 2We also know that, NA = 6.022 × 1023 mol−1Applying the relation: 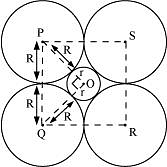 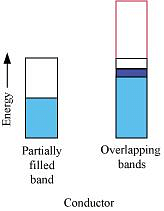 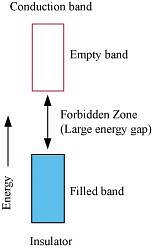 (ii) In the case of a conductor, the valence band is partially filled or it overlaps with a higher energy, unoccupied conduction band. So, the electrons can flow easily under an applied electric field. 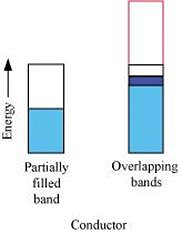 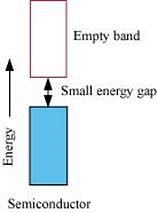 On the other hand, the valence band of a semiconductor is filled and there is a small gap between the valence band and the next higher conduction band. Therefore, some electrons can jump from the valence band to the conduction band and conduct electricity.Q.1.19. Non-stoichiometric cuprous oxide, Cu2O can be prepared in laboratory. In this oxide, copper to oxygen ratio is slightly less than 2:1. Can you account for the fact that this substance is a p-type semiconductor?Ans:  In the cuprous oxide (Cu2O) prepared in the laboratory, copper to oxygen ratio is slightly less than 2:1. This means that the number of Cu+  ions is slightly less than twice the number of O2− ions. This is because some Cu+  ions have been replaced by Cu2+  ions. Every Cu2+  ion replaces two Cu+  ions, thereby creating holes. As a result, the substance conducts electricity with the help of these positive holes. Hence, the substance is a p-type semiconductor.Q.1.20. Ferric oxide crystallises in a hexagonal close-packed array of oxide ions with two out of every three octahedral holes occupied by ferric ions. Derive the formula of the ferric oxide.Ans: Let the number of oxide (O2−) ions be x.

So, number of octahedral voids = x

It is given that two out of every three octahedral holes are occupied by ferric ions.

Hence, the formula of the ferric oxide is Fe2O3.