The document NCERT Solutions - Solutions (Part - 4) Notes | EduRev is a part of NEET category.
All you need of NEET at this link: NEET

Q.35. Suggest the most important type of intermolecular attractive interaction in the following pairs.(i) n-hexane and n-octane   (ii) I2 and CCl4(iii) NaClO4 and water(iv) methanol and acetone(v) acetonitrile (CH3CN) and acetone (C3H6O).Ans.
(i) Van der Waal’s forces of attraction.(ii) Van der Waal’s forces of attraction.(iii) Ion-dipole interaction.(iv) Dipole-dipole interaction.(v) Dipole-dipole interaction.Q.36. Based on solute-solvent interactions, arrange the following in order of increasing solubility in n-octane and explain. Cyclohexane, KCl, CH3OH, CH3CN.Ans. n-octane is a non-polar solvent. Therefore, the solubility of a non-polar solute is more than that of a polar solute in the n-octane.The order of increasing polarity is:Cyclohexane < CH3CN < CH3OH < KClTherefore, the order of increasing solubility is:KCl < CH3OH < CH3CN < CyclohexaneQ.37. Amongst the following compounds, identify which are insoluble, partially soluble and highly soluble in water?(i) Phenol (ii) Toluene (iii) Formic acid(iv) Ethylene glycol(v) Chloroform (vi) Pentanol.Ans.
(i) Phenol (C6H5OH) has the polar group −OH and non-polar group −C6H5. Thus, phenol is partially soluble in water.(ii) Toluene (C6H5−CH3) has no polar groups. Thus, toluene is insoluble in water.(iii) Formic acid (HCOOH) has the polar group −OH and can form H-bond with water. Thus, formic acid is highly soluble in water.(iv) Ethylene glycol

has polar −OH group and can form H−bond. Thus, it is highly soluble in water.(v) Chloroform is insoluble in water.(vi) Pentanol (C5H11OH) has polar −OH group, but it also contains a very bulky non-polar −C5H11 group. Thus, pentanol is partially soluble in water.Q.38. If the density of some lake water is 1.25 g mL−1 and contains 92 g of Na  ions per kg of water, calculate the molality of Na  ions in the lake.Ans. Number of moles present in 92 g of Na+ ions = 92g / 23g mol-1 = 4 molTherefore, molality of Na + ions in the lake = 4 mol / 1 kg = 4 mQ.39. Vapour pressure of pure acetone and chloroform at 328 K are 741.8 mm Hg and 632.8 mm Hg respectively. Assuming that they form ideal solution over the entire range of composition, plot ptotal’ pchloroform’ and pacetone as a function of xacetone. The experimental data observed for different compositions of mixture is.

Ans. From the question, we have the following data 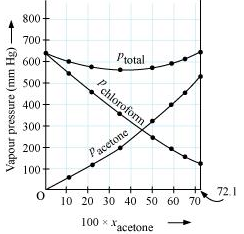 = 0.599
= 0.6Q.43. The depression in freezing point of water observed for the same amount of acetic acid, trichloroacetic acid and trifluoroacetic acid increases in the order given above. Explain briefly.Ans.

= 0.3264 mol kg-1Let α be the degree of dissociation of CH3CH2CHClCOOH undergoes dissociation according to the following equation: