The World Population: Distribution, Density and Growth1. Choose the right answer from the four alternatives given below:(i) Which one of the following continents has the highest growth of populations? 1. Africa 2. South America 3. Asia 4. North America Ans. (3) Asia(ii) Which of the following is not an area of sparse population? 1. The Atacama 2. South-east Asia 3. Equatorial regions 4. Polar-regions Ans. (2) South-east Asia(iii) Which one of the following is not a fact? 1. Water shortage 2. Medical/educational facilities 3. Unemployment 4. Epidemics Ans. (2) Medical/educational facilities

(iv) Which one of the following is not a fact?

1. Availability of water: people prefer to live in areas where fresh water is easily available for drinking, and for cattle, crops, industries and navigation.

3. Climate and Soils: Areas with a comfortable climate, where there is not much seasonal variation have high population whereas, extreme climates such as very hot or cold, deserts and heavy rainfall are uncomfortable for human living and have low population. Fertile soils are important for agricultural and related activities. Therefore, areas which have fertile loamy soils have more people living on them as these can support intensive agriculture.

(ii) There are number of areas with high population density in the world. Why does this happen? Ans. High density is found due to the following reasons:

1. Terrain of land is a potent factor which influences the concentration and growth of population. Normally speaking, plain areas encourage higher density of population as compared to mountain regions.In contrast to this, the Great Plain of North India is a land of extremely gentle slope and offers great opportunities for the growth of agriculture, transport and industries.This results in higher concentration of population. Although the Great Plain of North India covers less than one fourth of the country’s land area, it is the home to more than half of India’s population

2. Rich and fertile soil always help in the growth and development of agricultural activities with substantially high yield per hectare. This is so because fertile lands produce a variety of crops to support dense population so one can see that East and South Asian Region and northern plains of India are densely populated.

5. Population density in an area depends to a large extent on the type and scale of economic activities. Same geographic conditions provide different opportunities for people with different types and scale of economic activities. Technological and economic advancement can bring about significant changes in population distribution of an area. For instance, the Prairies of North America offered different opportunities for the Indians with their hunting economy, the nineteenth century ranchers, the later settled agriculturist and finally the modern industrialized and largely urbanized society.

(iii) What are the components of population change?

2. Death rate- It is a measure of the number of deaths (in general,or due a specific cause) in a particular population ,scaled to the size of that population, per unit of time. It is typically expressed in units of deaths per 1,000 individuals per year. The Crude Death Rate is the total number of deaths per year per 1,000 people. The crude death rate depends on the age(and gender) specific mortality rates and the age distribution of the population.

3. Migration- Migration is the movement by people from one place to another with the intentions of settling permanently in the new location. Migration may be individuals, family units or in large groups. This movement change the population of a place.

4. Answer the following questions in about 150 words. (i) Discuss the factors influencing in the distribution and density of population in the world? Ans. The factors are grouped into three categories:(a) Geographical Factor

i. Availability of water: People prefer to live in areas which fresh water is easily available for drinking, and for cattle, crops, industries and navigation.E.g. it is because of this that river valleys are among the most densely populated areas of the world.

ii. Landforms: People prefer living on flat plains and gentle slopes rather than on mountainous and hilly areas. This is because plain areas are favourable for the production of crops and to build roads and industries. Whereas, the mountainous and hilly areas are unfavourable for the development of transport network, agriculture and industries.E.g. The Ganga plans are among the most densely populated areas of the world while the mountainous zones in the Himalayas are sparsely populated.

iii. Climate: Areas with a comfortable climate, where there is not much seasonal variation Material downloaded from 6 / 8 have high population. Whereas, extreme climates such as very hot or cold, deserts and heavy rainfall are uncomfortable for human living and have low population.E.g. Mediterranean regions are inhabited since early periods in history due to their pleasant climate.

iv. Soil: Pertile soils are important for agricultural and related activities activities. Therefore, areas which have fertile loamy soils have more people living on them as these can support intensive agriculture.E.g. Northern plains in India are most densely populated.

i. Minerals: Areas with rich mineral deposits attract mining and industrial activities. Therefore, skilled and semi-skilled workers move to these areas for employment and make them densely populated. E.g Katanga Zambia copper belt in Africa is one such good example.

ii. Urbanisation: People migrate in the cities for better employment opportunities, educational and medical facilities, and better means of transport and communication and good civic amenities. Mega cities of the world continue to attract a large number of migrants every year. E.g. Delhi and Mumbai are most densely populated cities of India.

iii. Industrialisation: Industrial belts provide job opportunities and attract a large number of people. These include not just factory workers but also transport operators, shopkeepers, bank employees, doctors, teachers and other service providers. E.g the Kobe-Osaka region of Japan is thickly populated because of the presence of a number of industries.

i. Religious: Some places attract more people because they have religious or cultural significance. E.g. In the USA people of different nationalities prefer their own regions where common culture and tradition are present.

ii. Political unrest and wars: In the same way, people tend to move away from places where there is social and political unrest. E.g. Refugees from Ethiopia, Sudan, Sri Lanka, etc. have moved out from their own countries.

Ans. There are three stages of demographic transition: 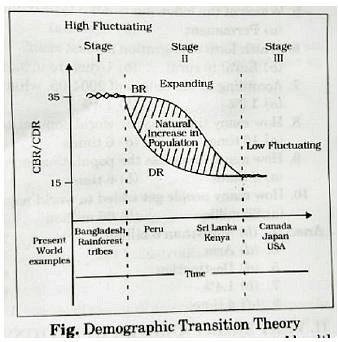 1. First Stage: In the stage of demographic transition, there is high fertility and high mortality. Because people produce more children to compensate for the deaths caused by epidemics and variable food supply. In it, the population growth is rather slow. Most of the people are engaged in agricultural activities. Most of the people are illiterate. There is   very low levels of technology. Approximately, 200 years ago all the countries of the world were in this stage.

2. Second Stage: In the initial phase, the fertility remains high. But it declines in due course of time. Improvement in sanitation and health condition, leads to decline in mortality. There is a big gap between fertility and mortality rate. That is why the net addition to population is higher.

3. Third Stage: In this stage, the fertility and mortality decline simultaneously, The population either remains stable or increased with a slow pace. The population becomes urbanised, literate and technically advanced.