Correct Answer is Option (iv)Messengers were sent throughout the kingdom to announce a reward for those who could answer the questions. 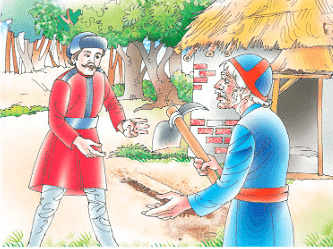 Q.3. Complete the following sentences by adding the appropriate parts of the sentences given in the box.

Working with the Text

Q.2. In answer to the second question, whose advice did the people say would be important to the king?

Q.3. What suggestions were made in answer to the third question?Ans: In answer to the third question, some said that the most important thing was science. Others said fighting, and yet others chose religious worship.Q.4. Did the wise men win the reward? If not, why not?Ans: No, none of the wise men won the reward. As he got very different answers to his questions, the king was not satisfied, and therefore, he chose not to give the reward to anyone.Q.5. How did the king and the hermit help the wounded man?

Q.6. (i) Who was the bearded man?Ans: The bearded man was an enemy of the king. The king had put the man's brother to death and had also seized his property. That is why he wanted to take revenge on the king.

(ii) Why did he ask for the king's forgiveness?Ans:

Q.7. The king forgave the bearded man. What did he do to show his forgiveness?Ans: The king forgave the man. He showed his forgiveness by telling him that he would send his servants and his own doctor to look after him. He also promised to give back the man his property.Q.8. What were the hermit's answers to the three questions? Write each answer separately. Which answer do you like most, and why?Ans:

Use any three of the above words in sentences of your own. You may change the form of the word.

Ans: Asking for forgiveness is as noble as willingness to forgive.