A.1 Complete the following sentences using the correct form of the verbs given in brackets.

A.2 When do we use the passive voice?

We use the passive voice when we are more interested in the action than the person who does it or when we do not know the active subject .Read the following sentences and using the given clues, find out the reason for the use of the passive construction as in the Example above.

2. The Bank was looted last night.Clue: Have the police caught the culprits?____Ans.  It is understood that robbers looted the bank, but the stress should be on "the bank".

6. Employer: On account of tight financial condition, bonus will not be paid this year.Clue: If it is some good news, what voice will the employer use?____ Ans.  Active Voice: The company will pay bonus because of handsome profits.

7. I got my hair cut.Clue: Look at the construction using 'got'.____Ans. Passive Voice: 'I got' means 'I've got'. Generally 'have' is not written along with got.

A.3 Match the excerpts below with the text types given in the box.

Excerpts1. The tea leaves are picked and left to dry in the sun.2. 20 ml of the salt is taken in a test tube and heated over the flame of a Bunsen burner.3. Many villagers were adversely affected by the flash flood. It is estimated that nearly half of the standing crop has been submerged in water.

A.4 Read the following excerpt from a news story and answer the questions given below the excerpt.

MAESAI (THAILAND). At least 74 people were killed in a strong earthquake that struck Myanmar, state media said on Friday, while a series of aftershocks have caused panic but only limited damage in Thailand and Laos.

The death toll from Thursday's 6.8 mgnitude tremor was expected to rise slightly in Myanmar after 225 homes and nine government buildings were destroyed. Over 100 people were injured, according to state television.

The quake sparked panic, but no major damage in other countries across southeast Asia has been reported. An aftershock of an estimated magnitude of  5.5 rattled Thailand on Friday but caused limited damage, although residents living in properties close to the epicentre were advised to leave their homes.- Hindustan Times - March 26, 2011

4. Does the re-written paragraph read well or is it a little awkward? Give reasons for your answer. _____Ans.  The report in active voice appears to be little awkward because it emphasizes on who did it rather than what happened.

A.5 Now read the following extracts from a passage about a diamond:

a. The Jacob Diamond is believed to have been mined in Africa and was bought in London by Shimla-based trader called A.M. Jacob, after whom it is named. b. Weighing 184.75 carats, it was reckoned to be the world's seventh largest diamond. c. The Jacob Diamond was bought by the sixth Nizam of Hyderabad, Mahbub Ali Khan. d. It was considered to be such a lucky stone that when the Nizam was offered Rs. 1 million by the Agha Khan, he spurned the offer. e. The famous diamond was later purchased by the Indian Government for Rs. 40 crore.

3. Write the appropriate newspaper headline for extract c. above. Use the jumbled words given in the box below:

6. Now read extract d. again. You want to write a headline based on this extract. You also want to focus attention on the Nizam of Hyderabad, not the Agha Khan. Write a headline to summarise this extract in not more than five words. Ans. Nizam spurns offer of Rs 1- Crore.

A.6 Now practise writing a few headlines based on the following cues.

a. e.g. Police - received anonymous tip / complaint - managed to catch culprits - produced in courtCULPRITS CAUGHT AND PRODUCED IN COURT Expansion: The culprits were caught and prosecuted by the police.

A.7 In two places in the incomplete sentence there has been some reduction, in order to avoid repetition.

Read the following paragraph, which contains some repetition. Edit and rewrite the sentences so that you have one improved sentence.

Now give the sentence you have written a headline. Some of it has been done for you. Ans. Headline: Policeman  Injured by Crowd, Rescued by Two College Students

b. Suppose that you wish to focus attention on the kindness or bravery of the students who helped the policeman, rather than on the policeman himself. Rewrite passage a. Above so that the focus is on the students, and give your passage a headline.Ans. Two Arun College students lifted up the policeman, after having being injured by the angry crowd. they carried him to the nearby ambulance and then took him to the city hospital.

B. Present Passive B1. Read the set of instructions below and underline the main verb in each sentence.

HOW TO MAGNETISE A SCREWDRIVER USING A COIL1. Place a screwdriver inside a coil carrying a direct current.2. It becomes magnetised.3. Remove it from the coil.4. Place the screwdriver in iron filings.5. It attracts the filings.

B.2 Now read these instructions.

HOW TO DEMAGNETISE A SCREWDRIVER USING A COIL1. Place the magnetised screwdriver blade inside the coil.2. Pass an alternating current through it.3. Slowly withdraw the screwdriver from the coil to a distance of about on metre while the current is flowing.4. It becomes demagnetised.5. Switch off the current.6. Place the screwdriver in iron filings.7. It does not attract the filings.

Write your own description of this experiment, using the Present Passive where appropriate.A magnetised screwdriver is placed inside the coil.....________

B.3 As illustrated in India Today, September 1996, Ponniah Ramar, 34, an amiable individual from a Tamil Nadu village, claims to be able to convert a bucket of water into half a bucket of volatile fuel by adding a secret herb - or so he says! Here is the illustration of the process of preparing the fuel. Write a report for the Junior Science Digest. You may use a combination of active and passive voice in your report, depending on what you wish to focus attention on. 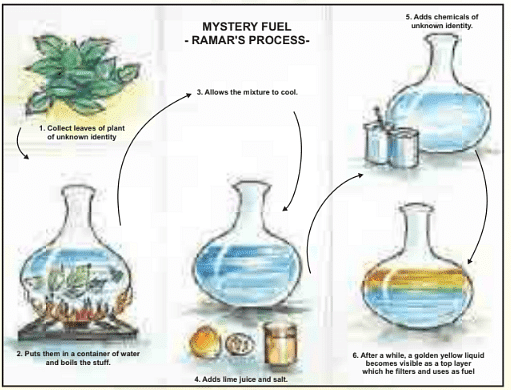 D. Modals with the Passive

Look at the picture below. At present this room is in a terrible state. Suggest what should be done to make it fit for a student to live and work in. Use different modals in the Passive voice, as in the example. 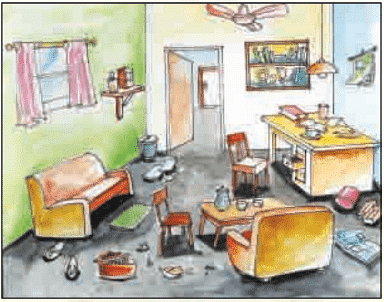 Ans.1. Trash must be collected and be kept in a garbage bag.2. Floor must be wiped.3. Books should be arranged on the table and drawers must be closed.

E Present Perfect Passive Two months later, you return to the room to observe the changes made.Write a letter to a friend asking him to pay a visit to your newly- renovated room. Describe in detail what has been changed. Use the space given.

The walls have been painted with rainbow colours. The floor has been cleaned up and new tiles have been laid. The room has been renovated with nice decor. Books have been piled up on the shelf. Extra furniture have been removed. Unwanted things have been thrown out. Dull blinds have been replaced with colourful ones.

G. Getting Something Done

G.1 Study the examples below:

Examples: 1. a) Mr. Akshay Pandey's car was damaged in an accident. b) A mechanic repaired the car.Usually in such situations, type 'b' sentences are rather uncommon. Instead, the same idea would be expressed as

Use the words in brackets to complete the following sentences. Use the structure: 'have/get something done'.

4. A: Can I see the photographs you took during our school day function? B: I'm afraid _______ (not/ the film/develop) yet. Ans. I'm afraid the film has not got developed yet.

G.2 Answer the following questions using 'to have something done'. The first one has been done as an example.

1. Why did you go to the garage? Ans. To have my car serviced.

2. Why did you go to the doctor? Ans. To have my health checked up.

3. Why did you go to the bank? Ans. To have my money deposited.

4. Why did you go to the tailor? Ans. To have my dress altered.

5. Why did you go to the photo studio? Ans. To have myself photographed.

6. Why did you go to the dentist's? Ans. To have my teeth cleaned up.

H. Passives - Summary H.1 Match the items from A and B to make meaningful sentences. There is sometimes more than one sensible combination.

H.2 Complete the following sentences appropriately by using the passive form of the given verbs.

3. We didn't play volleyball yesterday. The match........ (cancel)Ans. was cancelled

H3. Rewrite the paragraph below by changing these sentences into the passive; include the agent only if necessary.

Ans.Two new apartment _buildings have been built by Mckiney Company in the city centre last year_.Recently one of the buildings was damaged by an earthquake. The company offices in the other building was destroyed.The insurance money will be received by the owners to fix the apartments. Money paid for the apartments will not be lost by anyone.

Version AThieves stole the famous Nor Y Koh emerald from the City Museum last night. Police believe the thieves must have forced the locks on the windows and disabled the alarms before the museum attendants had closed the museum for the night. Police have arrested a man whom someone saw acting suspiciously outside the museum.

Version BThe Famous Nor Y Koh emerald was stolen from the museum last night. It is believed that the window-locks had been forced and the alarms disabled before the museum was closed for the night. A man who was seen acting suspiciously outside the museum has been arrested.

Answer:The Famous Nor Y Koh emerald was stolen from the museum last night.  It is believed that the window-locks had been forced and the alarms disabled before the museum was closed for the night. Police have arrested a man whom someone saw acting suspiciously outside the museum.

H.5 Shahin, a newspaper reporter, visited the World Book Fair at Pragati Maidan. Suddenly he saw a stall in flames. He jotted down a few notes in his notepad. Using the cues and your own ideas write a newspaper report in the space provided. Use Active or Passive, depending on what you wish to focus on.

Around 10 am, at World book Fair, the stall of Rendezvous Publishers, a company which has published over 2000 books, caught fire. Smoke and sudden flames spread around and created panic. Fire fighters had to face a tough challenge putting off the fire because of non-availability of water at Pragati Maidan. It is reported that 11 women, 6 men and 14 children were injured in the fire. Four persons are in critical condition and were admitted to ICU.