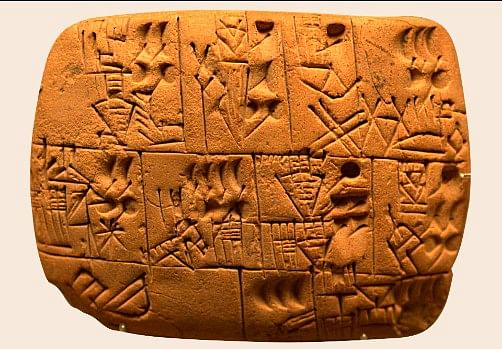 Let's have a look at NCERT Solutions of Writing and City Life.

Q.1. Why do we say that it was not natural fertility and high levels of food production that were the causes of early urbanization?Ans. The development of Mesopotamia from a prosperous village to a city proves that natural fertility and high levels of food production were not the only factors responsible for urbanization. There were other factors as well that caused urbanization, two of which have been explained below:1. Growing demands: Besides food, a growing population needs several other goods and commodities (such as weapons, agricultural tools, potteries.) to fulfill their needs. For this, an agrarian village had to either produce these goods on its own or rely on other villages for these needs via trade. This definitely calls for the need for manufacturing facilities within the village along with a well-developed trade network and transportation. Thus, it can be said that the fulfillment of growing demands facilitated urbanization in Mesopotamia.2. Division of labor: Over time, production expanded in order to meet growing demands; this resulted in different people specializing in specific tasks. This, in turn, helped them to tap and fulfill the growing demands efficiently.  However, to sustain this division of labor, a proper organizational framework was essential. This framework included a class of men who could supervise the work of others. Thus, this organization created a class of administrators and supervisors along with the already existing class of laborers.Q.2. Which of the following were necessary conditions and which the causes of early urbanization, and which would you say were the outcome of the growth of cities: (a) highly productive agriculture, (b) water transport, (c) the lack of metal and stone, (d) the division of labor, (e) the use of seals, (f) the military power of kings that made labor compulsory?Ans. Following were the necessary conditions for early urbanization:1. Highly productive agriculture: It was a necessary condition for early urbanization. It helped in attaining self-sufficiency. Once the agricultural output was secured, people could concentrate on more productive activities, thereby fostering urbanization.2. Preservation of surplus production: Once a village had the source to feed its growing population, people were free to take up other activities such as manufacturing goods and arts. This led to diversity in the activities being performed, thereby leading to urbanism.The causes of early urbanization were:1. Water transport: Transportation helped in the movement of goods from one place to another. It was done by means of road transport and water transport. Water transport was the cheapest mode, as heavy goods could be transported with less effort and in less time as the current of water propelled the boat. Thus, it saved time and money. Water transport helped to connect different towns and villages, thereby establishing trading networks.2. Lack of metal and stone: Let’s take the example of Mesopotamia. Mesopotamia was rich in food resources; however, it lacked metal and stone resources. This facilitated the trade of goods between Mesopotamia and other countries like Turkey and Iran. These Gulf countries were rich in mineral resources, so they traded mineral goods for agricultural products.

The outcomes of the growth of cities were:1. Use of seals: Seals were used to secure the network of the trade from evil practices like black-marketing, hoarding, and adulteration. 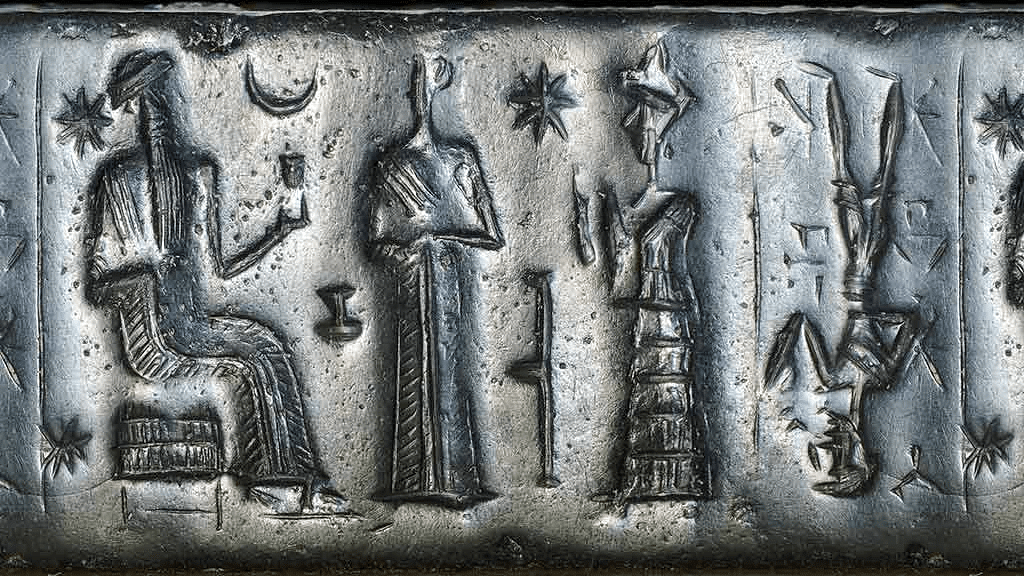 2. Division of labor: When works other than agriculture started to be conducted in the thriving towns, people selected jobs according to their skills. To supervise the work of those people, another group of men was needed. Thus, the division of labor evolved to achieve better efficiency.3. Military power of kings that made labor compulsory: To sustain the trade of goods and services, the kings made labor compulsory. This was done to maintain sufficient resources of labor for the movement of goods from one place to another.Q.3. Why were mobile animal herders not necessarily a threat to town life? Ans.

1. Agriculture and animal rearing were carried out close to each other in this region. Some communities in the kingdom of Mari had both farmers and pastoralists, but most of its territory was used for pasturing sheep and goats.

2. Herders need to exchange young animals, cheese, leather, and meat in return for grain, metal tools, etc., and the manure of a penned flock is also of great use to a farmer. Yet, at the same time, there may be conflict. 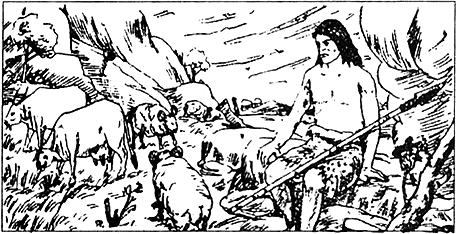 The man tending a herd of animals.3. A shepherd may take his flock to water across a sown field, to the ruin of the crop. Herdsmen being mobile can raid agricultural villages and seize their stored goods. For their part, settled groups may deny pastoralists access to river and canal water along a certain set of paths.

Q.4. Why would the early temple have been much like a house? Ans. The people of Mesopotamia considered the almighty God the owner and protector of the cities, agricultural lands, fisheries, and herds. The gods had the power to both protect and destroy the resources of the people. Such beliefs infused the feelings of respect and fear in the people for their protector. Thus, the people made every effort to keep their gods satisfied and happy. This is how they used to seek blessings from the all-powerful. Building temples just like houses was also a way of providing all the necessary comfort to God and his family.

Economic InstitutionsTrade: Trade was the means by which raw materials and finished products that were not available but were needed could be attained. Mesopotamia did not possess all resources and was in a need to establish trade links with Assyria, Babylonia, and Sumeria. To conduct trade, proper roadways and waterways had to be built and maintained. This was indeed not possible without the initiative and aid of the King. The king also appointed officers who could inspect the incoming goods and levy a charge on those goods.Taxation: Taxation served as a potent source of revenue for Mesopotamia. This important sector was planned and executed by the central authority or the King to ensure its effective organization. To ensure a perennial source of revenue, the tax was imposed on almost every commodity and service such as fishing, farming, and trading.Cultural InstitutionsTemplesSeveral Mesopotamian towns had evolved and developed around temples. People of these temple towns associated themselves with the temples. Every ruler wanted to gain control of the temples by taking the opportunity of this association. 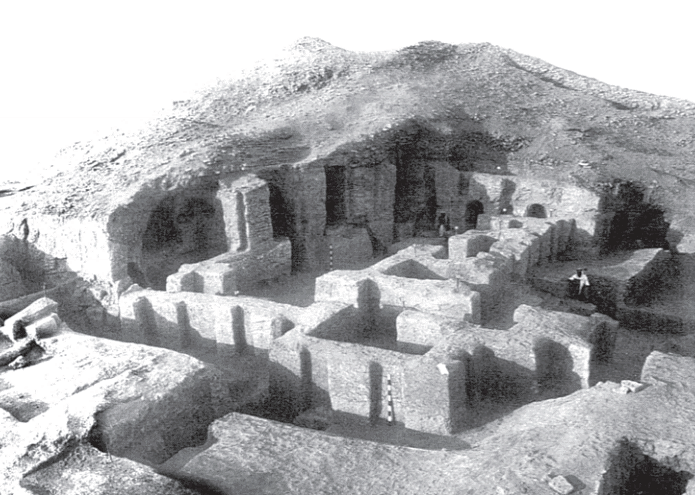 A temple of a later period, c.3000 BCE, with an open courtyard and in-and-out façade (as excavated).

Immense wealth and energy were spent on the beautification of the holy structures. Such works conducted by the King made him popular among the masses and helped him earn a high status and the authority to command the community too.Political InstitutionsFor the proper management of the city, the King had to take several initiatives. To achieve so, he maintained an army for the protection of the city and its people. Maintenance of law and order in the city was the army's primary function. A proper network of messaging was introduced by the King that facilitated uninterrupted relations with other cities and settlements.Q.6. What do ancient stories tell us about the civilization of Mesopotamia? Ans. Literature is one of the most important sources to study the past. It helps us to peep into the past and get a glimpse of the ideas, cultures, and practices of the bygone era. The two most important pieces of literature or stories that throw some light on the Mesopotamian civilization have been discussed below.1. The Bible: There are several biblical references to Mesopotamia, which, over time, have aroused the interest of historians and archaeologists to unearth the long-lost civilization. The Old Testament notes down the location of Mesopotamia and refers to it as the kingdom between the rivers Euphrates and Tigris. It also speaks of a brick-built city named Shimar, which historians have inferred as Sumer. The Bible also helps us to gather information about the population composition of the region. Genesis 11; (Acts 7:2) of the Old Testament mentions that the northern part of the plain of Aram or Syria was inhabited by the ancestors of the Hebrews.2. Epic of Gilgamesh: The Epic of Gilgamesh is a rich source to learn about the religious life of the people of Mesopotamia. The epic states that the people of Mesopotamia were highly religious. All aspects of their lives, including life, death, and love, were associated with one god or goddess. 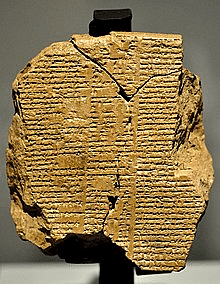 There is a reference to the goddess of creation Aruru, and the god of heaven Anu. The religious beliefs of Mesopotamians also designed their notion of the afterlife. After death, one could move to either hell or heaven. Heaven guaranteed all pleasures, while hell was a sanctum of darkness.