Example: Find out the nodal voltage at each node & current in each loop by using the Nodal method? 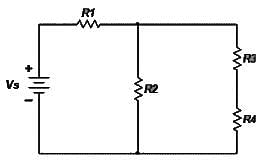 Solution: First of all we have labeled all elements and identified all relevant nodes in the circuit. 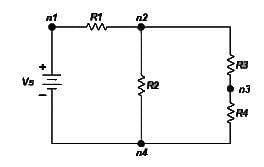 There are a few general guidelines that we need to remember as we make the selection of the reference node.

For the next step we assign current flow and polarities 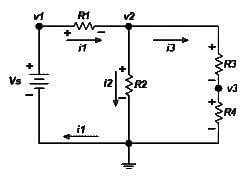 ……………  (4)  Rewrite the above expression as a linear function of the unknown voltages v2 and v3 gives.

……… (7) In defining the set of simultaneous equations, we want to end up with a simple and consistent form. The simple rules to follow and check are

the unknown voltage VK is given by:

with the k-th column replaced by the vector V.So for our example the voltages v2 and v3 are given by:

Nodal Analysis with Floating Voltage Sources. (THE SUPERNODE)If a voltage source V2 is not connected to the reference node it is called a floating voltage source and special care must be taken when performing the analysis of the circuit.  In the circuit of given figure below the voltage source V2 is not connected to the reference node and thus it is a floating voltage source. Here v2 is the node voltage while V2 is the source voltage between node n2 & n3.Circuit with a SupernodeThe part of the circuit enclosed by the dotted ellipse is called a supernode. Kirchhoff’s current law may be applied to a supernode in the same way that it is applied to any other regular node. This is not surprising considering that KCL describes charge conservation which holds in the case of the supernode as it does in the case of a regular node. 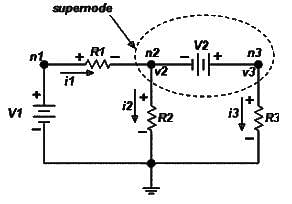 ..……..(14) Example- Nodal Analysis with supernode.Determine the node voltages v1, v2, and v3 of the circuit in Figure below? 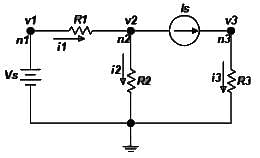 Solution: We have applied the first five steps of the nodal method and now we are ready to apply KCL to the designated nodes. In this example, the current source Is constraints the current i3 such that i3.KCL at node n2 gives…I1 = I2+Is …………….. (1)And with the application of Ohm’s law

……..  (4)MESH ANALYSIS A mesh is defined as a loop which does not contain any other loops The procedure for obtaining the solution is similar to that followed in the Node method and the various steps are given below. 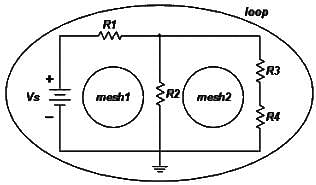 Solution: Our circuit example has three loops but only two meshes as show,the meshes of interest are mesh1 and mesh2.In the next step we will assign mesh currents, define current direction and voltage polarities. The direction of the mesh currents I1 and I2 is defined in the clockwise direction as shown in the next figure.The branch of the circuit containing resistor R2 is shared by the two meshes and thus the branch current (the current flowing through R2) is the difference of the two mesh currents. 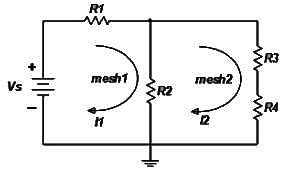 Considering mesh1. For clarity we have separated mesh1 from the circuit in doing this, care must be taken to carry all the information of the shared branches. Here we indicate the direction of mesh current I2 on the shared branch. 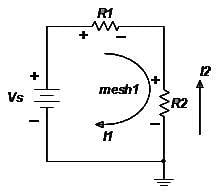 Apply KVL to mesh1. Starting at the upper left corner and proceeding in a clock-wise direction the sum of voltages across all elements encountered isI1R1+ (I1-I2) R2-VS = 0 …………. (1)Similarly, consideration of mesh2 : we have indicated the direction of the mesh current I1 on the shared circuit branch. 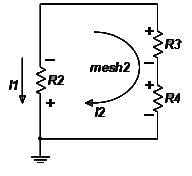 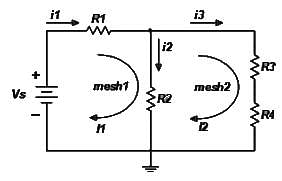 2. If a current source exists between two meshes.(i) The two nodes form a Supermesh.(ii) Use one current variable for both meshes. The current difference between these two meshes is known.

(iii) Apply KVL to the Supermesh.

Example: Find out the unknown mesh current I1? 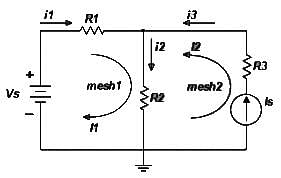 PRACTICE PROBLEMS WITH ANSWERS.Q.1. Determine the currents in the given circuits with reference to the indicated direction?

Q.2.  Determine the currents in the given circuits with reference to the indicated direction? 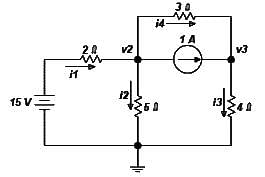