The reactions of haloalkanes may be divided into the following categories: 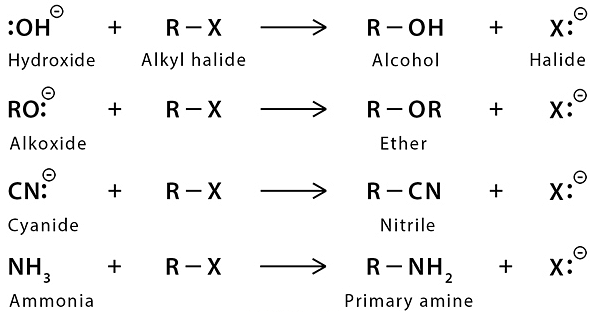 Because of more electronegativity of the halogen atom, it has a partial negative charge and partial positive cha develops on the carbon atom.

There are two important mechanisms for the substitution reaction:

The mechanism of SN2 reaction

Factors affecting the rate of an SN2 reaction

A number of factors affect the relative rate of SN2 reaction, the most important factors are:

1. Effect of the structure of the substrate:

Relative rates of reactions of an alkyl halide in SN2  reaction

2. Concentration and reactivity of the nucleophile 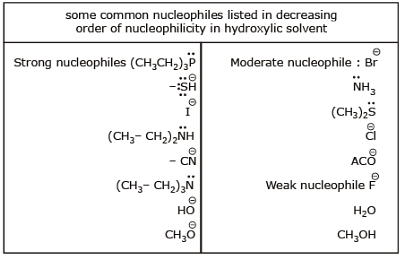 Examples of a polar aprotic solvent.

Other leaving groups are

Sol. CH3-CH2-O! is present in excess and it is stronger nucleophile than Ph - O! so the product is Ph-CH2 - OEt

Factors affecting the rates of SN1

Comparison of SN1 and SN2 reactions :

Question 3:  Predict the compound in each pair that will undergo solvolysis (in aqueous ethanol) more rapidly.

Question 4: Give the solvolysis products expected when each compound is heated in ethanol

Question 5: The rate of SN1 reaction is fastest with

The reaction of RX with aq. KOH

Other Nucleophilic reaction of R - X :-

Reaction of ether with HI :

With moist and dry Ag2O :

Note : (1) In SNi retention of the configuration takes place.

Note : (2) In presence of pyridine above reaction follow the SN2 reaction mechanism.

An increase in the rate of SN reaction due to attack of internal nucleophile is called SNNGP is also known as Anchimeric assistance.

The document Chemical Reaction: Nucleophilic Substitution Reactions Notes | Study Chemistry for JEE - JEE is a part of the JEE Course Chemistry for JEE.
All you need of JEE at this link: JEE
Join Course