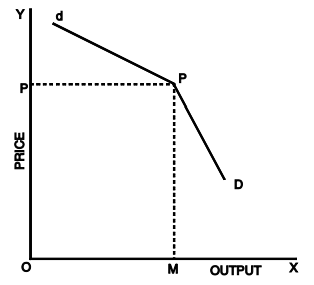 Fig. 32: Kinked Demand Curve under oligopoly The prevailing price level is MP and the firm produces and sells output OM. Now the upper segment dP of the demand curve dD is relatively elastic and the lower segment PD is relatively inelastic. This difference in elasticities is due to the particular competitive reaction pattern assumed by the kinked demand curve hypothesis. This assumed pattern is :Each oligopolist believes that if it lowers the price below the prevailing level its competitors will follow him and will accordingly lower prices, whereas if it raises the price above the prevailing level, its competitors will not follow its increase in price.This is because when an oligopolistic firm lowers the price of its product, its competitors will feel that if they do not follow the price cut, their customers will run away and buy from the firm which has lowered the price. Thus, in order to maintain their customers they will also lower their prices. The lower portion of the demand curve PD is price inelastic showing that very little increase in sales can be obtained by a reduction in price by an oligopolist. On the other hand, if a firm increases the price of its product, there will a substantial reduction in its sales because as a result of the rise in its price, its customers will withdraw from it and go to its competitors which will welcome the new customers and will gain in sales. These happy competitors will have therefore no motivation to match the price rise. The oligopolist who raises its price will lose a great deal and will therefore refrain from increasing price. This behaviour of the oligopolists explains the elastic upper portion of the demand curve (dP) showing a large fall in sales if a producer raises his price. Briefly put, the effect of a price cut on the quantity demanded of the product of an oligopolistic firm depends upon whether its rivals retaliate by cutting their prices. Similarly, the effect of a price increase on the quantity demanded of the oligopolistic firm’s product depends upon whether its rivals respond by raising their prices as well.Each oligopolist will, thus, adhere to the prevailing price seeing no gain in changing it and a kink will be formed at the prevailing price. Thus, rigid or sticky prices are explained by the kinked demand curve theory. Oligopolistic firms often have a strong desire for price stability. Although costs or demand change, oligopolistic firms are reluctant to modify the price set by it.Other important market forms Other important market forms are:Duopoly, a subset of oligopoly, is a market situation in which there are only two firms in the market.Monopsony is a market characterized by a single buyer of a product. or service and is mostly applicable to factor markets in which a single firm is the only buyer of a factor. Oligopsony is a market characterized by a small number of large buyers and is mostly relevant to factor markets.Bilateral monopoly is a market structure in which there is only a single buyer and a single seller i.e. it is a combination of monopoly market and a monopsony market.