Notice in the above example, that the most significant bit (msb) in the negative number −510 is 1, just as in signed binary. The remaining 7 bits of the negative number however are not the same as in signed binary notation. They are just the complement of the remaining 7 bits, and these give the value or magnitude of the number.

The problem with signed the binary arithmetic described in Number system module 1.4  was that it gave the wrong answer when adding positive and negative numbers. Does ones complement notation give better results with negative numbers than signed binary?

This is better than subtraction in signed binary, but it is still not correct. The result should be +210 but the result is +1 (notice that there has also been a carry into the none existent 9th bit).

This is −410 in ones complement notation.

This is −310 in ones complement notation.

There is a way to correct this however. Whenever the ones complement system handles negative numbers, the result is 1 less than it should be, e.g. 1 instead of 2 and −8 instead of −7, but another thing that happens in negative number ones complement calculations is that a carry is ‘left over’ after the most significant bits are added. Instead of just disregarding this carry bit, it can be added to the least significant bit of the result to correct the value. This process is called ‘end around carry’ and corrects for the result -1 effect of the ones complement system.

There are however, still problems with both ones complement and signed binary notation. The ones complement system still has two ways of writing 010 (000000002 = +010 and 111111112= −010); additionally there is a problem with the way positive and negative numbers are written. In any number system, the positive and negative versions of the same number should add to produce zero. As can be seen from Table 1.5.1, adding +45 and −45 in decimal produces a result of zero, but this is not the case in either signed binary or ones complement. 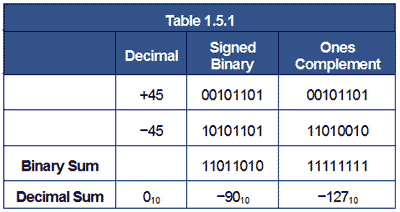 This is not good enough, however there is a system that overcomes this difficulty and allows correct operation using both positive and negative numbers. This is the Twos Complement system.

Twos complement notation solves the problem of the relationship between positive and negative numbers, and achieves accurate results in subtractions.

To perform binary subtraction, the twos complement system uses the technique of complementing the number to be subtracted. In the ones complement system this produced a result that was 1 less than the correct answer, but this could be corrected by using the ‘end around carry’ system. This still left the problem that positive and negative versions of the same number did not produce zero when added together.

The twos complement system overcomes both of these problems by simply adding one to the ones complement version of the number before addition takes place. The process of producing a negative number in Twos Complement Notation is illustrated in Table 1.5.2.

Fig. 1.5.3 Adding a Number to its Twos Complement Produces Zero

This version of −5 now, not only gives the correct answer when used in subtractions but is also the additive inverse of +5 i.e. when added to +5 produces the correct result of 0, as shown in Fig. 1.5.3

Note that in twos complement the (1) carry from the most significant bit is discarded as there is no need for the ‘end around carry’ fix.

With numbers electronically stored in their twos complement form, subtractions can be carried out more easily (and faster) as the microprocessor has simply to add two numbers together using nearly the same circuitry as is used for addition.

Note: When working with twos complement it is important to write numbers in their full 8 bit form, since complementing will change any leading 0 bits into 1 bits, which will be included in any calculation. Also during addition, carry bits can extend into leading 0 bits or sign bits, and this can affect the answer in unexpected ways. 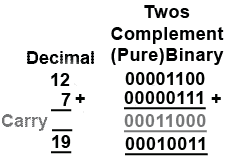 Fig 1.5.4 shows an example of addition using 8 bit twos complement notation. When adding two positive numbers, their the sign bits (msb) will both be 0, so the numbers are written and added as a pure 8-bit binary addition. 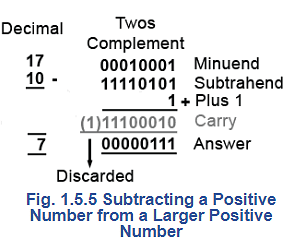 Because the minuend is a positive number its sign bit (msb) is 0 and so it can be written as a pure 8 bit binary number.

The subtrahend is to be subtracted from the minuend and so needs to be complemented (simple ones complement) and 1 added to the least significant bit (lsb) to complete the twos complement and turn +10 into −10.

When these three lines of digits, and any carry 1 bits are added, remembering that in twos complement, any carry from the most significant bit is discarded. The answer (the difference between 17 and 10) is 000001112 = 710 which is correct. Therefore the twos complement method has provided correct subtraction by using only addition and complementing, both operations that can be simply accomplished by digital electronic circuits.

Subtraction with a negative result 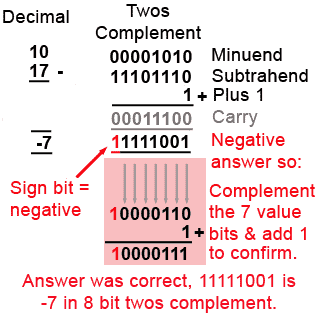 Some subtractions will of course produce an answer with a negative value. In Fig. 1.5.6 the result of subtracting 17 from 10 should −710 but the twos complement answer of 111110012 certainly doesn’t look like −7. However the sign bit is indicating correctly that the answer is negative, so in this case the 7 bits indicating the value of the negative answer need to be 'twos complemented' once more to see the answer in a recognisable form.

When the 7 value bits are complemented and 1 is added to the least significant bit however, like magic, the answer of 100001112 appears, which confirms that the original answer was in fact −7 in 8 bit twos complement form.

It seems then, that twos complement will get the right answer in every situation?

Well guess what − it doesn’t! There are some cases where even twos complement will give a wrong answer. In fact there are four conditions where a wrong answer may crop up:

3. When subtracting a large negative number from a large positive number.

4. When subtracting a large positive number from a large negative number.

The problem seems to be with the word ‘large’. What is large depends on the size of the digital word the microprocessor uses for calculation. As shown in Table 1.5.3, if the microprocessor uses an 8−bit word, the largest positive number that can appear in the problem OR THE RESULT is +12710 and the largest negative number will be −12810. The range of positive values appears to be 1 less than the negative range because 0 is a positive number in twos complement and has only one occurrence (000000002) in the whole range of 25610 values.

With a 16-bit word length the largest positive and negative numbers will be +3276710 and -3276810, but there is still a limit to the largest number that can appear in a single calculation. 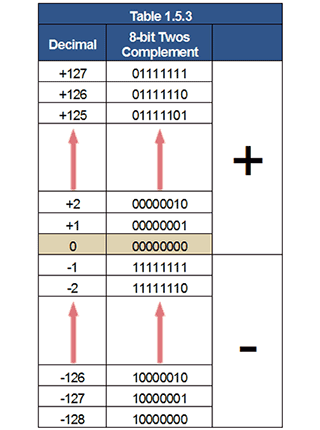 Steps can be taken to accommodate large numbers, by breaking a long binary word down into byte sized sections and carrying out several separate calculations before assembling the final answer. However this doesn’t solve all the cases where errors can occur.

A typical overflow problem that can happen even with single byte numbers is illustrated in Fig. 1.5.7. 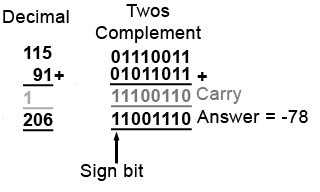 In this example, the two numbers to be added (11510 and 9110) should give a sum of 20610 and at first glance 110011102 looks like the correct answer of 20610,but remember that in the 8 bit twos complement system the most significant bit is the sign of the number, therefore the answer appears to be a negative value and reading just the lower 7 bits gives 10011102 or -7810. Although twos complement negative answers are not easy to read, this is clearly wrong as the result of adding two positive numbers must give a positive answer.

According to the information in Fig 1.5.6, as the answer is negative, complementing the lower 7 bits of 110011102 and adding 1 should reveal the value of the correct answer, but carrying out the complement+1 on these bits and leaving the msb unchanged gives 101100102 which is -5010. This is nothing like the correct answer of 20610 so what has happened?

What has happened is that an overflow has occurred, due to a 1 being carried from bit 6 to bit 7 (the most significant bit, which is of course the sign bit), this changes the sign of the answer. Additionally it changes the value of the answer by 12810 because that would be the value of the msb in pure binary. So the original answer of 7810 has ‘lost’ 12810 to the sign bit. The addition would have been correct if the sign bit had been part of the value, however the calculation was done in twos complement notation and the sign bit is not part of the value.

Of course in real electronic calculations, a single byte overflow situation does not usually cause a problem; computers and calculators can fortunately deal with larger numbers than 12710. They achieve this because the microprocessors used are programmed to carry out the calculation in a number of steps, and although each step must still be carried out in a register having a set word length, e.g. 8 bits or 16 bits, corrective action can also be taken if an overflow situation is detected at any stage.

Microprocessors deal with this problem by using a special register called a status register, flag register or conditions code register, which automatically flags up any problem such as an overflow or a change of sign, that occurs. It also provides other information useful to the programmer, so that whatever problem occurs; corrective action can be taken by software, or in many cases by firmware permanently embedded within the microprocessor to deal with a range of math problems.

Whatever word length the microprocessor is designed to handle however, there must always be a limit to the word length, and so the programmer must be aware of the danger of errors similar to that described in Fig. 1.5.7.

Typical flags for an 8-bit microprocessor are listed below:

Bit 0 (C) (set by arithmetic result) = 1 Carry has been created from result msb.

It seems therefore, that the only math that microprocessors can do is to add together two numbers of a limited value, and to complement binary numbers. Well at a basic level this is true, however there are some additional tricks they can perform, such as shifting all the bits in a binary word left or right, as a partial aid to multiplication or division. However anything more complex must be done by software.

While addition and subtraction can be achieved by adding positive and negative numbers as described above, this does not include the other basic forms of mathematics, multiplication and division. Multiplication in its simplest form can however be achieved by adding a number to itself a number of times, for example, starting with a total of 0, if 5 is added to the total three times the new total will be fifteen (or 5 x 3). Division can also be accomplished by repeatedly subtracting (using add) the divisor from the number to be divided until the remainder is zero, or less than the divisor. Counting the number of subtractions then gives the result, for example if 3 (the divisor) is repeatedly subtracted from 15, after 5 subtractions the remainder will be zero and the count will be 5, indicating that 15 divided by 3 is exactly 5.

There are more efficient methods for carrying out subtraction and division using software, or extra features within some microprocessors and/or the use of embedded maths firmware.