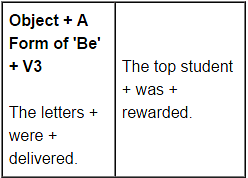 Use of Passive Voice

Note:In a passive sentence, If we want to mention what caused or who did the action, we use the agent (by...........)Active: Charles Dickens wrote many novels.Passive: Many novels were written by Charles Dickens.

Active voice Vs Passive voice , and when do they matter ?

What’s the difference between these two sentences?

He spoke clearly, articulating the points of his plan.

The points of his plan were articulated in his clear speech.

The first sentence is written in the active voice, and the second is written in the passive voice. In the first sentence above, the subject is “he,” and the verb is “spoke.” In the second sentence, the subject is “the points of his plan” and the verb is “were articulated.” When writing in the active voice, the subject of the sentence is performing the action; in the passive voice, the subject of the sentence is the object of an action. Distinguishing between passive and active voices can be tricky, but it’s worth some practice. This is because sometimes, in most competitive exams like NMAT , CAT ,CET ,ETC Sentence Corrections, you will narrow the choices down to two correct answers. Both are grammatically sound, and you end up guessing because you can’t think of any good reason to reject either of them. That’s a frustrating situation, and often the difference between the two answer choices comes down to passive and active voices.

Passive and active voices are troubling for some test-takers, because their application seems to be random; sometimes, the credited answer to a Sentence Correction will be in the passive voice, but other times, a choice will be eliminated for being in the passive voice. How can you tell when it matters and when it doesn’t? Generally speaking,  most EXAMS favors the active voice. Sentences written in the passive voice can still be correct, though, if every other choice has a grammatical flaw. Passive voice should never be used to eliminate an answer in your first glance through the choices. However, if you’ve narrowed the answers down to two grammatically correct options, and the ONLY difference is that one is active and the other is passive, then you can eliminate the passive choice.

Basically, the use of the passive voice isn’t considered an error in NMAT,CAT,CET ,ETC  Sentence Corrections. It’s more of a style issue. It favors concise writing: statements are ideally made as succinctly as possible. The use of the passive voice tends to clutter sentences up, making them lengthier and more complicated than necessary. But if every other choice has definite error—incorrect pronoun usage, subject-verb disagreement, or a misplaced modifier, for instance—a choice using the passive voice can be correct. Let’s look at an example:

According to the manager, his plan could be successfully implemented by all of the company’s branch offices before the end of the fiscal year.

In this Sentence Correction, the sentence as written displays the passive voice, although it is otherwise correct. Each of the other choices has a distinct error: choice B uses “being,” which is virtually never correct ; choice C replaces “the company’s” with “their,” a possessive pronoun with no clear antecedent in the sentence; choice D’s use of the gerund creates a sentence fragment; choice E uses an incorrect idiom. Therefore, the passive construction is correct. However, an active construction would be the preferred style, and that would look like this:

According to the manager, all of the company’s branch offices could successfully implement his plan before the end of the fiscal year.

When it comes to dealing with passive and active voices , think of this style issue as your second line of defense. Real grammatical errors should be the first thing that you address when you’re going through the answers and eliminating them, but in the event of a tie, the use of passive voice can be a tie-breaker. This should help you recognize when the use of passive voice matters to you in choosing an answer, and when it doesn’t.