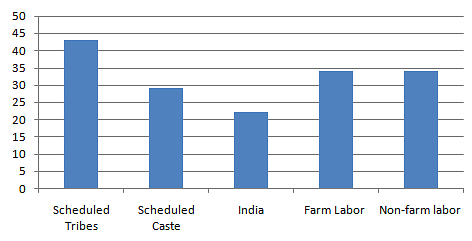 Q.5. Explain any three social indicators through which poverty is looked upon.    [CBSE 2016]Ans: Poverty today is looked upon through social indicators like illiteracy level, lack of access to healthcare, lack of job opportunities etc.(a) People are poor because they are illiterate and they are illiterate because they are poor.(b) Poverty is a situation where sick people cannot afford treatment, i.e., they lack access to healthcare.(c) Poverty also implies the lack of a regular job: at a minimum decent level.

Q.1. Mention any four causes of poverty in India.    [CBSE 2016, 15, 13, 12, 11]ORDiscuss the major reasons for poverty in India.    [CBSE 2016,15,11,10]Ans: There are a number of causes responsible for the widespread poverty in India. Some of them are:(a) Low level of economic development under British rule in India.(b) The decline of the Indian handicrafts industry, which led to unemployment, poverty and misery which were responsible for the low rate of income growth.(c) Social factors like caste system, religious faiths and beliefs also kept a certain section of people in society in poverty.(d) The high growth rate of population led to a very low per capita income in the country.(e) Huge income inequalities due to unequal distribution of land and other resources.Q.2.  What are the main features of the National Rural Employment Guarantee Act, 2005?    [CBSE 2016, 13, 12, 11]Ans: The main features of the National Rural Employment Guarantee Act 2005 are:• The Act assures 100 days of employment every year to every rural household.• One-third of the jobs are reserved for women.• It also aimed at sustainable development to address the cause of drought, deforestation and soil erosion.• The share of SCs, STs and women are 23 per cent, 17 per cent and 53 per cent respectively.• Under this, the average wage has increased from Rs 65 in 2006-07 to Rs 132 in 2013-14.• The scheme provided employment to 220 crores person-days of employment to 4.78 crore households.• In March 2018, the wage rate for unskilled manual workers has been revised again statewide.• The range of wage rates for different states and union territories lies in between Rs 281 per day (for the workers in Haryana) to Rs 168 per day (for the workers in Bihar and Jharkhand).

Q.5. “There is a strong link between economic growth and poverty reduction.” Explain.