Q1. Name any two elements that are used in fabricating solar cells.   [CBSE 2019]

A solar cell is a device that converts solar energy directly into electricity.Construction: The box of the solar cooker is made of non-conducting material e.g., plastic or fibre glass with thick inner walls. These walls are painted in black. A plane mirror is hinged on the top so that it reflects sunlight into the box.Working: The purpose of the box is to increase the effective area for the collection of solar energy.The whole box is covered with glass sheets. These glass sheets prevent the loss of longerwavelength infrared radiation from inside the box to outside.Within two to three hours, the temperature inside rises to about 140 °C. 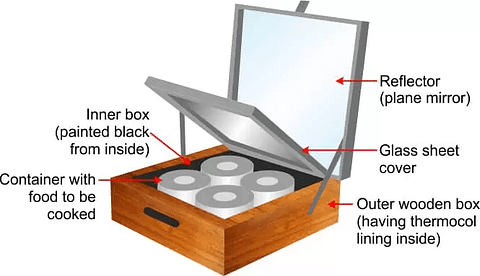 Q3. ‘Bio-gas is an excellent fuel’. List four reasons to justify this statement.Write the main constituent of this gas and state its percentage.   [CBSE 2019]

The four gases commonly present in bio-gas are methane, carbon dioxide, hydrogen and hydrogen sulphide.Main advantages of using bio-gas over fossil fuels are as given below :

Nitrogen and phosphorous are two nutrients present in the spent slurry.

Bio-gas is an excellent fuel because it bums without smoke, leaves no residue ash and its heating capacity is high.

Q6. What is a dam? Why do we seek to build large dams? While building large dams, which three main problems should particularly be addressed to maintain peace among local people? Mention them.   [CBSE 2018]

A dam is a huge construction being done to obstruct the river flow at the place. As a result, a large artificial lake is created there which can be used to store water.We want to build large dams so as to store a large amount of water, which can then be used to produce electricity by means of a hydropower plant. 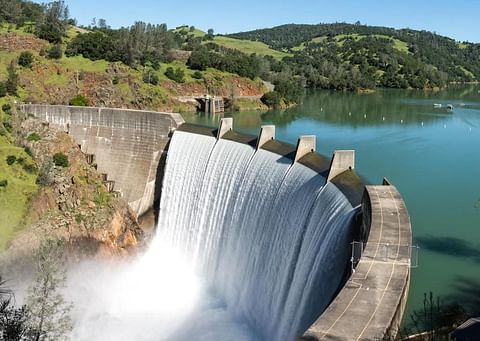 Q7.  Write the energy conversion that takes place in a hydropower plant.   [CBSE 2018]

The energy transformation taking place at hydropower plants is shown below:

Biogas is a mixture of methane, carbon dioxide, hydrogen and hydrogen sulphide.Following are the various steps involved in the biogas plant for obtaining biogas.

Three possible ways to reduce the pollution caused by fossil fuels are :

Tidal energy is the kinetic energy possessed by the rising and falling water in seas and oceans during high and low tides respectively. To harness tidal energy, a dam is constructed across a narrow opening to the sea. The water moves in and out of the openings in the dam during high and low tides. As the water moves through the openings, it flows over the turbines fixed inside the dam that generates electricity. 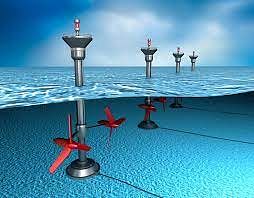 (i) The four gases commonly present in bio-gas are methane, carbon dioxide, hydrogen and hydrogen sulphide.(ii) Main advantages of using bio-gas over fossil fuels are as given below :

Nuclear Fission: The process in which a heavy nucleus (such as uranium, plutonium or thorium) is broken into two nearly equal fragments when bombarded with low-energy neutrons and a tremendous amount of energy is released. This process is called nuclear fission.Steps involved in generating electricity:

Q15. Identify the part of a solar cooker that produces greenhouse effect.   [CBSE 2016]

Q16. What is the minimum wind velocity required for obtaining electric power with a windmill generator?   [CBSE 2016]

(a) Charcoal is a better fuel than wood because it bums without flames is comparatively smokeless and has a higher heat generation efficiency. 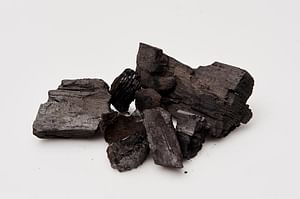 (b) A bio-gas plant helps to reduce the problem of pollution by utilising waste bio-mass by producing bio-gas and manure.

Q19. (a) List in tabular form two major differences between renewable and nonrenewable sources of energy.

(b) Why fossil fuels are classified as non-renewable sources of energy?   [CBSE 2016]

(b) Fossil fuels were formed due to certain very slow changes occurring inside the earth under special circumstances spread over millions of years. Since these conditions are not prevailing now, it is not possible to replenish the amount of fossil fuels being consumed. Hence, these are classified as non-renewable sources of energy.

Three main limitations of harnessing nuclear energy are as follows :

Q21. How is nuclear energy generated? State in brief the process of utilising this energy in the production of electricity. Mention the major hazard of nuclear power generation.   [CBSE 2016]

Nuclear energy is generated by the process of nuclear fission. The nucleus of a heavy atom such as uranium or plutonium, when bombarded with low energy neutrons, can be split apart into two lighter nuclei along with the release of tremendous amount of energy.We design a nuclear reactor in which process of nuclear fission takes place at a sustained rate and energy is released at a uniform rate. This energy is utilised to convert water into steam, which then does work for rotating the turbine of electric generator. As a result, electricity is produced.The major hazard of nuclear power generation is the storage and safe disposal of spent or used fuel so that no environmental contamination takes places.

In a nuclear fission reaction large amount of energy is released by a small quantity of nuclear fuel, which can be easily converted into electrical energy.

Wind is caused by unequal heating of landmass and water bodies by solar radiation.

Splitting up of a nucleus of uranium, when bombarded by neutrons, into two lighter nuclei along with release of a large amount of energy is called nuclear fission.

A hydropower plant converts the potential energy of stored water into electricity.To produce hydropower electricity, a high rise dam is constructed at a suitable place on the river to obstruct the flow of water and thereby collect water in a large-sized reservoir. Due to the rise of the water level, the kinetic energy of flowing water is transformed into the potential energy of stored water.The water from the high level in the dam is carried through sluice gates and pipes to the turbine of the electric generator, which is fitted at the bottom of the dam. Due to flowing water, the turbine is rotated at a fast rate and electricity is produced. 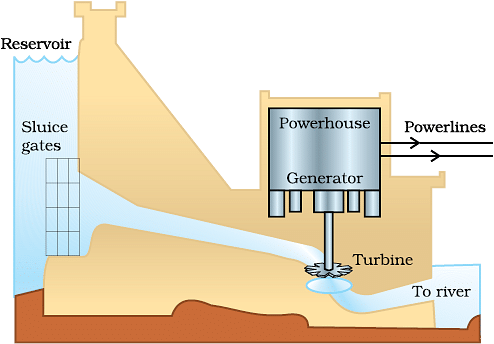 (a) Tidal energy: The energy produced by the surge of ocean water during high and low tides due to difference in sea-levels is called tidal energy. The high and low tides occur due to the gravitational puli of the moon. This causes enormous movement of water.(b) Tidal energy is harnessed by constructing a dam near the shores. During high tides water flows into the dam and during low tides, water flows out. This flowing water rotates the turbine, present at the opening of dam and produces electricity.Limitation of the use of tidal energy:

Solar energy manifests itself in many forms through many processes both biological and physical. Plants utilise solar energy for photosynthesis. The solar energy trapped by land and water bodies brings about many physical changes resulting in wind, storm, ocean waves etc. Also fossil fuels e.g., coal, natural gas, petrol etc., have been formed due to very slow changes which occurred millions of years ago and were related to solar energy.The energy of bio-gas etc. is also derived from solar energy.

(i) Two ways to reduce air pollution caused due to vehicles are as follows:

(ii) Two harmful effects, other than air pollution, caused due to burning of fossil fuels are as follows:

The document Previous Year Questions: Sources of Energy - Notes | Study Science Class 10 - Class 10 is a part of the Class 10 Course Science Class 10.
All you need of Class 10 at this link: Class 10
Attempt Now
Join Course