Suppose only one co-ordinate, qi ( 1 ≤i ≤n) i 1 is given a small, imaginary displacement, . δ qi As a result every particle in the system will be, in general, displaced a certain amount. The virtual work done will be of the form δW = Qiδqi where Qi is an expression relating directly to the forces acting on the system. Qi is the generalised force associated with qi .

From the principle of virtual work

Since, δqi is finite, we get

The generalised forces have component parts

(Noting, as before, that the constraint forces do no virtual work)

Then the equations of motion are:

These are the n equations of motion

We will examine each of these components now, in more detail. The aim is to relate these component forces to the generalised co-ordinates q1,q2...qn.

represented in terms of generalised co-ordinates by δq1 δq2 δqn , ,..., . The virtual displacement of the Ithparticle can be represented by

(note that this is a scalar product). From this result we get the total virtual work as

Using equation (1) we have

However, the generalised inertial forces, Qj, are effectively defined by

It is shown in the handout notes that

where T is the total KE

Suppose we define the POTENTIAL ENERGY, V, as the work done by the external force to extend the spring a distance χ 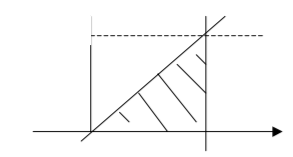 The work done by the internal spring force, W, is equal and opposite to V

Now consider a small, virtual displacement, δx . Corresponding changes to W and V are as follows:

Suppose that no damping forces are present, and there are no externally applied forces. Then

We have found that

If we collect these results we get

This is LAGRANGE’s EQUATION

And assume that V does not depend on the qi & ’s, then Lagrange’s equation can be written as: 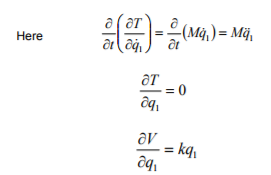 This is a single degree of freedom system. Here

The Lagrange equation is (n=1 so only one equation)