In the preceding chapters,we have already derived expressions for discrete as well as continuous time convolution operations.

We shall now discuss the important properties of convolution for LTI systems.

Proof : We know that

∴The above expression can be written as

So it is clear from the derived expression that

Thus we proved that convolution is commutative in both discrete and continuous variables.

By this property we mean that convolution isdistributive over addition. 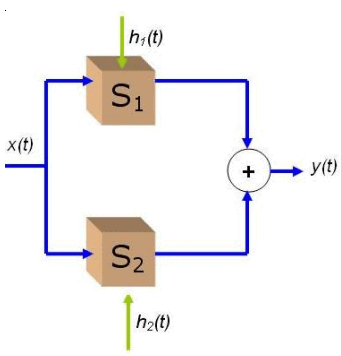 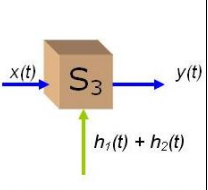 Proof : We know that

Making the substitutions: p = k ; q = (l - k) and comparing the two equations makes our proof complete.Note: As k and l go -∞ from to +∞  independently of each other, so do p and q, however p depends on k, and q depends on l and k.

The Jacobian for the above transformation is

Doing some further algebra helps us see equation (2) transforming into equation (1) ,i.e. essentially they are the same. The limits are also the same. Thus the proof is complete.

This property (Associativity) makes the representation y[n] = x[n]*h[n] *g[n] unambiguous. From this property, we can conclude that the effective impulse response of acascaded LTI system is given by the convolution of their individual impulse responses. 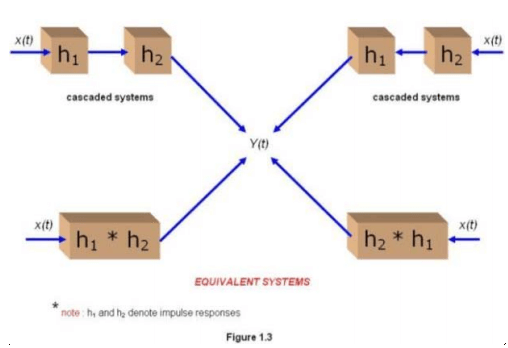 Consequently the unit impulse response of a cascaded LTI system is independent of the order in which the individual LTI systems are connected. Note :All the above three properties are certainly obeyed by LTI systemsbuthold for non-LTI systems in, as seen from the following example: 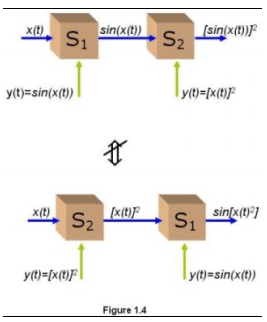 4) LTI systems and Memory Recall that a system is memoryless if its output depends on the current input only. From the expression :

A system is said to be invertible if there exists an inverse system which when connected in series with the original system produces an output identical to the input.

In order for a discrete LTI system to be causal, y[n] must not depend on x[k] for k > n. For this to be true h[n-k]'s corresponding to the x[k]'s for k > n must be zero. This then requires the impulse response of a causal discrete time LTI system satisfy the following conditions :

Essentially the system output depends only on the past and the present values of the input.

Now we take a signal defined as

This signal is zero elsewhere. Therefore we get the following result :

We have come to the result that y[0] ≠ 0, for the above assumption. ∴ our assumption stands void. So we conclude that y[n] cannot be independent of x[k] unless h[k] = 0 for k < 0

Note : Here we ensured a non-zero summation by choosing x[n-k]'s as conjugate of h[k]'s.

In order for a continuous LTI system to be causal, y(t) must not depend on x(v) for v > t . For this to be true h(t-v)’s corresponding to the x(v)’s for v > t must be zero. This then requires the impulse response of a causal continuous time LTI system satisfy the following conditions :

As stated before in the discrete time analysis,the system output depends only on the past and the present values of the input.Proof : ( By contradiction ) 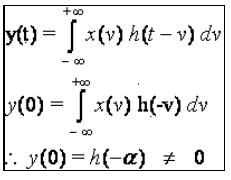 A system is said to be stable if its impulse response satisfies the following criterion :

But since the system is stable

which in turn implies that

. Hence if y[n] is bounded then the condition