The document Random Processes & Variables GATE Notes | EduRev is a part of the GATE Course Communication System.
All you need of GATE at this link: GATE

In this article, you will find the Study Notes on Random Processes & Variables which will cover the topics such as Introduction to Random Process and variables, Mean Function, Auto-correlation function, Properties of Auto Correction Function, Stationary Process, Power and Energy of Random Signal, Cross-Correlation, Random Processes and Linear Systems, Power Spectral Density.

Introduction to Random Process and variables:

Types of classes of signals in deterministic signals:

The mean function of a random process is the expected value of the process. 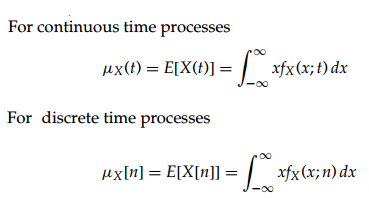 A process whose statistical properties are independent of a choice of time origin is called as a stationary process.

Power and Energy of Random Signal:

Power content of a random signal X is given by

For the case of stationary processes, only power type process is of theoretical and practical interest.