Delocalisation of p-electrons in conjugation is known as resonance.

1. Molecule should be planar, nearly planar or a part of it is planar

Q.1 Which are planar?

Because all carbon atoms are sp2 hybridised.

1. Resonance takes place due to delocalization of p e-s.

2. Position of the atoms remains the same, only delocalization of p e-s takes place.

Note:- [They are not resonating structure rather they are tautomers].

4. In Resonance No. of unpaired e-s remains the same.

(They are not resonating structure)

(3) All R. S. contribute towards the formation of resonance hybrid (Their contribution may be different).

(4) A single R. S. can't explain each & every property of that particular compound.

It is a real structure which explains all the properties of a compound formed by the contribution of different R. S.. It has got maximum stability as compared to R. S.

It is the difference b/w theoretical value of H.O.H & experimental value.

* More the resonance energy, more stable will be the molecule.

* Cyclohexane is thermodynamically more stable than benzene, even though resonance energy of benzene is more.

* Resonance energy is a absolute term.

* If double bond is participating in resonance then it will acquire partial single bond character as a result of which bond length increase & bond strength decreases.

If a single bond is involved in resonance then it will acquire partial double bond character. As a result of which bond length decreases & bond strength increase.

Permanent polarisation caused by displacement of s-electrons into p-molecular orbital is known as hyperconjugation.

* More the C - H bond, more will be the no bond resonating structure (Hyper conjugation)

More the (C - H) bond, more will be the stability of free radical.

1. It is a neutral species.

2. It has one un-paired electron that's why paramagnetic in nature.

3. Its hydridisation is sp2 and triangular planar shape.

Note : unpaired electron is not counted while calculating the hybridisation state.

Its stability can be determined with the help of hyperconjugation as well as Resonance effect.

(Free Radical is on next carbon to doubly bonded carbon atoms)

* More Resonating structure, more will be the stability of the free Radical.

No. of Resonating structures = 7

No. of Resonating structures = 10

Ex.1 Compare the stability of the following free Radicals

(Therefore this resonating structure is not possible)

Compare the  bond energy of the above compounds.

Sol. After forming free radical from the compound 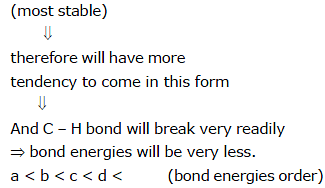 Ex.3 Compare the potential energy of the following compounds (above compounds)

Sol. If compound after being in free Radical form is very stable (i.e., less energy) it means it would have possessed more energy initially i.e. its potential energy will be the most.

Stability order of free Radical that might be formed after removal of H (Homolytically) from the given carbon.

In the above compound compare 2° benzylic allylic stability at two given positions:

while drawing the resonating structure of the above,

→ Therefore extra stable than  which have only two (C - H) bond for Hyper conjugation.

Ex.5 Compare the stability of the following free Radical 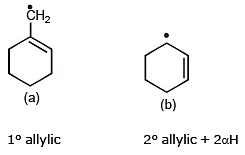 Sol. After making free Radical of the above compounds: