What is Heat Transfer?

The movement of heat across the border of the system due to a difference in temperature between the system and its surroundings.

Interestingly, the difference in temperature is said to be a ‘potential’ that causes the transfer of heat from one point to another. Besides, heat is also known as flux.

How is Heat Transferred?

Heat can travel from one place to another in several ways. The different modes of heat transfer include:

Meanwhile, if the temperature difference exists between the two systems, heat will find a way to transfer from the higher to the lower system. 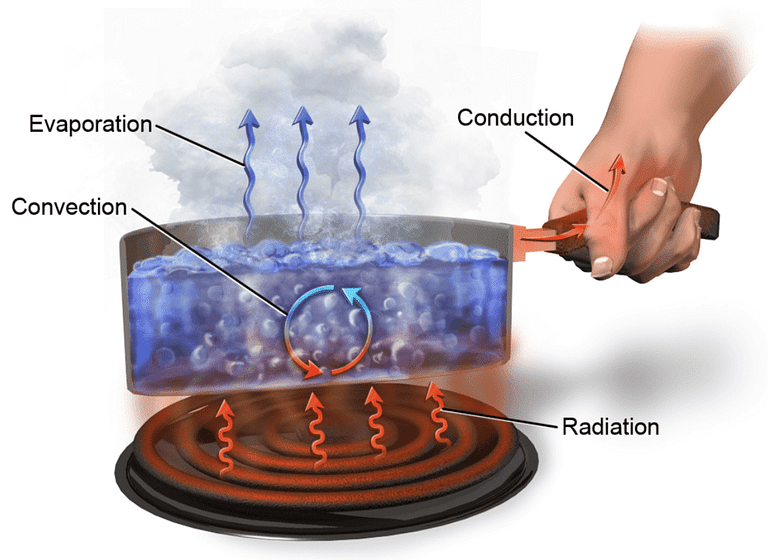 Following are the examples of conduction:

The coefficient of thermal conductivity shows that a metal body conducts heat better when it comes to conduction. The rate of conduction can be calculated by the following equation:

Examples of convection include:

As the temperature of the liquid increases, the liquid’s volume also has to increase by the same factor and this effect is known as displacement. The equation to calculate the rate of convection is as follows:

It is defined as that mode of transmission of heat in which heat travels from hot body to cold body in straight lines without heating the intervening medium.

Following are the examples of radiation:

As temperature rises, the wavelengths in the spectra of the radiation emitted decreases and shorter wavelengths radiations are emitted. Thermal radiation can be calculated by Stefan-Boltzmann law:

Try yourself:When water is kept in a very hot pan, the entire water heats up. Which mode of heat transfer is responsible for this?
Explanation
View Solution

What is Thermal Conductivity?

Thermal conductivity refers to the ability of a given material to conduct/transfer heat. It is generally denoted by the symbol ‘k’ but can also be denoted by ‘λ’ and ‘κ’.

The thermal conductivity of a material is described by the following formula: K = (QL)/(AΔT)

The coefficient of thermal conductivity of the material of a rod is defined as the heat current (amount of heat flowing per second) flowing per unit area between two cross-section of the rod each of area 1 m2 and separated 1 m apart.

Rate of flow of heat = dQ/dt

Heat current, through a conducting rod, is defined as the amount of heat conducted across any cross-section of the rod in one second.

H depends upon the following factors:

It is defined as the rate of change of temperature of the different cross-section with distance.

It is defined as heat current per unit temperature difference.

The thermal resistance, of a conductor, is defined as the temperature difference between its two cross-sections when a unit heat current flows through it.

Reciprocal thermal conductance is known as the thermal resistance of the substance.

Thermal resistance of a conductor of length d:  RTH = d/KA

Flow of heat through a composite slab

A bolometer is a device for measuring the power of incident electromagnetic radiation via the heating of a material with a temperature-dependent electrical resistance.

If Rt and R0 are the resistances of the conductor at 0ºC and tºC, then, Rt = R0(1+αt), Here α is the temperature coefficient of change of resistance with temperature.

Absorptive power (a) of the substance is defined as the ratio between amounts of heat absorbed by it to the total amount of heat incident upon it.

Transmitting power (t) of a substance is defined as the ratio between the amount of heat transmitted by the body to the total amount of heat incident upon it.

Radiant emittance of a body at a temperature T is defined as the total amount of energy (for all wavelengths) radiated per unit time, per unit area by the body.

Total energy density (U) at any point is defined as the radiant energy per unit volume, around that point, for wave-lengths taken together.

It states that at any temperature, the ratio of emissive power eλ of a body to its absorptive power aλ, for a particular wave-length, is always constant and is equal to the emissive power of perfect black body for that wavelength.

This implies the ratio between eλ and aλ for anybody is a constant quantity (= Eλ). 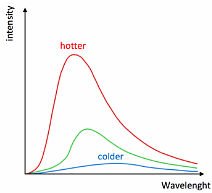 It states that wavelength of radiation which is emitted with maximum intensity varies inversely as the absolute temperature of the body.λm×T = Constant

Radiant emittance or the energy radiated per second per unit area by a perfect black body varies directly as the fourth power of its absolute temperature.

Spectral emissive power is defined as the rate at which radiation of wavelength l is emitted in all directions form a surface per unit wavelength dl about l.

Emissivity is defined as the ratio of the energy radiated from a material's surface to that radiated from a a perfect emitter, known as a blackbody, at the same temperature and wavelength and under the same viewing conditions.

It states that the rate of loss of heat of a body is directly proportional to the temperature difference between the body and surroundings.dQ/dt = -K(T-T0) or (T-T0) ∝ e-KT

Wien's displacement law states that the black body radiation curve for different temperatures peaks at a wavelength inversely proportional to the temperature.

Solar constant, the total radiation energy received from the Sun per unit of time per unit of area on a theoretical surface perpendicular to the Sun’s rays and at Earth’s mean distance from the Sun.

The rate of cooling of water increases with a fall in temperature. 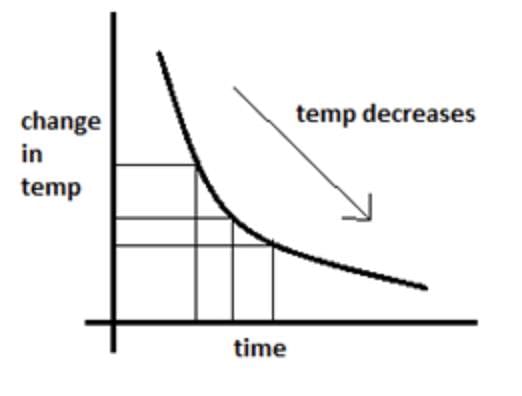