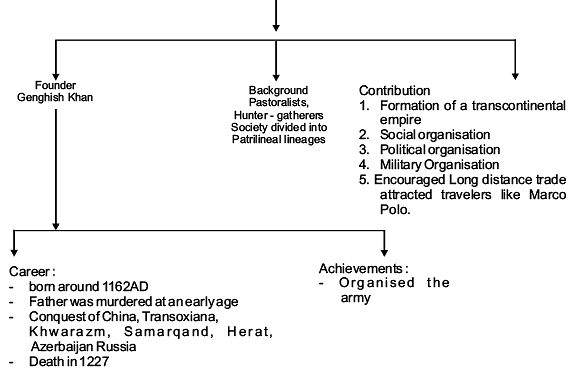 After decades of Soviet control, the country of Mongolia is recreating its identity as an independent nation . Genghis Khan appeared as an iconic figure for the Mongol People, mobilising memories of a great past in the forging of national identity that can carry the nation into the future.British Empire, Mauryan Empire, Mughal Empire- Comparison with the Mongol Empire.- Mongols Provided idelogical models for the Mughals of India.

- Timur, another monarch who aspired to universal domination, hesitated to declare himself monarch because of Genghis Khan.

All the able - bodied, adult males of the tribe bore arms. The society included groups like the Turkic Uighurs, the defeated people like - the Kereyits. It was a body of heterogenous mass of people.

Genghis khan assigned the responsibility of governing the newly conquered people to his foursons. Genghis Khan envisaged that his sons would rule the empire collectively. The numbers of the family was underlined at the assembly of chieftains, quriltais, where all decisions relating to the family or the state for the forthcoming season - Campaigns, distribution of plunder, Pasture lands and succession were collectively taken.

His army was organised according to the old steppe system ofdecimal units : in divisions of 10s, 100s, 1000s and 10,000 soldiers. He divided the old tribal groupings and distributed their members into new military units. Any individual who tried to move from his / her alloted group without permission received harsh punishment. The largest unit of soldiers, approximating 10,000 soldiers. The new military contingents were required, to serve under his four sons and specially chosen captains of his army units called noyan.

Barbarian : The term 'barbarian' is derived from the greek barbaros which meant a non greek, whose language sounded like a random noise: 'bar-bar'. Cruel, greed and politically unable to govern.Yasa : Genghis Khan's code of Law.Tama : The military contingents of the individual princes.Quriltais : The assembly of chieftains where all decisions relating to the family or the state - campaings, distribution of plunder, pasture lands and succession - were collectively taken.Anda : blood brothers of Genghis Khan.Naukar : Special ranking as his bondsmen, a title that marked their close relationship with their mster.Qanats :  Underground canals.Yam : A Couriersystem introduced by Genghis KhanQubcurtax : A levy that the nomads paid willingly for the multiple benefits that it brought.