2. Situationism is a view which states that situations and circumstances in which one isplaced to influence one’s behaviour. [EXTERNAL FACTORS]\

3. The situationist perspective views human behaviour relatively more as a result of influence of external (situational) factors than personality traits.

• Some Domains of Psychological Attributes

(i) Operation: what the respondent does, e.g., cognition, memory retention.(ii) Contents: the nature of materials or information on which intellectual

(iii) Products: the form in which information is processed by the respondent, e.g., relations, systems, transformations.

(i) Linguistic: The capacity to use language fluently and flexibly to express one’s thinking and understand other. Persons high on this ‘word-smart’, eigi, poets and writers.

(iv) Musical: The capacity to produce, create and manipulate musical rhythms and patterns.

(v) Bodily-Kinaesthetic: The use of the whole body or portions of it creatively andflexibly for display, construction of products and problem solving, eigi, athletes, dancers, actors. .

(vi) Interpersonal: Skill of an individual to understand the needs, motives feelings and behaviours of other people for better understanding and relationship. High among psychologists counsellors politicians.

(vii) INTRA PERSONAL: Refers to the awareness of one’s own feelings, motives, desires, knowledge of one’s internal strengths and limitations and using that knowledge to effectively relate to others, eigi, philosophers.

(a) Knowledge Acquisition—responsible for learning and acquisition of the ways of doing things.

(b) Meta or Higher Order Component—planning concerning what to do and how to do it.

— Ability to integrate different experiences in an original way to make new discoveries and inventions.

— Quickly find out what information is crucial in a given situation.

(iii) Contextual/Practical Intelligence: The ability to deal with environmental demands encountered on a daily basis—

— may be called ‘street smartness’ or ‘business sense’— easily adapt to their present environment/select a more favourable environment, modify the environment to fit their needs.

— Arousal and attention enable a person to process information.— An optimal level of arousal focuses our attention to the relevant aspects of a problem.— Too much or too little arousal would interfere with attention and attend to stimuli.

— Simultaneous: Perceive the relations among various concepts and integrate – them into a meaningful pattern for comprehension, e.g., RSPM.— Successive: Remember all the information serially so that the recall of one leads to the recall of another, e.g., learning of digits, letters. .

— Allows us to think of the possible courses of action, implement them to reach a target, and evaluate their effectiveness.— If a plan does not work, it is modified to suit the requirements of the task or situation.

The evidence for hereditary influences on intelligence comes mainly from studies on twins and adopted children.

1. Environmental deprivation lowers intelligence while rich nutrition, good family background, and quality schooling increases intelligence.2. There is a general consensus among psychologists that intelligence is a product of complex interaction of heredity (nature) and environment (nurture).3. Heredity sets a range within which an individual’s development is actually shaped by the support and opportunities of the environment.

1905: Alfred Binet and Theodore Simon made the first successful attempt to formally measure intelligence.1908: Gave the concepts of Mental Age (MA) is the measure of a person’s intellectual development relative to people of her/his age-group.Chronological Age (CA) is the biological age from birth.Retardation was being two mental age years below the chronological age.1912: William Stern, a German psychologist, devised the concept of Intelligence Quotient (IQ). IQ refers to ratio between MA and CA. Formula—mental age divided by chronological age, and multiplied by 100 (to avoid the decimal point).

The American Association on Mental Deficiency (AAMD) views mental retardation as significantly sub-average general intellectual functioning existing concurrently with deficits in adaptive behaviour and manifested during the developmental period.In order to be judged as mentally retarded, a person must show:

(i) Significantly sub average intellectual functioning, e.g., IQ below 70.(ii) Deficits in adaptive behaviour or the capacity to be independent and deal effectively with one’s environment.

Deficits must be observed during the developmental period, i.e., between 0-18 years.

Mild retardation—development is typically slower than that of their peers but they can function quite independently, hold jobs and families. Level of retardation increases—lag behind their peers in language and motor skills, need to be trained in self-care skills and simple social and communication skills.

2. Intellectual Giftedness:Lewis Term an (1925): Study to show how intelligence was related to occupational success and life adjustment. These individual show higher performance because of their outstanding potentialities.Giftedness is exceptional general ability shown in superior performance in a wide variety of areas.

Talent refers to remarkable ability in a specific field, e.g., social, and are often called prodigies.Types of Intelligence Tests,Individual or Group Test 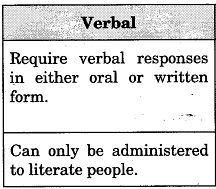 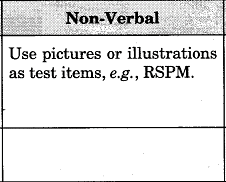 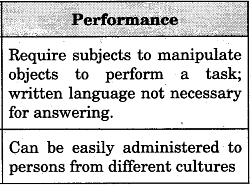 CULTURE AND INTELLIGENCEA major characteristic of intelligence is that it helps individuals to adapt to their environment. The cultural environment provides a context for intelligence to develop. ‘Culture is a collective system of customs, beliefs, attitudes and achievements in art and literature.Sternberg: 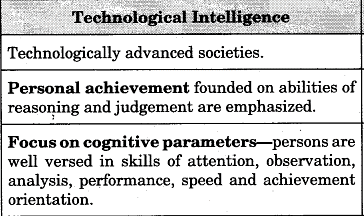 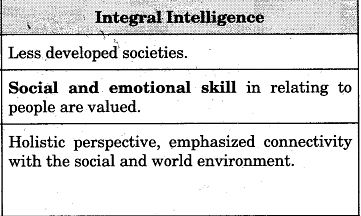