There were many social reformers who wanted to change the life of the depressed class and few social evils.

Difference between social change and movement

1. In an country, social movements aims at changing some aspect of society.

2. According to Emile Durkheim, social movement can lead to disintegration/disorder of society. Society is more important than individual.

3. Social movements usually aim at improving the life of depressed class and sociology is the study of society.

(i) Feels resentful (unhappy with situation)

(ii) Has a psychological factor which convinces them that they are deprived.

Reformist Movement is a movement where the reformers try to change the mindset of the people regarding a particular issue.

Revolutionary Movement is a movement where radical or violent methods are used to bring about change in society. (Could use weapons),

Redemptive Movement is formed to reduce actions done in the past. It lies to change the thinking of the people. 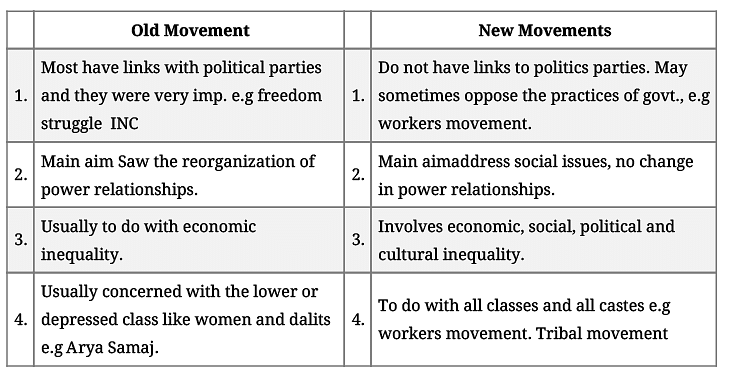 Chipko Movement - is a movement which was not ordy economic aspect, it affected all aspect.

Reason being they were dependent on the forest for their livelihood (grazing,fodder, firewood, food and gathering).

1. Pre-Colonial: There were movements, but they were not localised so we did not know about them as peasants were too scared to form their own movements. They were poor and could not mobilise people.

(i) 19th Century - Some revolts did become quite popular.

(ii) Bengal Revolt - Indigo plantations by Gandhi during 1917 - 1920 when he came back from South Africa he traveled all across India helping people.

There were 2 important movements.

1920 there were a lot of revolts to do with forest.

There was inflation and protests

They are different from other movements as they were fighting for self-respect and dignity.