The document Sample Paper 1 with Solution - Term- 1 Science, Class 7 Class 7 Notes | EduRev is a part of the Class 7 Course Science Class 7.
All you need of Class 7 at this link: Class 7

Ques 1: Grass eaten by ruminants is stored in the    (1 marks) (A) Rumen (B) Liver (C) Gall bladder (D) OesophagusAns: ASol: Grass eaten by ruminants is stored in the rumen. The rumen contains cellulose-digesting bacteria which digest the carbohydrate cellulose present in grass.Ques 2: Which type of relationship is seen in algae and fungi in lichens?     (1 marks) (A) Predator–prey (B) Parasitic (C) Saprophytic (D) SymbioticAns: DSol: Lichen is a symbiotic association between algae and fungi wherein both the organisms are mutually benefited from each other. The alga provides food to the fungus, and the fungus, in turn, provides shelter to the alga.

(A) Female laying eggs (B) Pupa stage (C) Cocoon stage (D) Adult stageAns: A Sol: The picture shows a female silk moth laying eggs. A female lays hundreds of eggs at a time.Ques 7: Which microorganism is responsible for the fatal blood disease called sorter's disease?    (1 marks) (A) Virus, Anthrax (B) Algae, Anthrax (C) Bacteria, Anthrax (D) Animal, AnthraxAns: CSol: Sorters are the people who separate the fleece of sheep into fibres of different quality. The bacterium anthrax causes a fatal blood disease called sorter's disease.Ques 8: Which of the following bases is used as a cleansing agent?     (1 marks) (A) Magnesium hydroxide (B) Calcium hydroxide (C) Sodium hydroxide(D) Ammonium hydroxideAns: DSol: Ammonium hydroxide is used as a cleansing agent.Ques 9: Which of the following substances helps in reducing the irritation caused by the sting of an ant?     (1 marks) (A) Vinegar (B) Lemon juice (C) Calamine (zinc carbonate) (D) Orange juiceAns: CSol: Calamine (zinc carbonate) being a basic substance can neutralise the effect of acid present in the ant sting.Ques 10: What will happen if a solution of baking soda is put on turmeric paper?     (1 marks)(A) The colour of turmeric paper changes from yellow to blue.(B) The colour of turmeric paper changes from yellow to green.(C) The colour of turmeric paper changes from yellow to red.(D) The colour of turmeric paper changes from yellow to magenta.Ans: CSol: Baking soda is a basic substance and thus changes the colour of yellow turmeric paper to red.Ques 11: The trapped air under the feathers of a bird:     (1 marks) (A) Reduces heat transfer through conduction (B) Increases heat transfer through conduction (C) Stops heat transfer by conduction (D) Does not affect heat transfer through conductionAns: ASol: It reduces heat transfer through conduction.Ques 12: The vacuum present in a vacuum flask reduces heat transfer by _______.     (1 marks) (A) Convection (B) Radiation (C) Conduction and convection (D) ConductionAns: C
Sol: Conduction and convectionQues 13: The base/fundamental unit of time is     (1 marks)(A) Minute(B) Second(C) Hour(D) YearAns: BSol: The base/fundamental unit of time is second.Ques 14: Average speed = _______      (1 marks) (A) Half distance travelled/time (B) Half distance travelled × time (C) Total distance travelled/total time (D) Total distance travelled × total timeAns: CSol: Average speed = Total distance travelled/total timeQues 15: A car moves with a speed of 40 km/h for 15 minutes, and then with a speed of 60 km/h for the next 15 minutes. The total distance covered by the car is     (1 marks) (A) 100 km (B) 25 km (C) 15 km (D) 10 kmAns: BSol: Distance covered in first 15 minutes =

Ques 16: How are nutrients replenished in the soil?     (2 marks)Ans: Nutrients are replenished in the soil by two ways:(i) Addition of fertilisers and manures: Fertilisers and manures contain plant nutrients such as nitrogen, phosphorus, potassium etc. So, when fertilisers and manures are added to the soil in the field, the soil gets enriched with the necessary nutrients.(ii) Growth of leguminous crops: The leguminous plants harbour nitrogen-fixing bacteria (Rhizobium) in their root nodules. These bacteria convert nitrogen into nitrogenous compounds which get mixed with the soil.Ques 17: How do earthworms increase soil fertility?     (2 marks)Ans: Earthworms ingest soil, digest the organic matter present in it and excrete soil full of plant nutrients known as worm cast which makes the soil fertile. They make burrows inside the soil and thereby aerate it. Fig: Earth Worms
Ques 18: (i) What is the purpose of scouring the sheared skin obtained from sheep?(ii) How is it done?   (2 marks)Ans: (i) Scouring the sheared skin obtained from sheep helps to remove grease, dust and dirt from the fleece of sheep.(ii) Scouring is done by thoroughly washing the sheared skin and hair in a soap solution and a lot of water to remove all the dirt. It can be done by hands or by machines.Ques 19: Name the base present in milk of magnesia. What is it used for?    (2 marks)Ans: Magnesium hydroxide is the base present in milk of magnesia. It is used to neutralise the excess acid present in stomach and is hence used as an antacid.Ques 20: What is an antacid? How does an antacid work?     (2 marks)Ans: Antacids are a group of mild bases which have no toxic effects on the body and are used to cure indigestion. Being basic in nature, antacids react with excess acid in the stomach and neutralise it.Ques 21: Your car moves with a speed of 40 km/h for 10 minutes, and then with a speed of 60 km/h for the next 15 minutes. What is the total distance covered by the car?     (2 marks)Ans: Distance covered in first 10 min = 40 * (10/60) km = 20/3 kmDistance covered in second 15 min = 60 * (15/60) km = 15 kmTotal distance = (20/3) + 15 = 65/3 = 21.66 kmQues 22: A body moves along a path. Its distance–time graph is shown below. How much distance will it cover in 6 hours?    (2 marks) 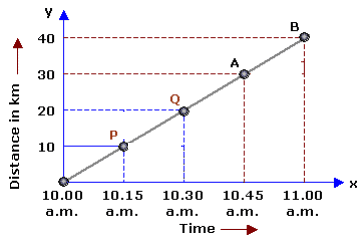 (ii) Rats and snakes avoid the high temperature of the day by residing in burrows during the day time and become active at night. They remain inactive and show lowered metabolic rate in response to high temperature and arid conditions (undergo aestivation).Ques 24: (i) Which soil horizon/section has the highest mineral content and why?(ii) How is soil important for plant growth?     (4 marks) Ans: (i) The B-horizon of the soil has the highest mineral content, because when rainwater seeps through the topsoil, it dissolves minerals and deposits them in this layer.(ii) Soil is important for plant growth because

Ques 25: (i) Why do muscle cells respire anaerobically?  (ii) Why do muscle cramps arise after heavy physical exercise?    (4 marks)Ans: (i) Our muscle cells respire anaerobically for a short period of time whenever there is a temporary deficiency of oxygen. When we do heavy physical exercise for several hours or do heavy weightlifting, the demand for energy increases. However, the supply of oxygen to produce the required energy is limited. So, anaerobic respiration takes places in the muscle cells to fulfil the increased energy demands of the body.(ii) Muscle cramps occur when muscle cells respire anaerobically. The partial breakdown of glucose produces lactic acid. The accumulation of lactic acid causes muscle cramps.Ques 26: Give reasons for the following:    (4 marks)(i) Wool burns with a bad smell. (ii) Wool is used for making winter clothing. (iii) The quality of wool depends on the breed of sheep. (iv) Shearing does not cause any pain to the sheep.Ans:
(i) Wool is a proteinaceous fibre and hence burns with a bad smell.(ii) Wool fibre is extremely porous. The air in the pores acts as an insulator and does not allow the body heat to escape. Hence, wool is used for making winter clothing.(iii) The quality of wool is judged on the basis of its thickness, length, shine, strength and colour of the fibre, which in turn, depends on the breed of sheep.(iv) In shearing, the hair of sheep along with a thin layer of skin called fleece is removed from the body of sheep. Shearing does not cause any pain to the sheep because the uppermost thin layer of their skin is dead.Ques 27: (i) Define sericulture.(ii) What is a cocoon?(iii) Explain the process of obtaining silk thread from the cocoon.     (4 marks)Ans: (i) The process of rearing of silkworms for obtaining silk is called sericulture.(ii) The covering of silk fibres inside which the caterpillar covers itself is called a cocoon.(iii) The cocoons of silk moth are used to obtain silk fibres. The cocoons are kept under the Sun or boiled or exposed to steam. The silk fibres are then separated out. This process of separating the silk fibres from the cocoon is called reeling. 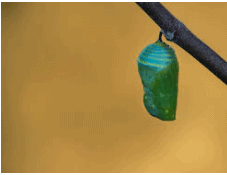 Ques 29: (i) An iron ball at 40°C is dropped in a mug containing water at 40°C. What will be the passage of flow of heat in the system? Explain. (ii) How does heat flow in a body having one end cool and the other at high temperature?    (4 marks)Ans:
(i) There will be no flow of heat either from the iron ball to water or from water to the iron ball because both are at the same temperature, so heat transfer will not take place.(ii) Heat flows from higher temperature to lower temperature. So, heat will go from the hotter end to the colder end.Ques 30: (i) What is a laboratory thermometer? (ii) Which thermometer is used to measure high temperatures? (iii) Stainless steel pans are usually provided with copper bottoms. Why?     (4 marks)Ans:
(i) A laboratory thermometer is a thermometer used to measure temperatures in the range −10°C to 110°C.(ii) A pyrometer is used to measure  high temperatures.(iii) Stainless steel pans are usually provided with copper bottoms because copper is a better conductor of heat than stainless steel, and hence, food can be cooked at a faster rate.

Ques 32: (i) What is the role played by the stomata in plants?(ii) How do snakes respire?    (5 marks)Ans: (i) Air containing carbon dioxide enters the plant through small openings called stomata. This air is used during photosynthesis and respiration. Oxygen produced during photosynthesis exits the plant through the stomata. Even the excess of water vapour is released into the atmosphere through these pores by the process of transpiration.(ii) In this picture of a DEADLY black mamba you can see the breathing tube at the bottom of the mouth.
They breathe through this opening just behind the tongue called the glottis, which opens into the trachea, or windpipe.Through this opening snakes take breathe.
Snakes don't have a diaphragm so they use muscles along their sides to expand and contract their lungs. Most snakes have only one main, functional lung to obtain oxygen.
When a snake is feeding on a large prey item it can also push its trachea (windpipe) off to the side so it can still breathe with a mouth full of food.