Q.1. Ankit told his sister that the electronic configuration of fluorine (F) is 2,7. Then, asked her to identify what type of bond is present in the F2 molecule.    (1 Mark) Ans: The bond present in F2 molecule is formed by sharing of electrons, hence, it is a covalent bond. 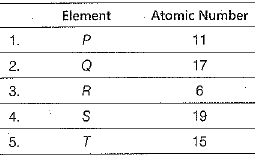 OrThe name of the compoundCH3 - CH2 - CHO is:(a) Propanal(b) Propanone(c) Ethanol(d) EthanaAns: (a) or (a)For question numbers 13 and 14, two statements are given- one labelled Assertion (A) and the other labelled Reason (R). Select the correct answer to these questions from the codes (i), (ii), (iii) and (iv) as given below(i) Both A and R are true and R is correct explanation of the assertion.(ii) Both A and R are true but R is not the correct explanation o f the assertion.(iii) A is true but R is false.(iv) A is false but R is true.Q.13. In each of the following questions, a statement of Assertion is given by the corresponding statement of Reason. Of the statements, mark the correct answer as    (1 Mark) (a) If both Assertion and Reason are true and Reason is the correct explanation of Assertion.(b) If both Assertion and Reason are true, but Reason is not the correct explanation of Assertion.(c) If Assertion is true, but Reason is false.(d) If Assertion is false, but Reason is true.Assertion Evolution is impossible without variations.Reason Only useful variations are transmitted to the next generation.Ans: (c) Variations are the basic pre-requisite and progressive factor for evolution because without variations, no change could occur in individuals and evolution would have been impossible. According to the natural selection theory, only useful variations are transmitted to the next generation, but sometimes small variations which are not useful for organisms are also inherited.Q.14. One lim itation of Mendeleev’s classification is that it could not assign a position to hydrogen.    (1 Mark) Ans: True

Q.15. The diagram shown below is of electrolytic refining of copper 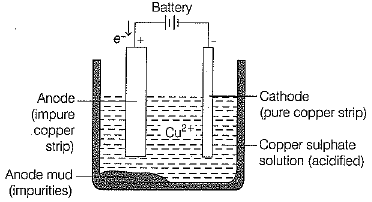 In this process, a thick block of impure metal is used as anode and a thin strip of pure metal is used as cathode. A solution of metal is used as an electrolyte.Draw your own conclusion from the given figure and information and describe it stepwise.    (3 Mark) Ans: (i) When electric current is passed, copper ions from the electrolyte are reduced as copper which get deposited on the cathode.(ii) An equivalent amount of pure copper from the anode get oxidised to copper ion and goes into the solution and from there, it goes to cathode and gets deposited.(iii) Copper is refined. The reactions takes place as follows:At cathode

This cycle is repeated until whole of the copper ion from impure block is dissolved and deposited on cathode.Q.16. Two circular coils P and Q are kept close to each other, of which coil P carries a current. What will you observe in the galvanometer connected across the coil Q (а) if current in the coil P is changed? (b) if both the coils are moved in the same direction with the same speed?Give reason to justify your answer in each case.    (3 Mark) Ans: (a) When current in the coil P is changed, the magnetic field developed in neighbouring coil Q changes. As a result, an induced current is produced in coil Q and the galvanometer connected across it gives a deflection.(b) If both the coils P and Q are moved in the same direction with the same speed, there is no relative motion between the two coils. So the magnetic field of coil Q remains unchanged and no current is induced in it. As a result the galvanometer does not show any deflection.Q.17. The elements Be, Mg and Ca each having two electrons in their outermost shells are in periods 2, 3 and 4 respectively of the modem periodic table. Answer the following questions, giving justification in each case:(i) Write the group to which these elements belotig.(ii) Name the least reactive element.(iii) Name the element having largest atomic radius.    (3 Mark) Ans: (i) Group 2 because they have same number of valence electrons.(ii) Be, because chemical reactivity increases for metals in a group from top to bottom.(iii) Ca, as the atomic size increases from top to bottom in a group/as Ca has four shells.Q.18. What is meant by esterification and saponification reactions of organic compounds.  Explain with the help of chemical equation for each. What is the use of(i) esters and (ii) saponification process?    (3 Mark) Ans: Esterification It is a process in which alcohol and carboxylic acid combine in the presence of cone. H2SO4 to form an ester.

Saponification When an ester reacts with sodium hydroxide, sodium salt of acid (soap) and alcohol is formed. This process for the preparation of soap is known as saponification.

(i) Esters are used in cold drinks, ice creams, perfumes and as an artificial flavouring agents.(ii) Saponification process is used in the manufacture of soaps.Q.19. A white powder is added while baking cakes to make it soft and spongy. Name its main ingredients. Explain the function of each ingredient. Write the chemical reaction taking place when the powder is heated during baking.    (3 Mark) Ans: The white powder (baking powder) is a mixture of sodium hydrogencarbonate and tartaric acid.Sodium hydrogencarbonate releases carbon dioxide gas which makes the cake soft and fluffy. Tartaric acid neutralises th e bitter taste of the salt.Equation for the reaction is given as under:

Q.22. (a) Write two water conducting tissues present in plants. How does water enter continuously into the root xylem?(b) Explain why plants have low energy needs as compared to animals.    (3 Mark) Ans: (a) Water conducting tissue is xylem and its two components that conduct water are xylem tracheids and xylem vessels.In xylem tissue, vessels and tracheids of the roots, stems and leaves are interconnected to form a continuous system of water-conducting channels reaching all parts of the plant. The root hair which are in contact with the soil actively take up mineral ions. This creates a difference in the concentration of these ions between the root and the soil. Water, therefore, moves into the root from the soil to eliminate this difference. This means that there is steady movement of water into root xylem, creating a column of water that is steadily pushed upwards.(b) Plants have low energy needs as compared to animals because -(i) They are not mobile and hence do not require energy for locomotion.(ii) They do not need to digest food.(iii) Their waste products are fewer and either released through leaves or roots.(iv) Most of their body is made of dead cells which provide rigidity and strength to the plant body.Hence, their energy requirements are low.Q.23. A magnetic compass needle is placed in the plane of paper near point A. In which plane should a straight current carrying conductor be placed so that it passes through A and there is no change in the deflection of the compass? Under what condition is the deflection maximum and why?    (3 Mark) Ans: In the plane of the paper itself. The axis of the compass is vertical and the field due to the conductor is also vertical. It could result in a dip of compass needle which is not possible in this case (dips result only if axis of compass is horizontal). The deflection is maximum when the conductor through A is perpendicular to the plane of paper and the field due to it is maximum in the plane of the paper.Q.24. RBCs act as the carrier for oxygen. Analyse and evaluate the adaptations RBCs have for this function.    (3 Mark) Ans: Adaptations of RBCs to act as oxygen carrier are as follows(a) They have biconcave shape, which increases their surface area over volume.(b) They contain haemoglobin (Hb), which binds to oxygen for its efficient transport.(c) They have no nucleus, which helps to make space for haemoglobin.

Or(i) Tap water contains ions which conduct electricity. Distilled water does not contain any ions.(ii) Dry HCI does not produce ions but dilute HCl gives H+ and Cl- , thus turns blue litmus red.(iii) Baking soda does not allow milk to change into lactic acid, which makes milk sour.(iv) An acid dissociates into hydronium ions (H3O+)an d anions when dissolved in water. On diluting an acidic solution, the volume of the solution increases but the number of ions remains the same and thus, the concentration of H3O+ ions per unit volume decreases.(v) Curd and sour substances contain acid which react with Cu and brass to form certain salts that are poisonous in nature and can cause food poisoning.Q.26. Compare the power used in 2Ω resistor in each of the following circuits:    (5 Mark)

∴ Power used in resistance R2 = 2Ω, is given as

and resistance of bulb A,

and resistance of bulb B,

Q.27. (a) Where do plants get each of the raw materials required for photosynthesis?(b) What is the role of the add in our stomach?    (5 Mark) Ans: (a) The raw materials for photosynthesis are : carbon dioxide and water. The plants get carbon dioxide (in gaseous form) horn the atmosphere (through stomata) while the water is obtained from soil (through roots). The energy required for this process is received by chlorophyll from sun in the form of light.(b) The hydrochloric acid (secreted by gastric glands) in our stomach creates an acidic medium which facilitates the action of enzyme pepsin (otherwise this enzyme is present in our stomach in its inactive form pepsinogen).Q.28. The elements of second period are given below:Li, Be, B, C, N, O, F, Ne(i) Identify whether Be and O are metals or non-metals.(ii) Identify the elements that respectively has(a) largest radius(b) smallest radius(iii) Give reason for the variation in atomic radii.    (5 Mark) Ans: (i) Be is a metal, whereas O is a non-metal.(ii) (a) Li has the largest radius.(b) Ne has the smallest radius.(iii) Atomic radius decreases on moving from left to right along a period. This is due to an increase in nuclear charge, which tends to pull the valence electrons closer to the nucleus.Q.29. (a) Distinguish between cross-pollination and self-pollination. Mention the site and product of fertilisation in a flower.(b) Draw labelled diagram of a pistil showing the following parts:Stigma, Style, Ovary, Female germ cellOr(a) Draw a diagram of human female reproductive system and label the parts: (i) which produces an egg. (ii) where fertilisation takes place. (b) List two bacterial diseases which are transmitted sexually. (c) What are contraceptive devices? Give two reasons for adopting contraceptive devices in humans.    (5 Mark) Ans: (a) 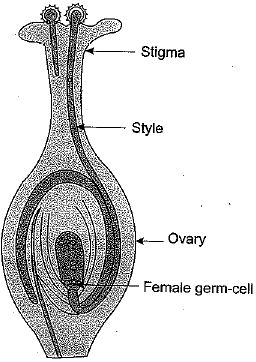 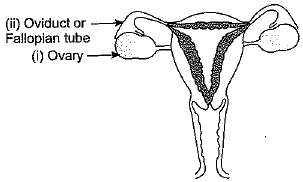 (i) Ovary - Produces egg(ii) Oviduct - Site of fertilisation(b) Two bacterial diseases that are sexually transmitted are - Syphilis and Gonorrhoea.(c) Devices that are adopted to prevent pregnancy are the contraceptive devices. These may be chemicals or objects like hormonal pills, condoms, GuT etc.Reasons for adopting contraceptive devices are:• They help in spacing two children.• Thus helps in maintaining a woman’s and child’s health.• Better care and healthier society.• Also prevention of sexually transmitted diseases on using condoms.• More productivity and hence better economic status.Q.30. An object 60 cm tall is placed on the principal axis of a convex lens and its 30 cm tall image is formed on the screen placed at a distance of 40 cm from the object. What is the focal length of the lens?Or(i) If p, q and r denotes the object distance, image distance and the radius of curvature, respectively of a spherical mirror, then find out the relation between them.(ii) Find the distance at which an object should be placed infront of a convex lens of focal length 10 cm to obtain an image of double its size.    (5 Mark) Ans: As, the image is formed on the screen, thus the image formed is real and inverted in nature.Here, hi = 60 cm, h0=-30 cmLet the object be kept at a distance x cm from the lens.⇒ Image distance, v = (40 - x), f =?As, we know, magnification,

Substituting the values of u and v in the lens formula, we get 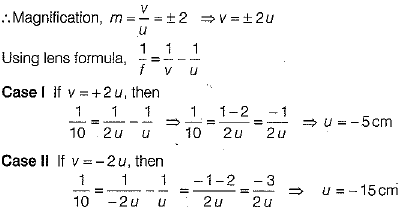