Ques 1: A compound contains A atoms at the corners and B atoms at the centres of all faces. What is the formula of the compound? [1] ORWhat kind of attractive forces are present in molecular crystalline solids?Ans:

Ques 7: Account for the following: [2](a) Alkaline medium inhibits the rusting of iron.(b) Iron does not rust even if the zinc coating is broken in galvanised iron pipes.Ans: (a) Alkalinity of the solution prevents the availability of H+ ions.(b) A galvanised substance is that which has been coated with a layer of zinc to delay corrosion. Zinc gets corroded instead of the substance.The outer layer of zinc of any galvanised material reacts with the atmospheric oxygen to form zinc oxide (ZnO), which is stronger than zinc. Thus, even if the outer layer of zinc undergoes corrosion, the material is getting coated with a stronger substance (ZnO), and thus is better able to resist corrosion.Ques 8: Calculate the overall order of a reaction which has the rate expression [2]

(b) When phenol reacts with conc. HNO3, 2,4,6-trinitrophenol is formed. 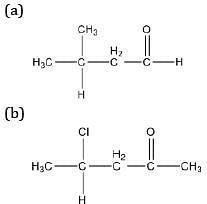 Ques 12: Write the structure of the monomers of the following polymers: [2] (a) PVC (b) PolypropeneAns:

Ques 14: A solution is made by dissolving 30 g of a non-volatile solute in 90 g of water. It has a vapour pressure of 2.8 kPa at 298 K. The vapour pressure of pure water is 3.64 kPa. Calculate the molar mass of the solute. [3]ORCalculate the freezing point of depression expected for 0.0711 m aqueous solution of Na2SO4. If this solution actually freezes at −0.320ͦC , then what would be the value of van’t Hoff factor? (Kf = 1.86ͦC)Ans: According to Rault’s law,

Substituting the values in the above equation, we get

Ques 16: (a) Why are deltas formed at places where the river meets the sea? (b) List two characteristics of catalysts. (c) What are macromolecular colloids? Give an example.[3]Ans: (a) River water is muddy and contains charged colloidal particles of clay, sand and many other materials. Sea water contains in it a number of dissolved electrolytes. When sea water and river water come in contact with each other, the electrolytes present in sea water coagulate the suspended colloidal particles which ultimately settle at the point of contact. Thus, a delta is formed at the point where the river enters the sea.(b) Characteristics of catalysts:(i) Catalysts are highly selective. A catalyst is able to direct a reaction to give a particular product.(ii) Catalysts are highly active. A catalyst is able to increase the rate of a chemical reaction.(c) A colloid in which the particles of dispersed phase are sufficiently big in size to be of colloidal dimensions is called a macromolecular colloid. Example: StarchQues 17: State briefly the principles which serve as the basis for the following operations in metallurgy: [3](a) Froth flotation process (b) Zone refining (c) Refining by liquationAns: (a) The principle of the froth flotation process is that sulphide ore particles are preferentially wetted by oil, whereas gangue particles are wetted by water.(b) Zone refining is based on the principle that the impurities are more soluble in the melt than in the solid state of the metal.(c) The principle of refining by liquation is that the impurities whose melting points are higher than the metal are left behind on melting the impure metal. Hence, pure metal separates out.Ques 18:  Complete the following chemical equations: [3] 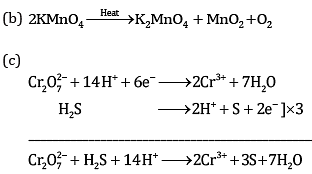 F− is a weak field ligand and therefore does not cause pairing of electrons.There are four unpaired electrons.

NH3 is a strong field ligand and causes pairing of electrons. Hence, there are no unpaired electrons.  (c) Hydrate isomerismQues 20: Answer the following questions: [3](a) What is meant by chirality of a compound? Give an example.(b) Which of the following compounds is more easily hydrolysed by KOH and why?CH3CHClCH2CH3 or CH3CH2CH2Cl(c) Which one undergoes SN2 substitution reaction faster and why?

OR(a) Give a chemical test to distinguish between chlorobenzene and benzyl chloride.(b) Identify A, B, C and D: 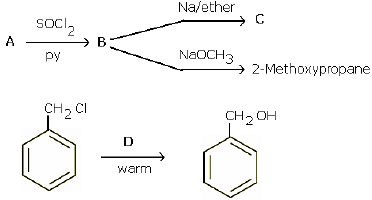 Ans: (a) Chiral molecules are those molecules which are non-superimposable on their mirror images, and this property is known as chirality. Butan-2-ol is an example of a chiral molecule.Due to the –I effect of alkyl groups, the secondary carbanion ion

derived from n-propyl chloride. Therefore, the secondary butyl chloride gets hydrolysed more easily than n-propyl chloride under SN1 conditions.(c) As iodine is a better leaving group because of its large size, it will be released at a faster rate in the presence of incoming nucleophiles.OR(a) Add a small amount of aqueous KOH to both compounds. Acidify with dil. HNO3 and add AgNO3. Benzyl chloride gives white precipitate, while chlorobenzene does not.(b) 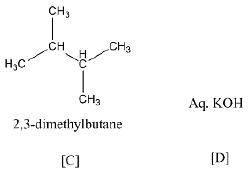 Ques 21: Give the equation of the following reactions: [3] (a) Oxidation of propan-1-ol with alkaline KMnO4 solution. (b) Bromine in CS2 with phenol. (c) Dilute nitric acid with phenol.Ans: (a)

Ques 22: In the following cases, rearrange the compounds as directed: [3](a) In the increasing order of basic strength:

Ans: (a) In increasing order of basic strength:

(b) In decreasing order of basic strength:

Ques 23: Name three fat-soluble vitamins, their source and the diseases caused by their deficiency in the diet. [3]ORExplain the following terms: (a) Peptide linkage (b) Pyranose structure of glucose (c) Glycosidic linkageAns: 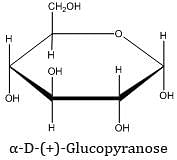 (c) Glycosidic linkage: The linkage between two monosaccharide molecules through oxygen atom in a disaccharide or polysaccharide is known as a glycosidic linkage.Ques 24: Give reason for the following: [3] (a) Sulpha drugs work like antibiotics, but they are not antibiotics. (b) Aspirin helps in the prevention of heart attack. (c) Soaps are biodegradable, whereas detergents are non-biodegradable.Ans: (a) This is because sulpha drugs are purely prepared synthetically. Antibiotics may be either wholly or partially obtained from microorganisms.(b) Aspirin helps in the prevention of heart attack because of its anti-blood clotting action.(c) Soaps are biodegradable because their molecular structure has a straight chain which is easy to break and degrade by bacteria present in sewage water, whereas the molecules of detergents have a branched chain which is difficult to break. The branched chain may or may not be attacked by bacteria. Hence, detergents are non-biodegradable.

The EӨ value for this is positive and the reaction is favourable.OR(a)

(b)On increasing pH, the solution turns yellow due to the formation of chromate ion.

Ques 26: The emf of the cell reaction 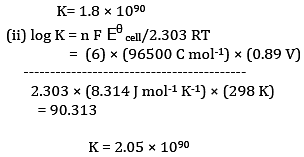 OR(a) Since the reduction potential of Ag+/Ag is more than that of Cu2+/Cu, Ag+ gets reduced to Ag at the cathode and Cu gets oxidised to Cu2+ at the anode.At the cathode:

Therefore, the net reaction is 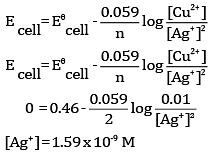 Ques 27: (a) Ethanol reacts with acetic acid in the presence of conc. H2SO4 to give a sweet smelling substance. Give the equation involved in the reaction. [5](b) Write a note on(i) Rosenmund’s reduction(ii) Hell Volhard Zelinsky reaction  OR(a) Complete the equations:

(b) Semicarbazide contains two NH2 groups, but only one participates in the reaction with carbonyl compounds. Why?(c) Which of the two will give a yellow precipitate with iodine and sodium hydroxide: pentan-2-one or pentan-3-one?Ans: (a)

(b) (i) In Rosenmund’s reaction, acid chlorides are subjected to catalytic hydrogenation in the presence of Pd supported over BaSO4 to yield corresponding aldehyde. The catalyst is poisoned by S or quinoline.

(b) NH2CONHNH2, semicarbazide contains two NH2 groups, but the one next to the CO group is involved in resonance with C=O and is thus not available.(c) Pentan-2-one will give a yellow precipitate with iodine and sodium hydroxide  because it contains the group