The document Short & Long Question Answers: Motion & Time Notes | Study Science Class 7 - Class 7 is a part of the Class 7 Course Science Class 7.
All you need of Class 7 at this link: Class 7

Q1: What are the points that should be kept in mind while choosing scale for drawing graph?

Q2: What is the advantage of a distance- time graph?

Q3: Differentiate between distance and displacement.

Ans : An object is said to be moving with uniform speed if it covers equal distances in equal intervals of time. But when we travel in a vehicle the speed of the vehicle changes from time to time depending upon the conditions existing on the road. In such a situation, the speed is calculated by taking the ratio of the total distance travelled by the vehicle to the total time taken for the journey. This is called the average speed.

Q5: What do you mean by non-uniform speed?

Ans : An object is said to be moving with variable speed or non-uniform speed if it covers equal distances in unequal intervals of time or vice-versa.

Q6: What do you mean by instantaneous speed?

Q7: A child is on see-saw, what kind of motion he have and why? Explain.

Ans : On a see-saw child goes up and comes down from mean position and repeats itself .So there is oscillatory motion.

Q8: Explain how in ancient time a day, a month and a year were measured.

Ans : In ancient time the time between one sunrise and the next was called a day. A month was measured from one new moon to the next and a year was fixed as the time taken by the earth to complete one revolution of the sun.

Q9: Define velocity along with its unit.

Ans : Velocity can be defined as the rate of change of displacement.SI unit of velocity is m/s (meter/second Velocity is a vector quantity.

Q10: What are quartz clocks?

Ans : It is a special type of clock or watch which have an electric circuit with one or more cells are called quartz clocks.

Q11: How do we know an object is moving faster compared to the speed of another object?

Ans : By finding the distance travel by a moving body in unit time 1 hr. or 1 sec we know the speed of an object that help us to know which one is moving faster i.e. having greater speed.

Q12: A simple pendulum takes 15 seconds to complete 5 oscillations. What is the time period of pendulum?

The time taken by pendulum to complete 5 oscillation = 15sec

Q13: If a car is moving with a speed of 5Km/h on highway then find the distance travelled by the car in 4 hours?

We know distance travelled by a body = speed X time

Q14: Sumit covers a distance of 2.4 Km from his house to reach her college on a scooter. If the scooter has a speed of 6m/sec, calculate the time taken by her to reach the college.

Q15: How can you say that motion and rest are relative?

Ans : We have observed that the position of stars and planets change while you remain stationary. In reality the earth is moving too. Thus, an object which appears to be at rest, may actually be in motion. Therefore, motion and rest are relative terms.

Q17: Give an example when objects undergo combinations of different types of motion?

Q18: What is simple pendulum?

Ans : A simple pendulum consists of a small metallic ball or a piece of stone suspended from a rigid stand by a thread .The metallic ball is called the bob of the pendulum.

Q19: What is oscillation of a pendulum?

Following are different types of motion:

Ans : The interval between two events is called time. Example: The time between one sunrise and the next was called a day. Clocks or watches are the most common time measuring devices. The basic unit of time is a second. Its symbol is s. Larger units of time are minutes (min) and hours (h).

Q22: Explain how we can plot a graph.

To plot a graph on a graph sheet:

-At the centre of the paper, draw two lines perpendicular to each other Mark the point of intersection of the lines as ‘O. The horizontal line is called the X-axis, while the vertical line is called the Y-axis. The point of intersection of the two axes is called the origin, "O". Take one quantity along the X-axis and the other along the Y-axis, after choosing suitable scales for both. For every value along one axis, mark a point matching the related value on the other axis. Join the points, and your graph is ready.

Q23: A simple pendulum takes 32 s to complete 20 oscillations. What is the time period of the pendulum?

Q25: Salma takes 15 minutes from her house to reach her school on a bicycle. If the bicycle has a speed of 2 m/s, calculate the distance between her house and the school.

Q26: The distance between two stations is 300 km. A train takes 6 hours to cover this distance. Calculate the speed of the train.

The distance between two stations = 300 km

Time taken by the train to cover that distance = 6 hours

Q27: Show the shape of the distance-time graph for the motion in the following cases when a car is moving with a constant speed. 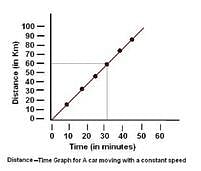 Q28: Show the shape of the distance-time graph for the motion when a car parked on a side road. 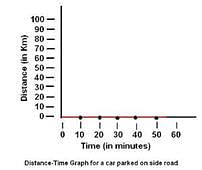 Q29: Look at the graph below of two vehicles A and B, which one of them is moving faster. 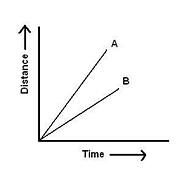 Distance covered by the car with a speed

Distance covered by the car with a speed

Q1: Classify the following as motion along a straight line, circular or oscillatory motion:

Motion of our hands while running

Motion of a horse pulling a cart on a straight road.

Motion of a kid in a merry-go-round.

Motion of a child on a see-saw.

Motion of the hammer of an electric bell.

Motion of a train on a straight bridge

Motion of our hands while running. : - oscillatory motion

Motion of a horse pulling a cart on a straight road. :- straight line motion

Motion of a kid in a merry-go-round. : - straight line motion

Motion of a child on a see-saw. : - oscillatory motion

Motion of the hammer of an electric bell.- oscillatory motion

Motion of a train on a straight bridge : - straight line motion

The document Short & Long Question Answers: Motion & Time Notes | Study Science Class 7 - Class 7 is a part of the Class 7 Course Science Class 7.
All you need of Class 7 at this link: Class 7