In the simple present, most regular verbs use the root form, except in the third-person singular (which ends in -s).

For a few verbs, the third-person singular ends with -es instead of -s. Typically, these are verbs whose root form ends in o, ch, sh, th, ss, gh, or z.

For most regular verbs, you put the negation of the verb before the verb, e.g. “She won’t go” or “I don’t smell anything.” The verb to be is irregular:

➢ How to Make the Simple Present Negative?

Try yourself:Susan _______ a lot of time surfing the net every day.
View Solution

➢ How to Ask a Question?

Table: The Verb to Be in the Simple Present

➢ Uses of Simple Present Tense1. To show a habit

2. To express a general truth

3. To express an action with a future time expression 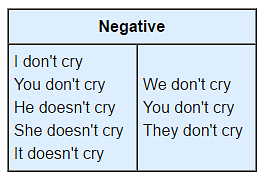