Operation and analysis of single phase half controlled converters

On completion the student will be able to 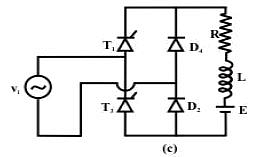 Operating principle of a single phase half controlled bridge converter

With reference of Fig 11.1 (b), it can be stated that for any load current to flow one device from the top group (T1 or T3) and one device from the bottom group must conduct. However, T1 T3 or D2 D4 cannot conduct simultaneously. On the other hand T1 D4 and T3 D2 conducts simultaneously whenever T1 or T3 are on and the output voltage tends to go negative. Therefore, there are four operating modes of this converter when current flows through the load. Of course it is always possible that none of the four devices conduct. The load current during such periods will be zero. The operating modes of this converter and the voltage across different devices during these operating modes are shown in the conduction table of Fig 11.2. This table has been prepared with reference to Fig 11.1 (b). 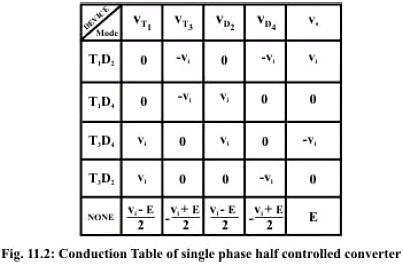 Fill in the blanks(s) with the appropriate word(s)

2. Find out an expression of the ration of the thyristor to diode RMS current ratings in the single phase half controlled converter topologies of Fig. 11.1(b) & (c). Assume ripple free continuous output current. Answer

Single phase half controlled converter in the continuous conduction mode

From the conduction table and the discussion in the previous section it can be concluded that the diode D2 and D4 conducts for the positive and negative half cycle of the input voltage waveform respectively. On the other hand T1 starts conduction when it is fired in the positive half cycle of the input voltage waveform and continuous conduction till T3 is fired in the negative half cycle. Fig. 11.3 shows the circuit diagram and the waveforms of a single phase half controlled converter supplying an R – L – E load. 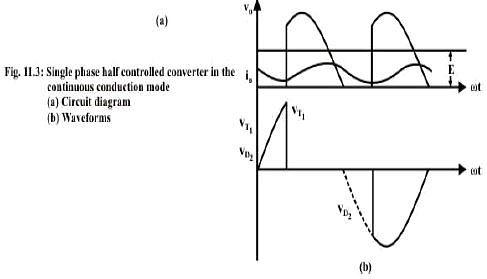 Referring to Fig 11.3 (b) T1 D2 starts conduction at ωt = α. Output voltage during this period becomes equal to vi. At ωt = π as vi tends to go negative D4 is forward biased and the load current commutates from D2 to D4 and freewheels through D4 and T1. The output voltage remains clamped to zero till T3 is fired at ωt = π + α. The T3 D4 conduction mode continues upto ωt = 2π. Where upon load current again free wheels through T3 and D2 while the load voltage is clamped to zero.

From the discussion in the previous paragraph it can be concluded that the output voltage (hence the output current) is periodic over half the input cycle. Hence 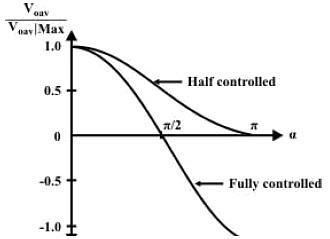 Clearly in addition to the average component, the output voltage (and current) contains a large number of harmonic components. The minimum harmonic voltage frequency is twice the input supply frequency. Magnitude of the harmonic voltages can be found by Fourier series analysis of the load voltage and is left as an exercise.

The Fourier series representation of the load current can be obtained from the load voltage by applying superposition principle in the same way as in the case of a fully controlled converter.

However, the closed form expression of io can be found as explained next.

The input current ii is given by

However, it will be very difficult to find out the characteristic parameters of ii using equation 11.14 since the expression of i0 is considerably complex. Considerable simplification can however be obtained if the actual ii waveform is replaced by a quasisquare wave current waveform with an amplitude of Ioav as shown in Fig 11.5. 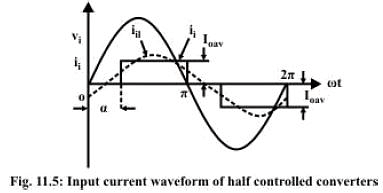 Single phase half controlled converter in the discontinuous conduction mode.

So far we have discussed the operating characteristics of a single phase half controlled converter in the continuous conduction mode without identifying the condition required to achieve it. Such a condition exists however and can be found by carefully examining the way this converter works.

Fig. 11.6 shows the wave forms in these two cases 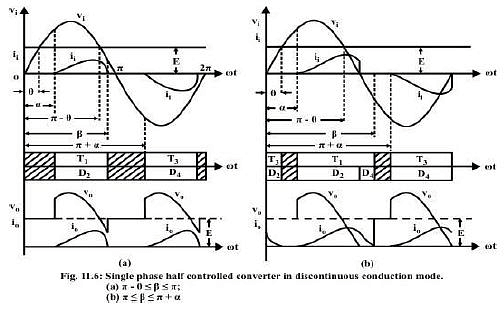 Of these two cases the second one will be analyzed in detail here. The analysis of the first case is left as an exercise.For this case

However IORMS cannot be computed directly from VORMS. For this the closed form expression for io has to be obtained. This will also help to find out an expression for the conduction angle β.

Fill in the blank(s) with the appropriate word(s).

2. A single phase half controlled converter charges a 48v 50Ah battery from a 50v, 50Hz single phase supply through a 50mH line inductor. The battery has on interval resistance of 0.1Ω. Thefiring angle of the converter is adjusted such that the battery is charged at C/5 rate when it is fully discharged at 42 volts. Find out whether the conduction will be continuous or discontinuous at this condition. Up to what battery voltage will the conduction remain continuous? If the charging current of the battery is to become zero when it is fully charged at 52 volts what should be the value of the firing angle.

Q1. The thyristor T3 of Fig 1.1(b) fails to turn on at the desired instant. Describe how this circuit will work in the presence of the fault.

Q2. A single phase half controlled converter is used to boost the no load speed of a separately excited dc machine by weakening its field supply. At α = 0° the half controlled converter produces the rated field voltage. If the field inductance is large enough to make the field current almost ripple face what will be the input power factor when the dc motor no load speed is bossed to 150%?