The document Solution of Control and Coordination (Page No - 117 - Biology by Lakhmir Singh, Class 10 Class 10 Notes | EduRev is a part of the Class 10 Course Class 10 Biology Solutions By Lakhmir Singh & Manjit Kaur.
All you need of Class 10 at this link: Class 10

Question 52:
When you smell a favourite food your mouth begins to water (that is, you secrete saliva). Write down what the following are examples of :
(a) the smell of the food
(b) the cells in your nasal passages which perceive the smell
(c) the gland which is stimulated to secrete saliva.
Solution :
(a) Stimulus.
(b) Receptors (Olfactory).
(c) Effector (Salivary glands).

(c) Autonomic nervous system means self governing nervous system. Its function is to control and regulate the functions of the internal organs of our body involuntarily.
(d) The voluntary nervous system is a system which helps us to take voluntary actions which are under the conscious control of the brain. Example: If a student is getting late for school and sees his watch. He starts walking fast. In this process, the eyes see the time and send the information to the brain through the sensory nerves. The brain analyses the information and sends the instructions to walk faster to the muscle of our legs through the motor nerves. The muscles of the legs act accordingly and make the student walk faster.

Question54:
(a) What is a reflex action ? Explain with the help of an example.
(b) Define reflex arc. Give the flow chart of a spinal reflex arc.
(c) How are involuntary actions and reflex actions different from each other ?
Solution :
(a) The rapid, automatic response to a stimulus which is not under the voluntary action of the brain is called reflex action.Example: Moving our hand away on touching a hot plate. 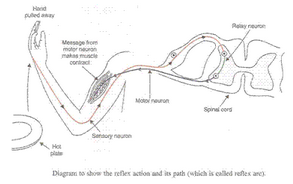 (b) The pathway taken by the nervous impulse in our reflex action is called the reflex arc. A reflex arc (This is actually a spinal reflex arc) A neuron ( or nerve cell) 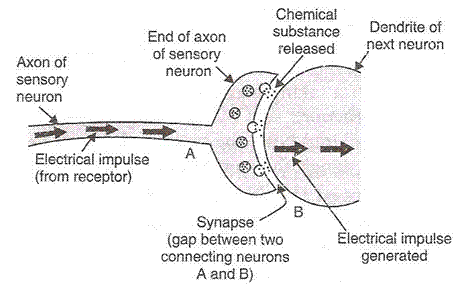 Question 57:
(a) Name two systems which taken together perform the functions of control and coordination in human beings.
(b) What does the central nervous system in humans consist of ? What is the job of the central nervous system ?
(c) Give the various functions of brain.
Solution :
(a) Nervous system and endocrine system.
(b) The central nervous system consists of the brain and spinal cord. The work of the CNS is to direct incoming messages to the motor neurons that are connected to the part of the body which will respond to a stimulus. It is involved in complicated responses where both (brain and spinal cord) work. It enables a person to give a more appropriate and more intelligent response to various situations.
(c)
(i) The brain receives information carrying nerve impulses from all the sensory organs of the body.
(ii) It responds to the impulses brought in by sensory organs by sending its own instructions through motor nerves to the muscles and glands causing them to function accordingly.
(iii) It correlates the various stimuli from different sense organs and produces the most appropriate and intelligent response.
(iv) It coordinates the body activities so that the mechanisms and chemical reactions of the body work together efficiently.
(v) It stores information so that behavior can be modified according to the past experience.

Question 58:
(a) Write the names of five endocrine glands found in the human body. Name the hormones secreted by each gland.
(b) How do hormones reach the organs they control ?
(c) Name the gland which controls the secretion of hormones from the pituitary.
(d) How does our body respond when adrenaline is secreted in large amounts into the blood ?
(e) Name the disease which occurs in adults due to the deficiency of iodine in the diet. What is the main symptom of this disease ?
Solution :
(a)
(i) Pituitary – Growth.
(ii) Thyroid – Thyroxine.
(iii) Pancreas – Insulin.
(iv) Adrenal – Adrenaline.
(v) Testes – Testosterone.
(b) The endocrine glands do not have ducts to secrete their hormones. They release hormones directly into the blood of a person and reach the concerned body part through the blood and act on it.
(c) Hypothalamus.
(d) The adrenaline hormone prepares our body to function at maximum efficiency during emergency situations like danger, anger etc. This adrenaline hormone increases our heartbeat, breathing rate, blood flow into muscles and causes liver to put more stored glucose into our blood. All these actions produce a lot of energy in our body and help us to cope up the emergency situations. Thus, when adrenaline is secreted in large amounts it prepares our body for action. (e) Goitre – The neck of the person appears to be swollen due to the enlargement of thyroid gland located in the neck.