Question 15:
What is Ohm’s law ? Explain how it is used to define the unit of resistance.
Solution :
Ohm’s law gives a relationship between current (I) and potential difference (V). According to ohm’s law: At constant temperature, the current flowing through a conductor is directly proportional to the potential difference across its ends.
If I is the current flowing through a conductor and V is the p.d. across its ends, then according to the ohm’s law:

where, R is a constant called "resistance" of the conductor. The unit of resistance is ohm.

Thus, 1 ohm is  the resistance of a conductor such that when a potential differenoe ot 1 volt is applied to its ends, a current of 1 amp flows through it.

Question 16:
(a) What is meant by the “resistance of a conductor” ? Write the relation between resistance, potential
difference and current.
(b) When a 12 V battery is connected across an unknown resistor, there is a current of 2.5 mA in the circuit. Calculate the value of the resistance of the resistor.
Solution :
(a) The property of a conductor due to which it opposes the flow of current through it is called resistance of the conductor.
Work done = Potential difference x charge moved.
(b) V = 12volt, I=2.5 x 10-3 A
We know that
V=IR
R=V/I
R=12/(2.5X10-3)
R=4.8X103ohm = 4800 ohm.

Question 19:
An electric circuit consisting of a 0.5 m long nichrome wire XY, an ammeter, a voltmeter, four cells of 1.5 V each and a plug key was set up.
(i) Draw a diagram of this electric circuit to study the relation between the potential difference maintained between the points ‘X’ and ‘Y’ and the electric current flowing through XY.
(ii) Following graph was plotted between V and I values :

(iii) What is the resistance of the wire ?
Solution : 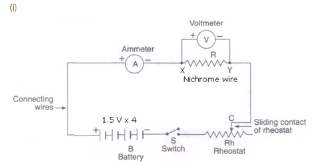 (ii) Since the graph is a straight line passing through the origin so current is directly proportional to the potential difference. Hence, die ratior V/I remains constant.

The resistance of the wire is. equal to the ratio of potential difference applied and the currrent passing through it.

Plot a graph between V and I, and calculate the resistance of the resistor.

Question 31:
Name the electrical property of a material whose symbol is “omega”.
Solution :
Resistance.

Question 32:
The graph between V and 1 for a conductor is a straight line passing through the origin.
Which law is illustrated by such a graph ?
What should remain constant in a statement of this law ?
Solution :
(a) Ohm’s law
(b) Temperature.