The document Solutions of Magnetic Effects of Electric Current (Page No- 84) - Physics By Lakhmir Singh, Class 10 Class 10 Notes | EduRev is a part of Class 10 category.
All you need of Class 10 at this link: Class 10 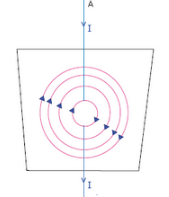 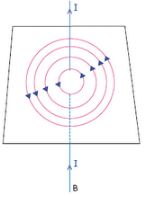 Question 38: The figure shows a solenoid wound on a core of soft iron. Will the end A be a N pole or S pole when the current flows in the direction shown ?

Solution : End A will be a S-pole because current flows in the clockwise direction at A. 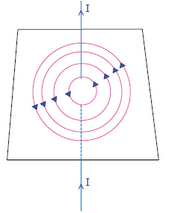 Maxwell’s right hand thumb rule. is used to find out the direction of magnetic field.

Question 40: For the coil in the diagram below, when the switch is pressed :
(a) what is the polarity of end A ?
(b) which way will the compass point then ?

Solution : (a) End A becomes S-pole because current flows in clockwise direction at A.
(b) When A becomes S-pole, the other end becomes N-pole. So the tip of the compass (with also has North polarity) moves away from this end i.e., tip moves towards right.

Question 41: A current flows downwards in a wire that passes vertically through a table top. Will the magnetic field lines around it go clockwise or anticlockwise when viewed from above the table ?

Solution : Magnetic field lines around it will be clockwise (according to Maxwell’s right hand thumb rule).

Question 44: A current-carrying conductor is held in exactly vertical direction. In order to produce a clockwise magnetic field around the conductor, the current should be passed in the conductor :
(a) from top towards bottom
(b) from left towards right
(c) from bottom towards top
(d) from right towards left

Solution : (a) from top towards bottom.

Question 45: A thick wire is hanging from a wooden table. An anticlockwise magnetic field is to be produced around the wire by passing current through this wire by using a battery. Which terminal of the battery should be connected to the :
(a) top end of wire ?
(b) bottom end of wire ?
(c) Give reason for your choice.

Solution : (a) Negative terminal
(b) Positive terminal
Because the current should be passed into wire upwards.