Question 30: (a) With the help of a labelled diagram, explain how a concave lens diverges a beam of parallel light rays.
Mark the principal axis, optical centre, principal focus and focal length of the concave lens on the diagram.
(b) State whether concave lens has a real focus or a virtual focus.
(c) List some things that concave lens and convex mirror have in common. 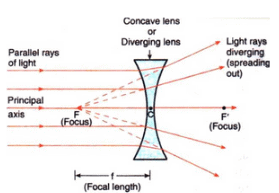 Figure — A concave lens diverges (spreads out) a parallel beam of light rays.

When a beam of light rays parallel to one another and also to the principal axis of the concave lens fall on the lens, the incident rays pass through the lens and get refracted according to the laws of refraction. All the rays spread out after passing through the lens. These diverging rays when produced backwards appear to meet at a point F (focus) on the left side of the lens.
(b) A concave lens has a virtual focus.
(c) Both, concave lens and convex mirror, diverge parallel rays of light coming from infinity (parallel to the principal axis).

Question 31: Draw ray diagrams to represent the nature, position and relative size of the image formed by a convex lens for the object placed :
(a) at 2F1,
(b) between F1and the optical centre O of the lens.
Which of the above two cases shows the use of convex lens as a magnifying glass ? Give reasons for your choice.

(b) Object between F1 and the optical centre O of the lens : 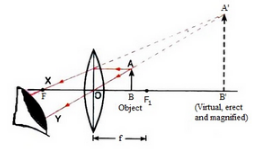 The case when object is between F1 and the optical centre O of the lens shows the use of convex lens as a magnifying glass. This is because here the image formed is erect and magnified.

Question 32: (a) An object is placed well outside the principal focus of a convex lens. Draw a ray diagram to show how
the image is formed, and say whether the image is real or virtual.
(b) What is the effect on the size and position of the image of moving the object (i) towards the lens, and (ii) away from the lens ? (b) (i) If object is moved towards the lens, the image size will keep on increasing till the object reaches focus. After that, the size decreases but the image remains magnified. The image keeps movingvaway from the lens (on the opposite side of the lens) till the object reaches focus; after that the image is formed on the same side of the lens as the object.
(ii) If object is moved away from the lens, the size will keep on decreasing and the image keeps on shifting towards the lens.

Question 33: (a) Explain what is meant by a virtual, magnified image.
(b) Draw a ray diagram to show the formation of a virtual magnified image of an object by a convex lens. In your diagram, the position of object and image with respect to the principal focus should be shown clearly.
(c) Three convex lenses are available having focal lengths of 4 cm, 40 cm and 4 m respectively. Which one would you choose as a magnifying glass and why ?

Solution : (a) A virtual magnified image is the one which cannot be taken on a screen and whose size is larger than that of the object.

Figure - Formation. of image by a convex lens when the object is placed between its optical center (C) and focus (F).

Question 34: (a) Explain why, a real image can be projected on a screen but a virtual image cannot.
(b) Draw a ray diagram to show the formation of a real diminished image of an object by a convex lens. In your diagram, the position of object and image with respect to the principal focus should be shown clearly.
(c) Name one simple optical instrument in which the above arrangement of convex lens is used.